NASHVILLE, Tenn. – Vanderbilt matched an SEC record with 13 players selected in the 2019 Major League Baseball Draft. The Commodores become the third team with as many taken, joining Texas A&M (2016) and Kentucky (2018). 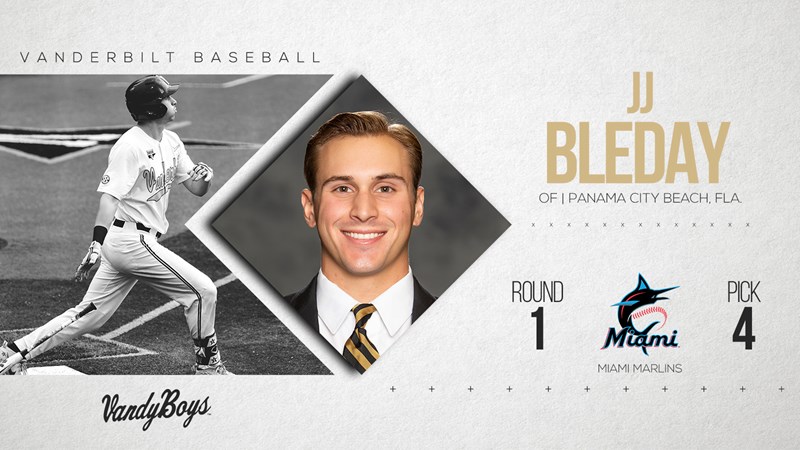 Right fielder JJ Bleday leads the nation in home runs (26) and paces the SEC in slugging percentage (.739) and total bases (178). Bleday has reached base in 87 of his last 88 games and is riding a 41-game on-base streak entering the NCAA Super Regionals.

Bleday was named both SEC Player of the Year and SEC Tournament MVP after helping lead the Commodores to their first conference regular season championship since 2013, first league tournament title since 2007 and eighth super regional appearance in the last 10 seasons. 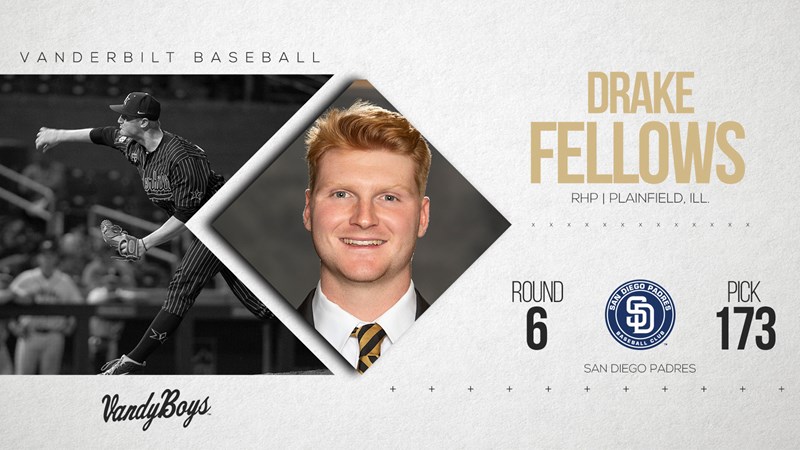 Right-hander Drake Fellows was taken in the sixth round with the 173rd overall pick on Tuesday afternoon. The Plainfield, Illinois, native is tied for the national lead in victories (12) and is 18th with 117 strikeouts.

Fellows is tied for third in Vanderbilt single-season wins (12), two off Carson Fulmer (2015) and Tyler Beede’s (2013) program-best 14. He is seventh in team history for career strikeouts (292) and has not allowed more than two earned runs in seven of his last 11 starts. 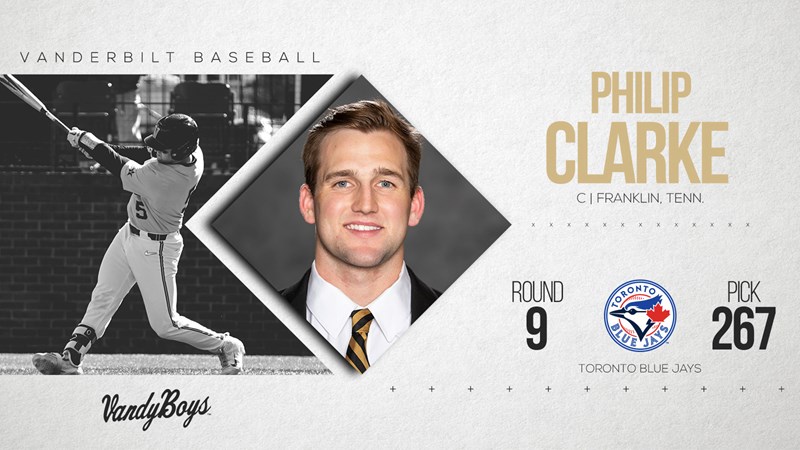 Philip Clarke was picked up in the ninth round (pick 267) by the Toronto Blue Jays. The sophomore is tied for second in the SEC with four triples and is third with 65 RBIs. The catcher has thrown out 11 would-be stealers and picked off a pair.

The Franklin, Tennessee, native recorded 14 multi-hit performances and batted .395 (15-for-38) with two outs in SEC contests. His most memorable contribution came in the SEC Tournament championship when he lined a game-winning RBI-single into center field to cap an 11-10 comeback victory against Ole Miss. 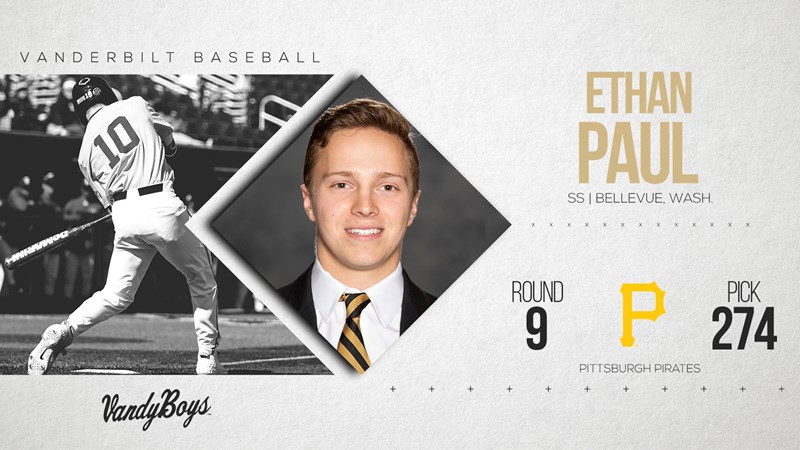 For a second consecutive season shortstop Ethan Paul heard his name called by the Pittsburgh Pirates. The shortstop was drafted in the ninth round with the 274th pick by the organization, becoming the 36th infielder in program history to be selected.

Paul ranks second in Vanderbilt career history with in doubles (62), one off the program lead. The Bellevue, Washington, native ranks fourth in single-season RBIs (70) and fifth in career RBIs (172). He has recorded a hit in 28 of his last 34 games and scored a run in 20 of his last 23 games. 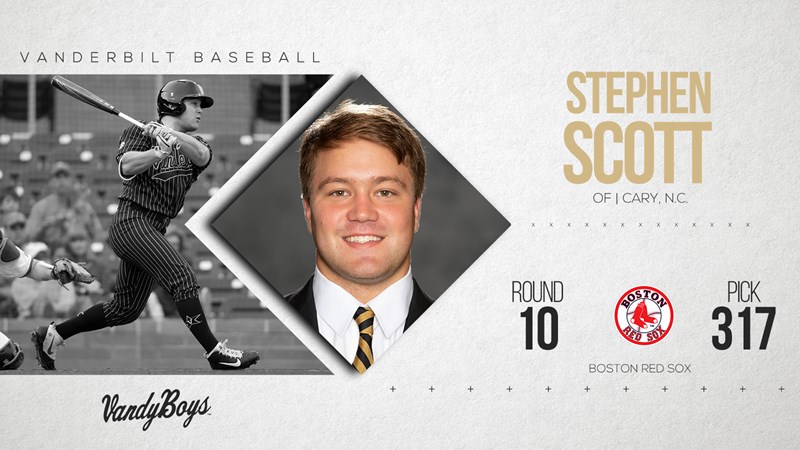 Stephen Scott was drafted in the 10th round (pick 317) by the Boston Red Sox. The senior has collected 22 multi-hit games and has reached base in his last 11 games. The Cary, North Carolina, native is tied for second on the team with 11 home runs one season after leading the club with 15. 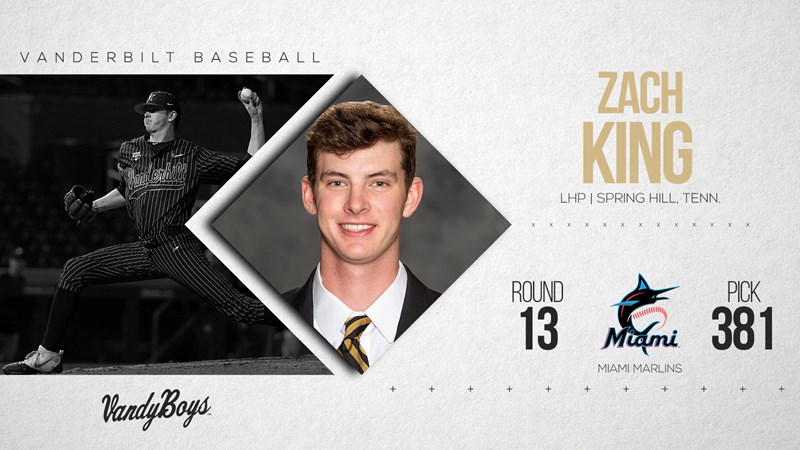 Left-hander Zach King became the second Commodore taken by the Marlins in the draft, going with pick 381 in the 13th round. The Spring Hill, Tennessee, native has multiple batters in five of his last seven outings and allowed just two extra-base hits in his last 14 appearances (20.0 innings).

King finished tied for the team lead with 21 appearances in 2018 while posting a 3.46 ERA including making three starts. He has limited opponents to a .232 batting average in 124.1 career innings. King owns 122 career strikeouts and has picked up three saves each of the last two seasons. 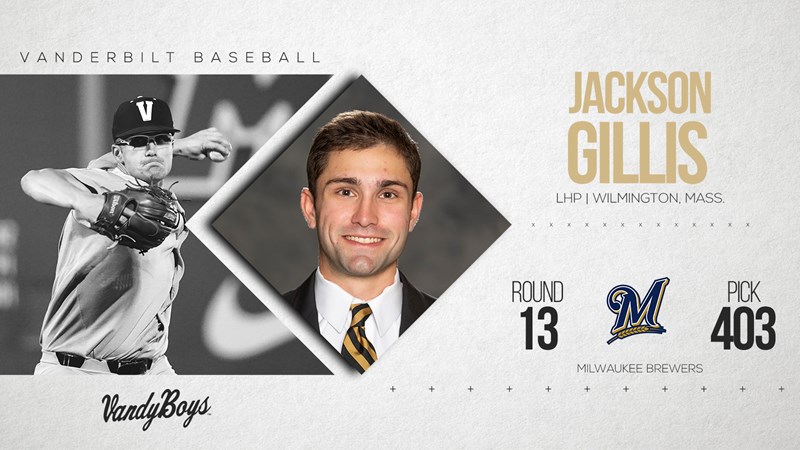 Fellow southpaw Jackson Gillis was selected 22 picks later (403) by the Milwaukee Brewers. The junior posted a 4-1 record and 4.81 ERA across 20 appearances including one start a season ago. He struck out 39 batters and tossed 28.2 frames while helping the Dores to the super regionals.

The Wilmington, Massachusetts, native became the first Commodore in the Tim Corbin era to record a win and save on the same day, doing so in doubleheader action against Ole Miss on April 15, 2018. He has held opponents scoreless in six of his last eight starts including a scoreless frame at Middle Tennessee. 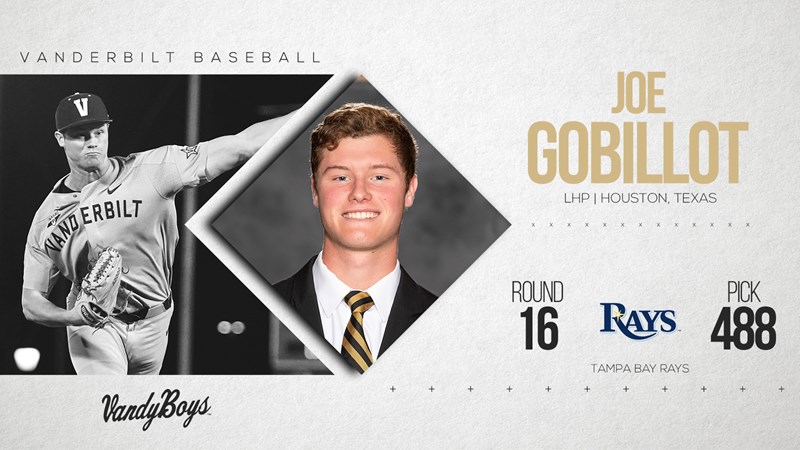 Lefty Joe Gobillot was selected in the 16th round (pick 488) by the Tampa Bay Rays. The hard-throwing redshirt freshman was named a Rawlings-Perfect Game Honorable Mention All-American as a senior at St. John’s in Houston.

The former high school team captain made a pair of appearances with the Commodores including an impressive collegiate debut against Middle Tennessee, striking out the side on April 9. He also entered in relief against Tennessee Tech on April 30. 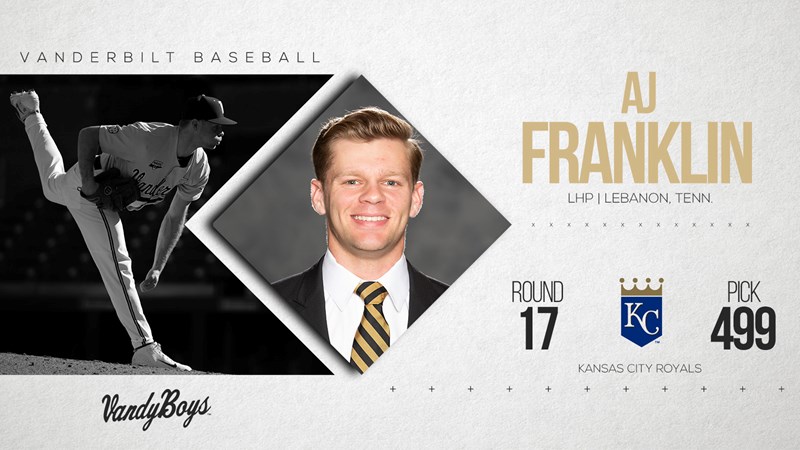 Commodore southpaw AJ Franklin was next off the board, being taken in the 17thround (pick 499) by the Kansas City Royals. The redshirt junior has made 16 career appearances, with the most memorable coming on May 7 at No. 6 Louisville when he secured the win with three strikeouts in 2.1 innings.

Franklin has permitted just 10 hits and five runs in his last 12.2 innings. He closed out Vanderbilt’s 12-2 win against Arkansas with a hitless frame. The Lebanon, Tennessee, native made three appearances in 2018, holding opponents hitless in 2.2 innings. 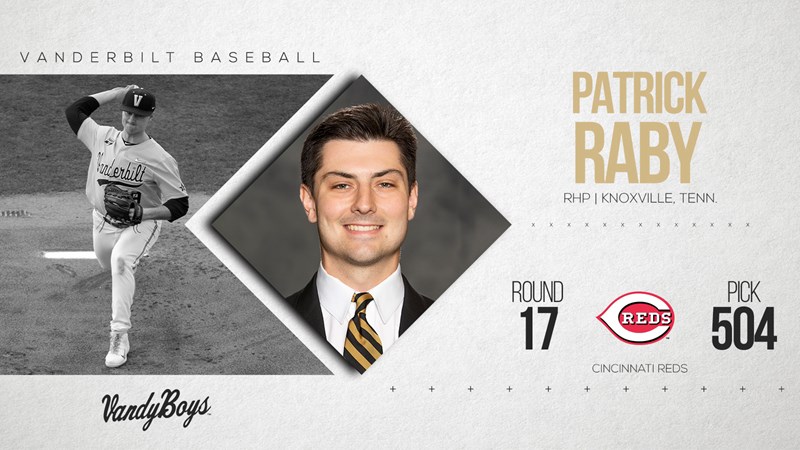 Senior Patrick Raby was selected in the 17th round (pick 504) by the Cincinnati Reds. The Knoxville, Tennessee, native is Vanderbilt’s all-time winningest pitcher, breaking a 46-year-old program record with his 30th win coming May 5 at South Carolina.

Raby ranks seventh in Vanderbilt career innings pitched (303.1) and is 10th in career strikeouts (280). He’s also eighth in career history for ERA (2.94). Raby is currently tied for fourth in the SEC and 22nd nationally with nine victories.

The righty has not allowed more than one earned run in nine of his 15 starts and has fanned five-plus batters nine times. He has allowed just 10 extra-base hits in 71.1 innings. Raby was named a 2016 Collegiate Baseball Freshman All-American. 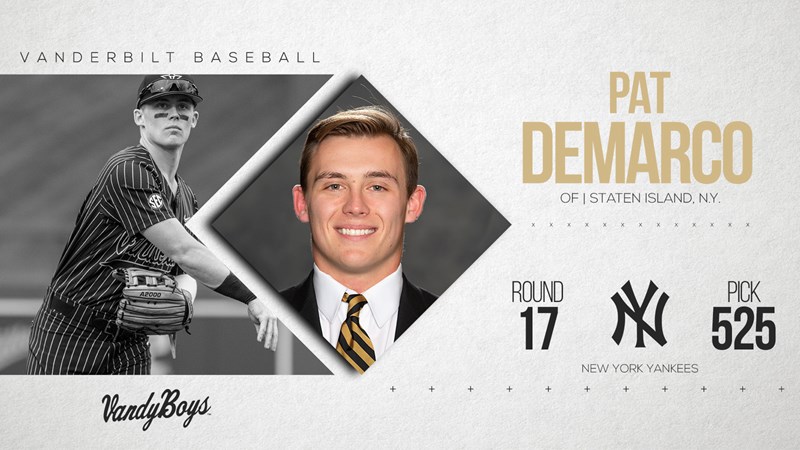 Staten Island, New York, native Pat DeMarco was taken by the New York Yankees, becoming the third Commodore to be selected in the 17th round. The sophomore was named to the 2019 SEC All-Tournament Team and has registered a hit in 27 of his last 34 games.

DeMarco tied a Vanderbilt NCAA Tournament record with three walks against Ohio State. He has recorded 31 hits in his last 23 games. DeMarco was named a Collegiate Baseball Freshman All-American a season ago after leading the Commodores with 48 runs and 116 total bases. 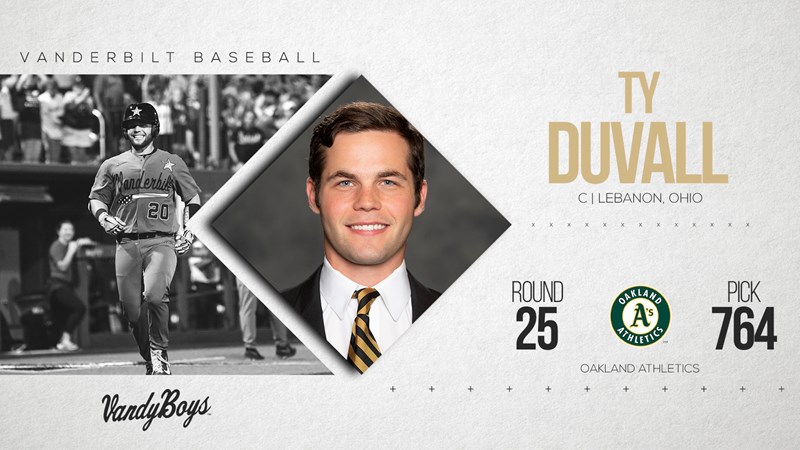 Catcher Ty Duvall caught the attention of the Oakland Athletics, being picked up in the 25th round (764) by the organization. The selection comes three days after the Lebanon, Ohio, native swatted a grand slam, helping the Commodores capture a 12-1 win against Indiana State in the NCAA Nashville Regional.

Duvall enters this weekend’s super regional having recorded a hit in 20 of his last 26 games. The junior contributed four RBIs against LSU at the SEC Tournament. The former three-year captain at Lebanon High School registered a combined five hits in the SEC Tournament. 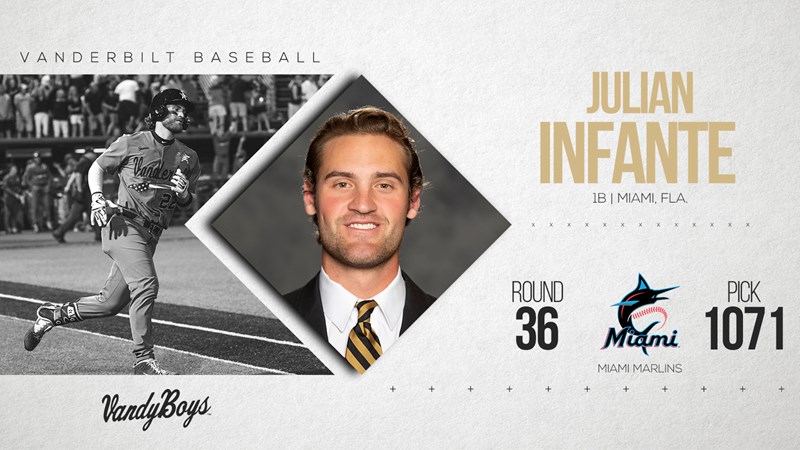 First baseman Julian Infante was picked up by his hometown team, being picked up in the 36th round (pick 1,071) by the Marlins. The Westminster Christian High School product was named NCAA Nashville Regional MVP after going 6-for-12 (.500) with three home runs and five RBIs.

Infante led the Commodores with 66 RBIs while hitting .315 and slugging 11 homers as a sophomore in 2017. The senior has totaled 30 career homers and posted a .343 on-base percentage. Infante has registered a hit in seven straight games and nine of the last 10.

VANDERBILT IN THE MLB DRAFT
Vanderbilt’s previous high mark of draftees was 12 set in 2011. The Commodores have seen eight-plus players selected in four of the last five drafts. A total of 166 Dores have been selected all-time. All six of Vandy’s 2019 draft-eligible pitchers were taken.