Vanderbilt quarterback looks back on maiden campaign through SEC

NASHVILLE, Tenn. — It will certainly go down as a memorable season for Ken Seals.

Vanderbilt’s starting quarterback has experienced more in 2020 than most of his peers likely will during their careers. The 6-foot-3, 218-pound native of Texas has started all eight games for the Commodores and turned into the most-prolific freshman passer in program history.

Seals arrived in Nashville in January, enrolled in classes and began to prepare for spring practice. Then the COVID-19 pandemic hit and everything changed.

For the next five months, Seals continued to train for his freshman season. At the end of fall practice he was named Vanderbilt’s starting quarterback for the opening game at Texas A&M on Sept. 26.

Seals, who will join his teammates at Vanderbilt Stadium at 3 p.m. CT Saturday against rival Tennessee, became the third true freshman to start at quarterback for the Commodores and the first to do so in a season opener. Over the course of eight games, Seals has had his ups and downs while totaling 1,689 passing yards and 10 touchdowns.

VUCommodores.com recently spoke to Seals about the past 11 months, how he has handled this season, playing during a pandemic and being a freshman quarterback in the SEC:

VUCommodores.com: This has been a wild year for you since arriving in Nashville in January. How have you handled it all?

Seals: “A lot of people have asked me how I’ve taken it and where my thoughts are. This is my first real experience with college football and college in general. It’s weird because this is all I’ve known. It’s weird not going to classes in person. It’s weird to think about playing in filled stadiums. Obviously those are the norms, but it’s not my experience.

“I think it has started to become normal for me, because we haven’t really known anything else. It’s what we’re expecting right now. It’s been a grind. But I have enjoyed it so far.” 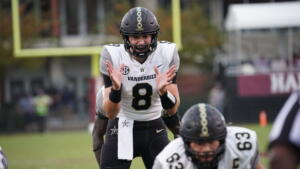 Of course you have had the academic side to handle as well. How has that gone this fall?

“I’m taking four classes right now. The four I’m in are some serious classes with a heavy workload. I’m probably more capable than I originally thought of handling things like being a quarterback in the SEC as a freshman, managing the time commitment for both football and academics and being able to balance it all. I’m pretty happy with how I’ve been able to handle the challenges that have come up so far. I think it has given me confidence in knowing if something unexpected happens like this again, I’ll be able to take it on.”

Any thought on where academics may take you?

“I know I want to be somewhere in the field of computer science or engineering. If I could somehow stay in football, maybe not as a coach, but as a reporter or an announcer or maybe an analyst or advisor or agent, that would be great.”

Todd Fitch has been your offensive coordinator from the beginning and is now your interim head coach. How have you seen your relationship with him grow?

“I really like everything Coach Fitch does. He’s a really good guy and really good coach. I think as far as him developing 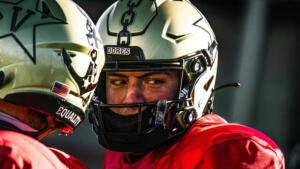 quarterbacks, I’ve never been around anyone who is better than him. He’s helped me through all of the challenges and struggles I’ve faced with this season with the new things and the mistakes I’ve made. He’s weathered the storm with some of my decision making and has really taught me a lot. I’m really appreciative and glad he’s here and he’s my coach.”

With the season coming to a close soon, what are your thoughts on how the Commodores can successfully move forward?

“There’s optimism around the program right now. People understand this season was hard – hard on the players, hard on the coaches and hard on the fan base. It’s hard on everybody. I think with the recent decisions and statements that have been made by our administration, it shows there’s an emphasis on athletic achievement. Decisions have been made that put football in an important and prominent role for the University. I think that alone brings a lot of optimism and hope.”