Run Continues for Sattelkau in Arizona

SCOTTSDALE, Ariz. — Vanderbilt sophomore Celina Sattelkau did enough through three rounds of stroke play to advance to the final round of the national championship scheduled to begin Monday at the Grayhawk Golf Club.

Sattelkau shot a 3-over-par round Sunday and finished 3-over-par through 54 holes in the NCAA Championships. The German native, tied for 23rd overall, was one of nine individuals not a member of one of the 15 teams to advance who advanced to earn a spot in Monday’s final round of stroke play.

With 84 players left in the tournament, Sattelkau is scheduled to tee off at 12:11 p.m. CT Monday.

Rachel Heck of Stanford is 10-under-par through 54 holes to lead the field which began with 132 participants. 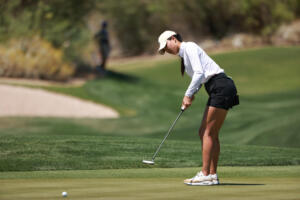 Sattlekau, with an early tee time Sunday, birdied her second hole, but then found four bogeys over the next 11 holes before a birdie on 14. Another bogey on 16 finalized the sophomore’s score on the par 72, 6,384-yard course.

Louise Yu, also competing as an individual this weekend, saw her national title run end after three rounds. The Vanderbilt senior finished 14-over-par after a 6-over-par round Sunday to come in tied for 97th overall.