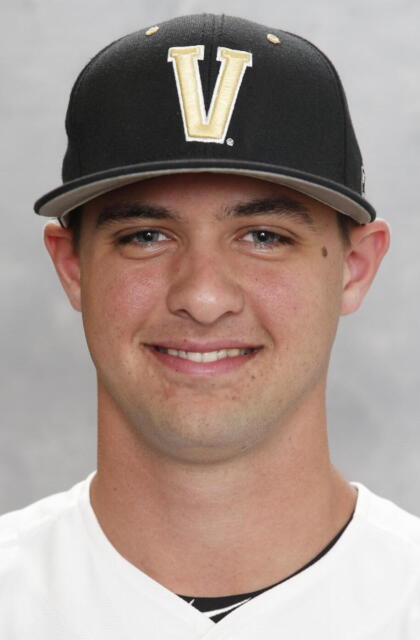 COACH CORBIN QUOTE: “Love the way he has developed his leadership skills and developed as a man. Tyler has a very good understanding of `team[apos] and the building of individual relationships. He is very respected by his teammates for his servant behavior, the effort he puts toward other players and his investment level into the game. He will have the opportunity to stay in this game for a while.”

2014 – Took the loss against Virginia 6/24 in CWS Finals allowing six runs on a career-high 10 hits with three walks and four strikeouts… Allowed four runs on three hits, three walks and three hit batters over 3.2 innings against UC Irvine in College World Series 6/16… Struggled with command in a no decision vs. Stanford in Super Regional allowing six runs on five hits with four walks and three hit batters over 4.2 innings… Selected 14th overall by San Francisco to become the 12th Commodore in history to be picked in the first round… Dominated Xavier 5/30 in NCAA Regional opener striking out a career-high 14 over eight scoreless innings, scattering four hits in his eighth win of the season… Struggled with control in SEC Tournament loss to Ole Miss 5/22 walking five over six-plus innings allowing four runs, three earned, on three hits with four strikeouts… Tossed a career-best 8.1 innings in his first no decision of the season against South Carolina 5/15 allowing three runs on six hits with four walks and six strikeouts… Battled through six innings at Florida 5/8 allowing one run on three hits with a season-high six walks to go along with six strikeouts in the loss… Won his second straight start, allowing three runs on seven hits over five-plus innings at Missouri 5/2 striking out seven… Tossed five scoreless innings to earn the win vs. Georgia 4/25 striking out seven and allowing two hits before power outage suspended game… Gave up a career-high 10 hits in loss at Arkansas 4/18 allowing six runs over seven innings with six strikeouts… Pinned with the loss allowing seven runs, four earned, on a season-high nine hits with four walks and four strikeouts against Texas A&M 4/11… Worked a career-best eight innings to earn the win at Tennessee 4/4 allowing four runs on five hits with six strikeouts, received six runs in support to equal his previous three starts combined… Struggled with command in loss to Kentucky 3/28 walking three and hitting three more while allowing three runs on five hits over five-plus innings… Roughed up in his second straight loss, giving up a career-high 11 runs, five earned, on six hits with five walks at Mississippi State 3/21… Took a tough loss vs. LSU 3/14 after leaving with one-run lead allowed two unearned runs on three hits with one walk and seven strikeouts in matching his career-best 7.1 innings… Pitched seven innings allowing one run on six hits with no walks and nine strikeouts in win over Winthrop 3/7… Won his third game of the season with seven strong innings against Stanford 2/28 allowing one run on three hits and three walks with six strikeouts… Set a new career-best with 11 strikeouts in win over UIC 2/21 allowing one run on one hit over six innings with one walk… Won his first game of the year in his first start with five innings of work at Long Beach State 2/14 allowing only one unearned run on one hit with one walk and seven strikeouts, retired the final 13 batters he faced.

2013 – A first team All-American according to the NCBWA, a second team All-American by Collegiate Baseball, ABCA, Perfect Game and Baseball America… Named a finalist for the Dick Howser Trophy and Golden SpikesAward… A second team All-American by Collegiate Baseball… Pinned with his first loss of the season in his shortest outing of the year allowing two runs on five hits over 2.2 innings with three walks in Super Regional loss to Louisville 6/9… Struggled with command in four-plus innings of no decision against Illinois 6/1 in NCAA Tournament allowing four runs, two earned, on two hits and five walks… Tagged as a second team All-SEC pitcher… Won his school record 14th game in 7.1 dominating innings vs. Texas A&M 5/24 at the SEC Tournament striking out eight scattering two hits and walking four while allowing no runs… Tagged for a season-high six runs on eight hits in his first no decision of the season in 3.2 innings against Alabama 5/17… Matched the school record with his 13th win of the year gutting through 5.1 innings at Kentucky 5/11 allowing two runs, one earned, on two hits and five walks… Earned his 12th straight win at South Carolina 5/4 clinching the SEC East with 6.1 innings allowing two runs on two hits with four walks and seven strikeouts taking a no hitter into the seventh… Matched David Price[apos]s school-best 11-0 start with his 11th win of the season, tossing six innings allowing two runs on seven hits with seven strikeouts against Mississippi State 4/27… Selected to represent the USA as a member of Team USA[apos]s Collegiate National Team… Moved to 10-0 on the season becoming just the ninth pitch in Vanderbilt history to reach at least 10 wins in a single season with his victory at Georgia 4/20 in the second game of a doubleheader allowing a season-high four runs on seven hits with seven strikeouts across seven innings… Struck out a career-best 10 in ninth straight win with seven innings against Missouri 4/13 allowing one run on three hits and no walks, first career start with no walks… Won his eighth straight allowing one run on four hits and five walks with six strikeouts at Ole Miss 4/6… Stayed perfect winning his seventh game in his seventh start with his longest outing of the season, tossing 7.1 innings and allowing two runs on four hits and five walks with nine strikeouts against Tennessee 3/30… Turned in his second straight scoreless outing with 6.1 innings against Florida 3/23 walking five, scat- tering two hits and fanning four, has not allowed a run in 13.2 innings… Named the TSWA Pitcher of the week for his performance at Auburn… Pitched 6.1 no-hit innings before a single broke up the bid but turned in 6.2 scoreless innings despite matching a career-high six walks in win at Auburn 3/16… Walked a career-high six batters but earned the win allow- ing one unearned run on two hits over 6.2 innings at Oregon 3/9… Won his third straight start with 6.2 innings against Illinois-Chicago 3/2 striking out eight and scattering five hits… Struck out a career-best nine batters over seven innings in win over Monmouth 2/23, fanned the first six batters of the game… Right-hander tossed five innings on a cold day at Hawkins Field to earn the win over Long Beach State 2/16, matching his career-high with five walks.

2012 – Named to All-Tournament Team at Raleigh Regional… Turned in 5.1 stellar innings of relief in Raleigh Regional final against NC State 6/4 matching a career-high with eight strikeouts and allowing four runs, three earned, on four hits… Took his fifth loss of the year giving up three runs on four hits and three walks over 3.1 innings in SEC Tournament Championship Game against Mississippi State 5/27… Touched for a run on one hit and one walk while recording two outs against Florida 5/24 in SEC Tournament… Pitched 3.2 innings in his fourth straight no decision giving up three runs on five hits and a career-high five walks at LSU 5/13… Lasted just 2.2 innings allowing two runs, one earned, on three hits and three walks at Tennessee 5/5… Pitched seven scoreless innings against Kentucky 4/28 to match a career-best also matching a career-high with eight strikeouts in a no decision… Gave up four runs on six hits over 6.1 innings in no decision at Alabama 4/21… Turned in his third straight quality start allowing three runs on nine hits over a career-long seven innings in taking the loss against Auburn 4/14… Walked a career-high three batters while turning in his second straight quality start allowing one run on two hits over six-plus innings of a no decision at Mississippi State 4/7… Pitched a career-high six innings to earn his first collegiate win against South Carolina 3/31 striking out seven and allowing one run on five hits… Turned in five solid innings allowing only one run on eight hits with a career-best eight strikeouts in no decision against Georgia 3/24… Tagged for three home runs in his second start, third loss, at Florida 3/18 allowing five runs on five hits over a career-best five innings matching a career mark with six strikeouts… Worked three innings of relief allowing one run on four hits and two inherited runners to score against San Diego 3/11… Pinned with his second loss after allowing four runs, three earned on five hits, including a grand slam, over a career-long 4.2 innings at Belmont 3/6 with a career-high six strikeouts… Pitched 1.2 innings against Rhode Island 3/4 allowing three runs, two earned, on four hits with two strikeouts… Made his collegiate debut with a start at Stanford 2/18 taking the loss, allowing nine runs, five earned, on nine hits over 4.1 innings.

ACADEMICS – Beede is undecided on a major in his first year at Vanderbilt.

PERSONAL – Tyler Joseph Beede (BEE-dee)… Born 5/23/93… Son of Walter Beede and Cheryl Rivers… Has an older brother, Kyle… Nickname is Young Beedah… Favorites include teammate Jared Miller (baseball player), Boston Red Sox (baseball team) and football (other sport)… Rapping is his second-best talent, he has produced eight songs… Says teammate Adam Ravenelle would play him in a movie about his life… One word that describes him is hard-working… Roommates with Zander Wiel, Sam Wild and Mike Portu… Chose Vanderbilt because of the great academics, baseball program, coaching staff and the winning tradition.