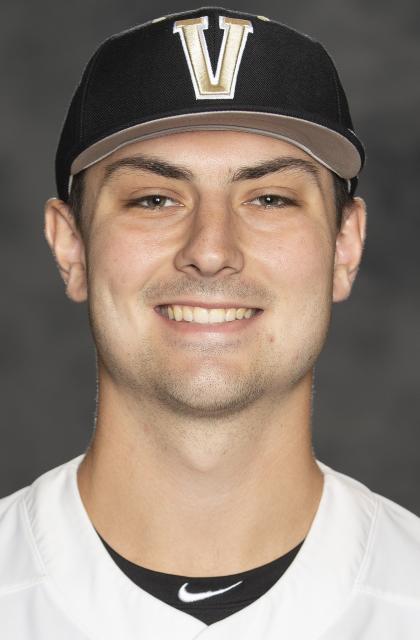 Coach Corbin Quote: Patrick continues to be one of our strongest leaders and most connected players in our program. To have his ability and experience back for a senior year is special. Plain and simple, he is a tough competitor that we trust. He is the winningest pitcher in our program and has been a part of winning environments everywhere that he has played. He is a pleasure to be around and coach. We will continue to rely on him heavily as he positively impacts our program and pitching staff.

2018 – Concluded his junior season ranking ninth in team history for career ERA (2.95) and 11th in career wins (22)… Started 12 games and made 16 appearances, posting a 5-5 record and 3.57 ERA… Recorded his 200th career strikeout in his hometown of Knoxville on May 12 at Tennessee… Fanned a season-high eight batters without allowing an earned run in five innings of three-hit ball against TCU on March 11… Did not allow an earned run for the third time in four outings, tossing five shutout frames at Mississippi State on March 17… Permitted just three hits in two-straight starts coming on April 15 against Ole Miss and April 20 at Missouri… Allowed three runs or fewer in 15 of 16 appearances… Did not allow a hit in 1.2 innings against Clemson to secure his fifth win on June 2… Struck out four-or-more batters on eight occasions… Held Tennessee to two runs while fanning four on May 12… Held opponents to a .230 batting average (29-for-126) with runners on base.

2017 – Turned in his 12th quality start of the season with seven innings to earn win vs. St. John’s 6/2 at Clemson Regional allowing three runs on six hits, moved into a tie for eighth on VU single-season wins list with his 10th victory of season… Won his ninth game of the season and fourth in five starts with seven scoreless innings against Alabama 5/18… Received just his second no decision of the season at Arkansas 5/12 after allowing three runs on seven hits, including two home runs, with seven strikeouts over 6.2 innings… Won his team-best eighth game of the year with 6.2 innings against Missouri 5/5 allowing two runs on eight hits with six strikeouts, three straight wins… Dominated again in victory vs. Tennessee with eight scoreless innings allowing five hits and striking out five in team-leading seventh win… Earned his team-best sixth win of the year with his first career complete game at Georgia 4/21 allowing one run on eight hits with one walk and four strikeouts… Took his first no decision of the season in his shortest outing of the year against Florida 4/13, giving up three runs on seven hits over 4.1 innings… Turned in seven strong innings to earn win at South Carolina 4/6 striking out six and allowing two runs on eight hits… Made his first career Friday night start in SEC play at Kentucky 3/31 allowing a career-high seven runs, six earned, on nine hits over five innings in a loss… Dominated over seven scoreless innings of win over Texas A&M 3/25 scattering three hits and punching out six… Earned his third win of the year with six-plus solid innings at Ole Miss 3/18 allowing two runs on four hits with a walk and three strikeouts… Matched a career-best with 11 strikeouts over a new career-best 8.2 innings in tough-luck loss to Saint Mary’s 3/12 allowing five runs, three earned, on six hits… Pinned with his first loss of the season despite a quality start against CSUN 3/4, allowing three runs, one earned, on four hits with seven strikeouts over six innings… Earned his second win of the year with a quality start against UIC 2/25, striking out six and allowing one unearned run on three hits… Tossed five scoreless innings in his season debut at San Diego 2/17, allowing only one hit with three walks and four strikeouts.

2016 – Named a Freshman All-American by Collegiate Baseball… Opened the SEC Tournament with six scoreless innings against Missouri 5/24 to earn his seventh win, struck out four and allowed only two hits… Recorded his second save of the season with three scoreless innings in win over Auburn G1 5/19… Roughed up in his fifth SEC start at Florida 5/15 giving up a career-high six runs on six hits over 2.1 innings… Took his first career loss at Texas A&M 5/7 allowing two runs on four hits over 4.2 innings… Won his sixth game of the year with six-plus innings against Georgia 5/1, punched out six and allowed two runs on three hits and a walk… Pitched five innings at Tennessee 4/24 allowing two runs on two hits with five strikeouts in no decision… Started his first career SEC game vs. Kentucky 4/17, pitching four scoreless innings and allowing just two hits with five strikeouts in a no decision… Picked up his fifth win of the year and first out of the bullpen at LSU 4/9 working two scoreless innings… Earned his fourth win of the season in his first start since March 15, turning in three scoreless vs. Lipscomb 4/5 with five strikeouts… Tossed four scoreless innings in relief vs. Belmont 3/29 scattering three hits and fanning three… Recorded the final seven outs to earn his first career save vs. Mississippi State 3/20, striking out three in a perfect outing… Won his third straight start with two scoreless innings vs. NIU 3/15 striking out two and allowing two hits… Picked up his second win in his second start allowing three runs on four hits with no walks and seven strikeouts vs. Radford 3/8… Earned the win in his first career start with a stellar seven innings against EIU 2/24, carrying a no hitter into the seventh inning before allowing an infield single, struck out 11 over seven scoreless… Made his collegiate debut out of the bullpen against San Diego 2/19 allowing two runs on three hits with three walks and three strikeouts over 2.1 innings…SUMMER BALL – Started four games for Bourne in the Cape Cod League, going 1-2 with a 3.72 ERA with 15 strikeouts over 19.1 innings.

Academics – Raby is majoring in human and organizational development.

Personal – Steven Patrick Raby… Born 5/22/97 in Louisville, Ky…. Son of Steve and Patricia Raby… Has one brother, Brian, and one sister, Angela Brown… Nickname is Spock or Rabes… Favorites include: Chipper Jones (player), Atlanta Braves (team), all the Fast & Furious movies (movies), Dexter, Friends (TV shows), Brad Pitt (actor), chicken and mac & cheese (meal), Florida Georgia Line, Luke Bryan, J. Cole, Drake (musicians), peanut butter sandwich (late night snack)… Says he would be a coach if not an athlete… Names Nicholas Cage as the actor to play him in a movie… Uses goofy as the one word to describe himself… Roommates with AJ Franklin… Lists winning a state title as a junior as his most memorable athletic moment… Chose Vanderbilt for “the academics, baseball team, championships and Coach Corbin.”