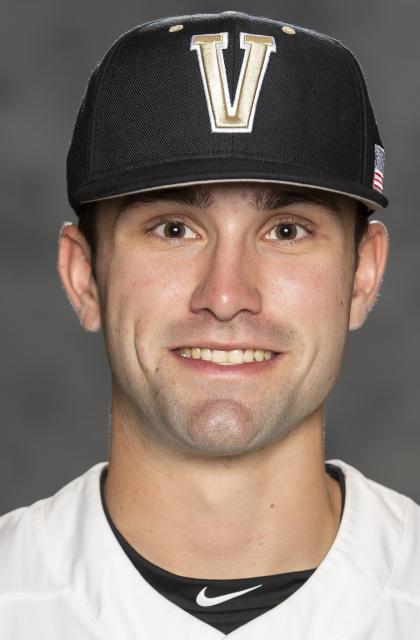 Coach Corbin Quote: Jackson was our go-to guy out of the bullpen as the season progressed. He is a strong lefty that has the ability to command his fastball as well as throw a good breaking ball. He was able to create a lot of swing-and-miss during the postseason. Jackson’s maturity has been realized in the classroom and on the field. He will be relied upon heavily on our pitching staff. Jackson has developed into a strong older player and has shown leadership abilities with the younger players in our program.

2018 – Posted a 4-1 record and 4.81 ERA across 20 appearances including one start… Struck out 39 batters while tossing 28.2 innings and walking nine… Became the first Commodore during the Tim Corbin era (2003-present) to record a win and save on the same day, coming in doubleheader action against Ole Miss on April 15… Tossed multiple innings in eight of his 20 appearances including three scoreless frames against Mississippi State on June 9 at the Nashville Super Regional… Secured the win on Opening Day while limiting Duke to one hit over a season-high 3.2 innings… Struck out multiple batters 13 times including over his first eight appearances… Fanned a season-high five batters in 3.1 innings against UMass-Lowell on Feb. 24… Held South Carolina to two hits while fanning four on April 28… Did not permit a walk in 10 of his final 13 appearances while permitting just four free passes over his final 17.1 innings … Limited opponents to three extra-base hits over his final six appearances… Secured his fourth victory on May 19 against Kentucky, holding the Wildcats scoreless in 1.2 frames.

2017 – Inherited and left the bases loaded at Clemson 6/5 turning in 1.2 scoreless innings at Clemson Regional… Stranded two inherited runners and worked 1.1 innings of relief against Alabama 5/20… Inherited the bases loaded and stranded them loaded, recording two outs against Middle Tennessee 5/16… Punched out the only two batters he faced in loss Arkansas 5/14… Worked a perfect inning of relief at Louisville 5/9… Turned in his longest outing of the year with two innings of work against Austin Peay 5/2 allowing a run on two hits… Gave up two runs on two hits in 1.1 innings of relief against Florida 4/15… Allowed all three inherited runners to score against Florida 4/11, recording two outs… Struck out two in a perfect inning of relief against Tennessee Tech 4/11… Worked a scoreless inning of relief against UT Martin 4/4… Struggled with command, walking four and giving up three runs on one hit while recording two outs against Texas A&M 3/25… Gave up three inherited runners and two of his own without getting an out against Belmont 3/22… Struck out two with one walk and one hit in lone inning of relief against Central Arkansas 3/8… Walked the lone batter he faced against CSUN 3/4… Impressed in his collegiate debut against Evansville 2/22, striking out the side in 14 pitches.

High School – The top prospect in the state of Massachusetts according to Perfect Game… Lettered four years in baseball and one in football at Wilmington HS… Captained the baseball team as a senior… Played summer and/or high school ball with Ryan January (Arizona Diamondbacks), Rich Gilbride (Siena), Morgan McSweeney (Wake Forest).

Academics – Gillis is undecided on a major.

Personal – Jackson Kennedy Gillis… Born 11/27/97 in Stoneham, Mass…. Son of Joe and Andrea Gillis… Has two siblings, Carlyn and Delaney… Favorites include: David Ortiz (player), Boston Red Sox (team), the Harry Potter series (movies), The Walking Dead (TV show), Will Ferrell (actor), steak (meal), G-Eazy (musician), peanut butter and grape jelly uncrustable (late night snack)… Says Ben Affleck would play him in a movie… Lists card tricks as his oddest talent… Uses funny as the one word to describe himself… Roommates with Michael Sandborn… Starting his first high school game as a freshman is his most memorable athletic moment… Chose Vanderbilt because it is “one of the most prestigious universities in the country.”