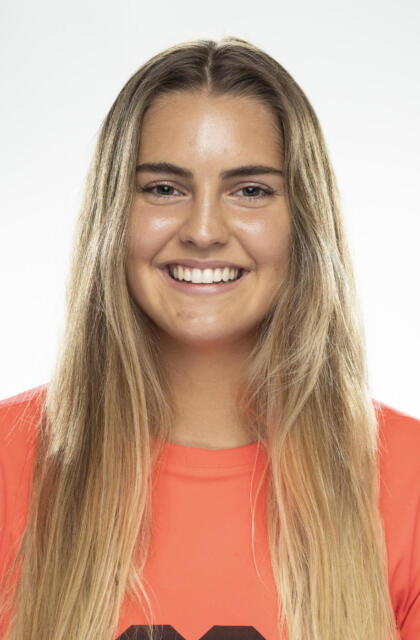 Football
As a Senior (2020)
• Played in two games, versus Missouri and Tennessee
• First woman to participate in a Power 5 football contest, at Missouri, and first to score a point, against Tennessee
• SEC Co-Special Teams Player of the Week (Nov. 30)
• Handled opening kickoff of the second half against the Tigers
• Two-for-two on extra points against the Vols

Soccer
As a Senior (2020)
• Started nine of Vanderbilt’s 12 games during the fall 2020 season, posting three clean sheets on the way to a 7-2-0 record in net
• 0.97 goals against average, the eighth-best mark in a season in Vanderbilt soccer history
• Started all four games during 2020 SEC Tournament championship run
• Posted a shutout in the second round against Mississippi State (Nov. 15) and had an assist in the quarterfinals against No. 13 Tennessee (Nov. 17)
• First career start against South Carolina (Oct. 11) and tallied six saves
• First collegiate win in the 2-1 double-overtime victory at Florida (Oct. 18)
• Kept a clean sheet in Vanderbilt’s 1-0 victory over No. 15 Georgia (Oct. 25)
• Earned a second consecutive clean sheet in the 2-0 victory at LSU (Oct. 30)
• Had a shutout streak of 314:34 during the regular season stretching from Oct. 18 at Florida to Nov. 7 against Ole Miss

As a Junior (2019)
• Played in one game, against Chattanooga (Sept. 12)
• Combined for a shutout versus Chattanooga

The Fuller File:
• Major is Medicine, Health and Society
• Began playing soccer at the age of five
• Played goalkeeper for Hugh Bradford at D’Feeters ECNL