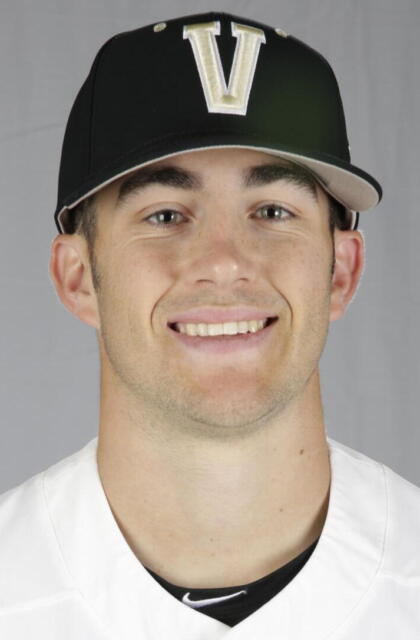 Coach Corbin Quote: Connor was fortunate to play a lot of shortstop for us as a freshman which enabled him to grow very fast in our program. He is a very mature, skilled defensive player that will continue to grow with competition. He has been very assertive in the strength, conditioning and offensive area of his game. He will be able to impact the game on both sides of the ball because of this.

2017 – Scored a run and drove in another going 1-for-4 in win at Clemson 6/5 at Clemson Regional… Went 0-for-3 in loss to Clemson 6/4 at Clemson Regional… Singled and scored in win vs. Clemson 6/3 at Clemson Regional… Scored two runs and singled twice in win over St. John’s at Clemson Regional… Hit his first carer home run to tie the game in the seventh inning and walked twice with scored two runs in SEC Tournament loss to South Carolina 5/23… Struck out three times in tie against Alabama 5/20… Scored a career-high three runs and walked twice in victory vs. Alabama 5/19… Knocked in two runs for the second straight game despite going 0-for-4 in win vs. Alabama 5/18… Drove in two runs with a two-hit game in win over Middle Tennessee 5/16… Walked and went hitless in loss at Arkansas 5/14… Went 0-for-4 in win at Arkansas 5/13… Notched his first triple of the season in loss at Arkansas 5/12… Drove in a run for the second straight game in loss at Louisville 5/9 going 1-for-2… Scored twice and drove in a run in win against Missouri 5/7… Struck out twice and went 0-for-4 in loss to Missouri 5/6… Stole a base and scored a run in victory vs. Missouri 5/5… Scored a run and knocked in a run despite going 0-for-3 in win over Austin Peay 5/2… Went 0-for-3 in loss to Tennessee 4/29… Doubled in win vs. Tennessee 4/28, hits in four of his last five… Drove in two runs two match a career-best in win at Georgia 4/22 in second game of doubleheader going 2-for-5… Singled as one of team’s two hits in loss at Georgia 4/22… Scored a run in win at Georgia 4/21… Doubled and scored twice in win at Middle Tennessee 4/18… Slipped into 2-for-24 slump with 0-for-4 against Florida 4/15… Knocked in a run for the second straight game in win vs. Florida 4/14 with a suicide squeeze bunt… Drove in a season-best two runs in loss to Florida 4/13 despite going 0-for-3… Went 0-for-3 in loss at South Carolina 4/8… Singled in win at South Carolina 4/7, hits in eight of last nine games… Seven-game hitting streak snapped at South Carolina 4/6 going 0-for-4… Extended hitting streak to seven games with a double in eighth inning of win over UT Martin 4/4… Matched his career-best with three singles in win at Kentucky 4/2… Extended hitting streak to five games with single at Kentucky 4/1… Singled for the fourth straight game in loss at Kentucky 3/31… Scored and singled in win over Lipscomb 3/28… Singled twice and drove in a run in loss to Texas A&M 3/26… Came off the bench to play third base against Texas A&M 3/25, adding a single… Scored a run and went 0-for-3 in loss at Ole Miss 3/19… Matched a career-high with three strikeouts in win at Ole Miss 3/18… Singled in loss at Ole Miss 3/17… Walked and scored in win against Western Kentucky 3/14… Scored twice and went 1-for-3 with his first RBI since 2/19 in win over Saint Mary’s 3/12… Went 0-for-3 in loss to Saint Mary’s 3/12… Went 0-for-1 in win over Saint Mary’s 3/10… Stole a base for the second straight game in win over Central Arkansas 3/8 going 2-for-3… Went 0-for-2 in win over Central Arkansas 3/7… Scored a run and went 1-for-4 with a walk against CSUN 3/5… Singled twice in loss to CSUN 3/4… Walked and went 0-for-3 against CSUN 3/3… Went 0-for-3 against SE Louisiana 3/1… Singled and scored in win over SE Louisiana 2/28… Went 0-for-3 in loss to UIC 2/26… Scored two runs in win over UIC 2/25… Went 0-for-4 with a career-high three strikeouts against UIC 2/24… Scored two runs and went 1-for-3 with two walks in win over Evansville 2/22… Singled twice at San Diego 2/19, driving in a run and scoring another in win… Knocked in a run and went 0-for-5 at San Diego 2/17… Started at shortstop on Opening Day, going 1-for-4 at San Diego 2/16.

2016 – Made his third error in three games and just fifth of the season in NCAA Regional loss to Washington 6/4… Went 0-for-4 in NCAA Regional loss to Xavier 6/4… Singled and made a career-high two errors in loss to Texas A&M 5/27 at SEC Tournament… Scored two runs and walked a career-high three times in loss to Ole Miss 5/26… Singled twice and drove in two runs in win over Texas A&M 5/25 at SEC Tournament… Singled in SEC Tournament opening win over Missouri 5/24… Singled to drive in a run in win over Auburn 5/21, RBI in six of last seven games (7)… Drove in a run for the fifth straight game going 2-for-4 in win over Auburn G1 5/19… Knocked in a run for the fourth straight game going 1-for-3 in win over Morehead State 5/17… Drove in two runs in loss at Florida 5/15, marking the third straight game with at least one RBI… Knocked in a run for the second straight game in win at Florida 5/14 going 2-for-4 with a double… Doubled in the go-ahead run at Florida 5/13 going 1-for-2 in loss… Two-out single drove in a run in win at Texas A&M 5/6… Singled in win vs. Western Kentucky 5/3, hits in four of last five games… Singled twice in win against Georgia 5/1, scoring a run and driving in another… Knocked in two runs with his first career triple to help beat Georgia 4/30 scoring two runs and stealing his first career base… Doubled in two runs in win over Austin Peay 4/26 going 1-for-3 with a walk… Walked twice in loss at Tennessee 4/23… Doubled and scored in win at Tennessee 4/22, first career extra-base hit… Bunted for a single and scored in win vs. Kentucky 4/16… Started his third straight game in win over Kentucky 4/15 going 2-for-2 with RBI-single… Singled twice and scored two runs in win over Middle Tennessee 4/12… Came off the bench to drive in a run and score a run in loss at LSU 4/7… Singled in win over UIC 2/28… Came off the bench to make a defensive gem and save a run at SS in win vs. UIC 2/27… Posted a career-high three hits in win over UIC 2/26, scoring two runs… Came off the bench to score a run in win over EIU 2/24… Dropped down a bunt single for his first career hit and scored a run in win over San Diego 2/21… Earned the nod as the starting SS on opening day, drawing two walks, scoring twice and driving in a run in win over San Diego 2/19… SUMMER BALL   Named Defensive Player of the Year in the New England Collegiate Baseball League and hit .218 with two home runs and 12 RBI in 35 games for Newport.

High School – Named a Perfect Game All-American in 2015… A two-sport standout in baseball and basketball at Blue Valley West HS in Overland Park, Kan. lettering three times in each sport… Helped lead baseball team to state title in 2013 and basketball team to state runner-up in 2013… Followed up with third place finishes in baseball and hoops at state tournament in 2015… Earned a Rawlings Gold Glove Award in 2013 when he did not make an error in 90 chances for state champs… Named All-State and All-League on the diamond in 2015… An All-League performer in basketball in 2013 and 2015, picking up All-Tournament Team honors at the state tournament in 2015… Played summer/high school ball with former Vanderbilt commit and Texas 2012 first round pick Collin Wiles, Luke Ritter (Wichita State), Bobby Wernes- (Houston Astros), Zack Engelken (Nebraska), Ryan Ralston and Tanner Gragg (Kansas), Blaise Gammon (Kansas State Basketball), Nathan Reeder and Brandon Gomer (Evansville)

Academics – Kaiser is majoring in human and organizational development.

Personal – Connor William Kaiser… Born 11/20/96 in Shawnee Mission, Kan…. Son of Stan and Jana Kaiser… Has two brothers, Kyle and Brett… Dad played baseball at Fort Hays State, brother Kyle played baseball at Johnson Community College and Neosho Community College… Favorites include: Derek Jeter (player), Kansas City Royals (team), Step Brothers (movie), The Bloodlines (TV show), Will Ferrell (actor), Eric Church (musician), chocolate milk or peanut butter (late night snack)… If he was not an athlete he would still be involved in the game somehow… Names Bradley Cooper as the actor that would play him in a movie… Uses outgoing as the one word to describe himself… Roommates with Ethan Paul and Matthew McGarry… Lists winning the baseball state championship in 2013 as his favorite athletic memory… Chose Vanderbilt because of “the coaching staff, the University, baseball and my teammates.”