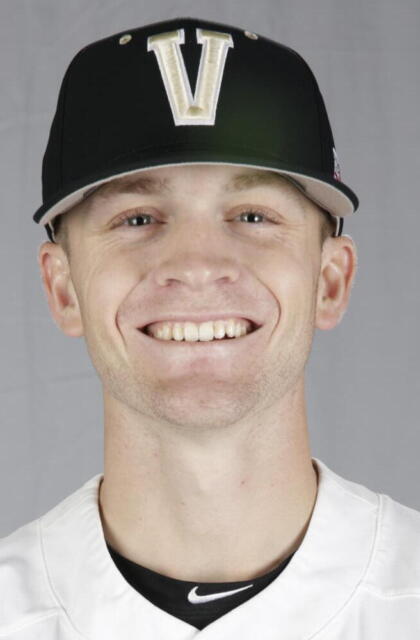 Coach Corbin Quote: Chandler has matured in every facet of his Vanderbilt life. He has taken it upon himself to be very intentional with his daily investment habits. Because of this, he has taken his physical strength to another level, his pitching development has grown and his mental skills on the field and in the classroom have blossomed. He will add on to the experience he received as a freshman and really help our club this year in a key role.

2017 – Tagged with his second loss of the year at Arkansas 5/14 allowing four runs, three earned, on five hits over four-plus innings… Walked four over 2.1 innings against Missouri 5/7 in his 11th start of the season giving up two runs on one hit… Started and turned in two scoreless innings as part of staff day victory over Austin Peay 5/2 earning his seventh win… Earned his team-best sixth win of the year in his first career SEC start in second game of doubleheader at Georgia 4/22 allowing three runs on six hits over 5.1 innings… Turned in two scoreless innings at Middle Tennessee 4/18 as part of a staff day, punched out one and allowed one hit in no decision… Pinned with his first loss of the season against Tennessee Tech 4/11 despite striking out nine over 4.1 innings, allowed four runs on seven hits, 26 strikeouts over last three starts (19.1IP)… Dominated for the second straight week to earn his fifth win of the year, striking out a career-best 10 over six scoreless innings against UT Martin 4/4… Fell one out shy of a no-hitter against Lipscomb 3/28, holding the Bisons hitless for 8.2 innings before wrapping up a one-hitter and first career shutout with five walks and seven strikeouts… Earned the win over Belmont 3/22 after allowing four runs on three walks and six hits over four innings… Won his second straight start with a career-best 5.1 solid innings against Western Kentucky 3/14 allowing one run on six hits with no walks and four punch outs… Struck out a career-best eight over five innings in first win of season against Central Arkansas 3/8 allowing one run on five hits… Gave up just a pair of solo home runs over three innings against SE Louisiana 3/1 in his first start of the season, striking out five and giving up just two hits… Struggled with command in season debut, walking two and hitting two more allowing two runs and getting no outs at San Diego 2/17.

2016 – Made three starts and pitched in 10 total games as a true freshman going 2-1 with a 4.26 ERA… Struck out two against Ole Miss 5/26 at SEC Tournament allowing one unearned run in one inning… Worked a scoreless inning of relief in win over Auburn 5/19 G2… Allowed three runs, two earned, on four hits over two innings of relief vs. Georgia 4/29, striking out three… Gave up two runs on three hits over 1.1 innings of relief vs. Central Arkansas 4/19… Turned in five solid innings of relief at LSU 4/7 allowing four runs, two earned, on a career-high eight hits… Gave up a run on two hits in one inning vs. Belmont 3/29… Took his first career loss at Middle Tennessee 3/22 allowing six runs, three earned, on five hits while matching his career-high with six strikeouts… Turned in two scoreless innings vs. NIU 3/15 in his first relief outing, striking out one… Tossed five scoreless innings with six strikeouts to beat Radford 3/9, scattering three hits to combine with Joey Abraham on the shutout… Earned the win in his collegiate debut allowing two runs on three hits with six strikeouts over four innings of rain-shortened victory over UT Martin 2/23… SUMMER BALL   Made three starts in his 11 games for Orleans in the Cape Cod League going 0-1 with a 3.91 ERA, striking out 21 in 23 innings.

High School – Named an All-American by Perfect Game in 2015… Lettered three years on the baseball team at Watkins Memorial HS in Granville, Ohio… Team won 2015 District title… Drafted in 30th round by Cleveland in 2015.

Academics – Day is majoring in communications.

Personal – Chandler Weber Day… Born 5/24/97 in Westerville, Ohio… Son of Tim and Robin Day… Has three brothers: Taylor, Kyle and Conley… Nickname is Chan… Favorites include: Justin Verlander (player), For the Love of the Game, Wolf of Wall Street (movies), Narcos, Sherlock Holmes (TV shows), Leonardo DiCaprio (actor), chicken alfredo (meal), Alan Jackson, George Strait (musicians), brown sugar oatmeal (late night snack)… Says he would be a comedian if not an athlete… Names Kevin Costner as the actor to play him in a movie… Lists the one-handed clap as his oddest talent… Uses confident as the one word to describe himself… Roommates with Alonzo Jones… His most memorable athletic moment is throwing a perfect game with 15 strikeouts… Chose Vanderbilt because it’s “the best university for an education and I am able to play for the best baseball team in the country.”