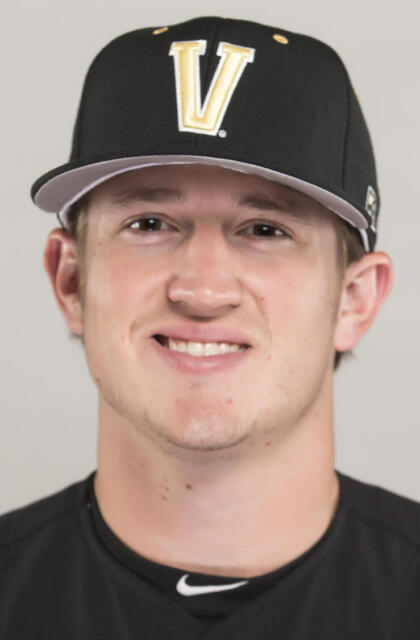 COACH CORBIN QUOTE: “Carson is a very rare combination of power arm, skill, athleticism, mentality and competitiveness. He is in a category by himself when it comes to all of these traits. He put together quite a year when he went from a big-game closer to a big-game starter midway through the season. He thrives in the arena of competition. Loves the team aspect and everything that it stands for.”

2015 – Named as one of four finalists for the Golden Spikes Award alongside teammate Dansby Swanson, duo becomes fourth set of teammates to be named finalists in same year and second in VU history joining David Price and Pedro Alvarez in 2007… Named to Nashville NCAA Regional all-tournament team… Punched out 11 in NCAA Tournament win over Lipscomb 5/29 allowing one run over seven innings, seventh game of season with at least 11 strikeouts… Roughed up for a career-high six runs in SEC Tournament loss to Texas A&M 5/21 allowing six hits with four strikeouts over five innings… Named SEC Pitcher of the Year, first team All-SEC and Defensive All-SEC, joins David Price (2007) and Grayson Garvin (2011) as the only Commodores to earn SEC Pitcher of the Year honors… Becomes just the fourth pitcher in SEC history and first since Tennessee’s Luke Hochevar in 2005 to win the pitching triple crown, leading the league in wins, ERA and strikeouts… Matched his career-best with 14 strikeouts in his 11th win of the season and eighth straight allowing one runs on two hits at Alabama 5/14, not allowing a hit after the first inning… Named co-SEC Pitcher of the Week for his second shutout of the season, striking out 11 vs. Florida in his 10th win of the year… Recorded his second shutout of the season with nine scoreless innings against Florida 5/7 to win his team-best 10th game of the season striking out 11 and scattering six hits, fifth game of the season with 10-plus strikeouts… Pushed into top 10 all time at Vanderbilt with 264 career strikeouts for ninth all time, his 118 strikeouts are the most by a VU pitcher since Sonny Gray’s 132 in 2011… Won his sixth straight start with 6.2 innings at Kentucky 5/1 allowing three runs on eight hits with six strikeouts, scoreless streak snapped at 24 innings in second inning home run… Tagged as the TSWA Pitcher of the Week after his 11-strikeout, seven scoreless effort in win vs. Missouri… Turned in his third straight scoreless outing with seven shutout innings vs. Missouri 4/24 to earn his team-best eighth win of the year fanning 11 and scattering three hits and four walks, has not allowed a run over last 23 innings with 34 strikeouts… Tossed seven more scoreless innings in win at South Carolina 4/16 striking out nine with one walk and three hits allowed, in his last two starts he’s allowed five hits and one walk with 23 strikeouts over 16 scoreless innings… Earned his third National Player of the Week honor this season for his two-hit shutout with 14 strikeouts vs. Ole Miss… Struck out a career-best 14 in his second career shutout in win over Ole Miss 4/9 scattering two hits and issuing no walks, first VU pitcher to have at least 14 strikeouts with no walks in a complete game since Sonny Gray vs. Brown in 2011, his second career shutout matches David Price’s career total… Picked up his fifth win of the season at Georgia 4/3 despite allowing a career-high nine hits over six innings with five runs and seven strikeouts… Earned his second National Pitcher of the Week honor from Collegiate Baseball and TSWA Pitcher of the Week honors for his performance against Tennessee… Dominated over eight scoreless innings to beat Tennessee 3/27 striking out a career-high 12 and scattering five hits… Beat up for a career-high six runs, one earned, over 5.2 innings in his first loss of the season at Auburn 3/20 striking out eight and walking three… Tagged for a then career-high five runs on five hits over six innings in a no decision vs. Arkansas 3/14 with seven strikeouts in game one of DH… Dominated over 6.1 scoreless innings to win at UCLA 3/6, striking out nine and scattering three hits and five walks… Named as a National Player of the Week by Collegiate Baseball for his performance against Illinois State… Punched out a career-best 11 over six scoreless innings to earn win over Illinois State 2/27, including eight of first nine batters, allowed just two hits… Struck out six over five innings of a no decision vs. Indiana State in Port Charlotte, Fla. allowing two runs on four hits… Combined with Philip Pfeifer to toss the first opening day shutout since 2010 pitching five innings and scattering two hits with three walks and seven strikeouts.

2014 – Turned in a gutsy performance in national championship game on three days rest allowing two runs, one earned, on three hits with five strikeouts over 5.1 innings in no decision against Virginia 6/25… Matched a career-high with six walks in a no decision vs. Texas 6/21 allowing two runs on four hits over 4.1 innings as VU advanced to CWS Finals… Earned the win in College World Series opener vs. Louisville 6/14 allowing two runs on six hits with six strikeouts over 5.1 innings… Punched out a career-best nine over 6.1 innings of a no decision vs. Stanford 6/7 in Super Regional loss allowing a career-high four runs… Worked eight strong innings to earn the win over Oregon 5/30 in NCAA Regional allowing two runs on three hits with five strikeouts to pick up his sixth win in six starts… Tabbed a second team All-SEC pitcher and All-Defensive team by the league’s coaches… Saved his team-best 10th game of the season in win vs. Tennessee 5/20 in SEC Tournament opener… Improved to a perfect 5-0 as a starter with 5.2 innings of work against South Carolina 5/16 allowing three runs on seven hits with a career-high six walks and four strikeouts, scoreless streak snapped at 29.2 innings… Dominated in his first career shutout, blanking Florida 5/9 scattering four hits, walking two and striking out eight to match a career-best, extended his scoreless streak as a starter to all 28 innings, became first Commodore since Kevin Ziomek 3/1/13 to throw a complete game shutout… Earned his third straight win in his third start with six scoreless innings at Missouri 5/3 allowing four hits with three walks and three strikeouts, as a starter he has 19.0 scoreless innings… Picked up his second win in as many starts with seven scoreless innings vs. Georgia 4/26 striking out a career-best eight over a career-long seven innings and allowing two hits and three walks… Earned the win in his first career start working six scoreless innings at Arkansas 4/19, striking out six and scattering six hits… Allowed two runs, one earned, on one hit and two walks with a career-high six strikeouts over three innings in loss to Texas A&M 4/13… Took his first loss of the season allowing two runs on one hit and two walks while recording two outs at Tennessee 4/5… Closed out his ninth save of the season with a perfect ninth at Tennessee 4/4… Entered a one-run game vs. Kentucky 3/30 and struck out home run leader A.J. Reed with two runners on then finished off his eighth save of the season… Turned in two scoreless innings in win over Kentucky 3/29… Gave up one run on one hit and one walk with four strikeouts over three innings at Mississippi State 3/23 to pick up his seventh save… Notched his sixth save with a spotless ninth inning vs. LSU 3/15 G1… Allowed two inherited runners to score in loss to LSU 3/14 tossing 1.1 innings… Matched a career-high with five strikeouts over two scoreless innings vs. Winthrop to notch his team-best fifth save… Recorded his fourth save of the season with three innings of scoreless work at MTSU 3/5 striking out four and allowing one hit… Allowed two inherited runners to score and walked three batters while recording two outs in relief vs. Stanford 3/2… Picked up his third save of the season with two scoreless innings against Stanford 2/28 striking out three… Hit two batters and allowed two runs in one inning vs. Evansville 2/26… Notched his second save in his second appearance of the season combining with Jared Miller for their second combined shutout of the season with two innings of work against UIC 2/22 striking out five… Earned his first save of the season in his 2014 debut working three scoreless innings with five strikeouts to match a career-best at Long Beach State 2/15.

2013 – Proved to be one of the Commodores’ most valuable pitchers late in the year pitching in 26 games – second-most on the team – total in his freshman season… Named a Freshman All-American by Collegiate Baseball… Tossed 5.1 scoreless innings vs. Louisville 6/9 in Super Regional loss, the longest outing of his career, scattering two hits and striking out three… Dominated over a career-best five scoreless innings of relief to earn the win vs. Illinois 6/1 in NCAA Tournament, striking out four and scattering three hits…Named as one of three VU freshman to the SEC All-Freshman squad… Earned his second win of the year with a career-best 4.1 innings against South Carolina 5/23 in SEC Tournament allowing one run on three hits with a career-high five strikeouts… Allowed two runs on a career- high four hits over three innings in loss to Alabama 5/17… Worked a career-best 3.1 innings allowing one run on two hits with four strikeouts at Kentucky 5/11 G2… Pitched a perfect inning in win vs. Presbyterian 5/8… Worked a career-best 2.2 scoreless innings to earn his fourth save of the season at South Carolina 5/4… Notched his third save of the season against Mississippi State 4/27, recording the final five outs and striking out two… Dominated in his lone inning at Louisville 4/23, striking out two batters… Earned his first career win with a career-best 2.1 shutout innings of relief at Georgia 4/21 with two strikeouts… Allowed two runs on two hits and three walks in loss to Tennessee Tech 4/16… Gave up his first career home run, a solo shot, in two innings vs. Missouri 4/12… Tossed one scoreless inning at Ole Miss 4/7… Worked two score- less innings with three strikeouts at Ole Miss 4/6… Notched his second save in as many days getting the final out with the bases loaded against Tennessee 3/31… Earned his first career save entering the game with two runners in scoring position and a one-run lead before striking out two to end the inning against Tennessee 3/30, allowed one run in 1.2 innings with a career-best four strikeouts… Tossed two scoreless innings and allowed one of three inherited runners to score in victory against Florida 3/24… Allowed two runs on three hits over two innings out of the pen at Auburn… Walked two and struck out two allowing one run while recording two outs at Auburn 3/16… Tossed two scoreless innings against Buffalo 3/13… Struck out two and allowed an unearned run in 1.1 innings against Illinois-Chicago 3/3… Walked a career-high four batters in 1.2 scoreless innings against Monmouth 2/24… Punched in three in two perfect innings against Monmouth 2/22… Turned in a scoreless frame in win over Central Arkansas 2/20… Tagged for three runs on two hits with three walks in 1.1 innings in loss to Long Beach State 2/17.

HIGH SCHOOL– Played on the 18U Team USA squad, Perfect Game All-American, 2012 2A State Player of the Year… All Saints’ Academy played in state tournament in 2012 and Team USA won COPABE Pan American Championships in 2011… Lettered five years in baseball and was team captain as a senior… Played summer ball for the Orlando Scorpions… Was a 15th round selection by the Boston Red Sox in 2012.

PERSONAL- Carson Springer Fulmer… Born 12/13/93… Son of Art and Kandi Fulmer… Has four siblings: Art, Amy, Drew and Kelly… Favorites include Justin Verlander (baseball player), Hockey (other sport), Law Abiding Citizen (movie), Entourage (TV show), Leonardo DiCaprio (actor)… Says Matthew McConaughey would play him in a movie about his life… Uses the word focused to describe himself… Says he would be a sports advisor if not an athlete… Lists winning a national championship in 2014 as his most memorable athletic moment… Roommates with Dansby Swanson and Ben Bowden.. Chose Vanderbilt for the great academic and athletic balance.