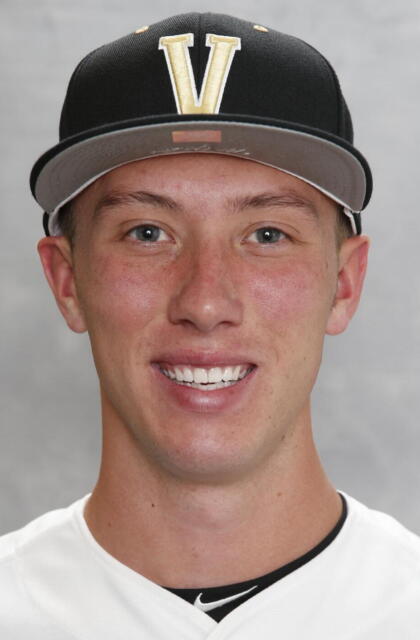 COACH CORBIN QUOTE: He is one of the most reliable kids that I have been around. His `way[apos] of life translates to the ball field. He has touched the baseball more than any other pitcher we have had in our program. He is a `winning player and person[apos] who is highly focused and quietly competitive. Not surprisingly, one of our best students on the team as well. Servant personality… loves the team more than his position.

2014 – Turned in a career outing vs. Texas 6/20 in College World Series allowing two runs on four hits over a career-best 7.1 innings and striking out a career-high eight… Picked in the 15th round by Tampa Bay, becoming the fifth Commodore and fourth VU pitcher selected in 2014 Draft… Turned in a perfect inning vs. Stanford 6/7 in Super Regional loss… Stranded two runners and tossed 1.2 perfect innings vs. Stanford 6/6 in Super Regional win… Allowed two inherited runners to score and allowed two runs in one inning of work in loss to Ole Miss 5/22 at SEC Tournament, allowed runs in three of his last four outings… Gave up three inherited runners and allowed two hits in loss to South Carolina 5/17… Penned with the loss against South Carolina 5/15 giving up a home run in the 10th inning after inheriting the tying run and allowing it to score in the ninth… Struck out two and allowed one run on one hit over one inning vs. SEMO 5/13… Allowed one run on two hits in one inning of relief at Florida 5/10… Worked the final two innings at Missouri 5/4 to notch his fifth save of the season, allowing only one hit in the win… Tossed one scoreless inning at Missouri 5/2… Worked a spotless ninth inning to finish off sweep of Georgia 4/27… Recorded the final out vs. Georgia 4/25 to notch his fourth save of the season… Notched his third save of the season with a perfect ninth inning at Arkansas 4/19… Picked up his first win of the season with a career-high five innings of relief against Texas A&M 4/12 allowing one run on two hits with four strikeouts… Tossed a scoreless ninth inning to finish off win over Indiana State 4/8… Worked a scoreless eighth inning at Tennessee 4/5… Finished off the win over Kentucky 3/29 with a spotless ninth inning… Notched his second save of the season with a spotless ninth inning against Belmont 3/25… Allowed his first earned run of the season allowing one run on one hit and three hit batters over two innings at Mississippi State 3/22… Turned in a scoreless inning at Belmont 3/18… Allowed two inherited runners to score in loss to LSU 3/14, recording one out and allowing two unearned runs… Tossed a perfect inning in win over Eastern Illinois 3/11… Worked a perfect ninth inning in win over Winthrop 3/8… Notched his first save of the season working the ninth inning vs. Stanford 3/2 striking out two… Tossed one scoreless inning in loss to WKU 2/25… Struck out the side in his lone inning of work against UIC 2/23… Worked his third straight perfect inning to start the year with a 1-2-3 inning against Lipscomb 2/19… Pitched a perfect ninth inning to finish his second game of opening weekend at Long Beach State 2/16… Finished the game with one perfect inning at Long Beach State 2/14.

2012 – Gave up one hit and recorded two outs in loss to NC State 6/4 at Raleigh Regional… Allowed two runs on two hits in one-plus inning against NC State 6/2… Recorded the final four outs in NCAA Tournament opening win over UNC-Wilmington 6/1… Tossed one scoreless inning in SEC Championship loss to Mississippi State 5/27… Gave up one run on five hits over 3.1 innings against Florida 5/26… Worked 3.2 scoreless innings with three strikeouts to notch his fifth save… Tossed 2.2 scoreless innings in win over Ole Miss 5/19 scattering three hits and fanning two… Struck out one batter and allowed one run on two hits at LSU 5/12… Roughed up for four runs, three earned, on five hits while recording two hits against Tennessee 5/4… Inherited the bases loaded and stranded all three runners, turning in one scoreless inning against Kentucky 4/29… Pitched 3.2 solid innings allowing one unearned run on three hits against Kentucky 4/27… Turned in four stellar innings to keep VU in the game allowing one run on four hits in come-from-behind win at Alabama 4/22… Gave up two unearned runs while getting one out at Alabama 4/20… Worked 3.1 scoreless innings to notch his fourth save of the season in win over MTSU 4/17… Stranded one runner and recorded one out against Auburn 4/14… Notched his third save of the season working 1.1 scoreless innings against Auburn 4/13… Tossed two scoreless innings against Belmont 4/11… Pitched 1.2 innings of relief allowing one inherited runner to score at Mississippi State 4/8… Turned in three solid innings at Mississippi State 4/6 giving up one run on two hits and a career-high three walks… Notched his second save in a row working three innings and allowing three runs, one earned, on four walks in win over South Carolina 3/31… Nailed down his first career save and first for the team against Tennessee Tech 3/27 working four scoreless innings to finish off team[apos]s third shutout of season… Struck out the lone batter he faced against Georgia 3/25… Allowed two runs on three hits while recording one out against Georgia 3/24… Pitched one inning allowing one run on two hits to snap seven-inning scoreless streak against Evansville 3/20… Extended his scoreless streak to seven innings with 1.1 shutout innings against Siena 3/14… Allowed two hits and a walk in 1.2 innings against Siena 3/13… Worked 1.1 scoreless innings with two strikeouts in loss to San Diego 3/10… Turned in one scoreless inning against San Diego 3/9… Allowed two hits and fanned two while allowing two-of-three inherited runners to score against Rhode Island 3/3 G1… Earned his first collegiate start against Louisiana Tech 2/29 allowing five runs, three earned, on five hits over two innings in his second loss… Tagged with the loss after allowing two runs in 2.1 innings against Oregon 2/24… Punched out a career-best five batters in win over Oakland 2/22… Tagged for a grand slam allowing three inherited runners to score in loss at Stanford 2/19… Pitched 2.2 solid innings at Stanford 2/19 in his collegiate debut.