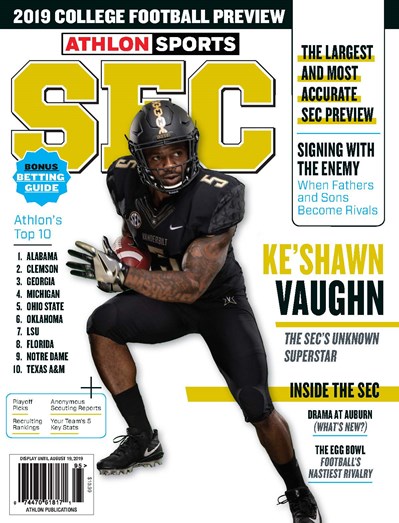 A sixth Commodore, incoming graduate transfer Justice Shelton-Mosley, was named to the fourth team All-SEC squad as a punt returner. Shelton-Mosley comes to Vanderbilt after a stellar career at Harvard.

The Commodores open the year Saturday, August 31 on campus, hosting nationally ranked SEC East foe Georgia. Kickoff for the opener has not been announced.

Vaughn, a product of Nashville’s Pearl-Cohn H.S., was splendid in his first year as a Commodore in 2018. He finished the season with 1,244 rushing yards, the second-highest total in team history, and 12 rushing touchdowns. Amazingly, he averaged an SEC-best 7.9 yards for backs with at least 100 carries.

Vaughn, who is also featured in the publication, was the SEC’s most explosive running back last year, producing 10 rushes of at least 40 yards and six carries of at least 60 yards. He concluded the year with a remarkable individual performance against Baylor in the Academy Sports + Outdoors Texas Bowl — 243 rushing yards and two touchdowns on 13 carries.

Lipscomb, from Jesuit (La.) H.S., is coming off one of the best seasons ever by a Vanderbilt receiver. He finished the year with an SEC-leading 87 receptions, good for 916 yards and nine touchdowns. Lipscomb’s receptions total ranks fourth all-time among Commodore receivers. Lipscomb enters his senior campaign among the program’s top-10 leaders with 151 receptions, 1,845 receiving yards and 19 touchdown catches.

Pinkney, a product of Norcross H.S., enters his final year as the most productive Vanderbilt tight end since the 1980s. In 2018, he registered 50 catches, 774 receiving yards and seven touchdowns. He was one of two tight ends nationally to post at least 50 catches and a 15.0-yard average. For his career, Pinkney has 94 catches, 1,327 receiving yards and 12 touchdown catches.

Cochran, a product of Greater Atlanta Christian (Ga.) H.S., played virtually every offensive snap for the Commodore last year at right tackle. He is expected to move to left tackle this year. He produced 20 domination blocks in 2018, helping open running lanes for Vaughn and protecting quarterback Kyle Shurmur, who finished his career as the most productive in Vanderbilt history.

Shelton-Mosley, a receiver-return specialist from Capital Christian (Calif.) H.S., was a 2017 FCS First Team All-American and three-time All-Ivy League recipient at Harvard. That year, he averaged 18.8 yards as a punt returner and posted 36 receptions. During his Harvard career, he returned three punts for touchdowns. He also accumulated 148 receptions for 1,921 yards.

The Commodores return 14 starters — eight on offense, five on defense and one specialists — among 49 letter winners from a 2018 squad that earned an invitation to the Texas Bowl after closing the regular season with home victories over Ole Miss and Tennessee.

Besides hosting Georgia, the Commodores’ home schedule includes LSU on Sept. 21, Northern Illinois on Sept. 28, UNLV on Oct. 12, Missouri on Oct. 19, Kentucky on Nov. 16 and East Tennessee State on Nov. 23.

Vanderbilt officials kept 2019 season tickets at the same rates as a year ago. Season-ticket packages for the Commodores’ seven-game home schedule starts at only $308 for premium sideline seats and $178 for reserve end-zone sections of Vanderbilt Stadium. Tickets can be purchased here.