WICHITA, KAN—Two Vanderbilt alumni bolted to the top of the leaderboard Friday at the USBC Queen’s, one of the major events on the Professional Women’s Bowling Association Tour.

Giselle Poss, a 2017 first-team All-American, scorched the Northrock Lanes with a 1,280 5-game set to seize the lead after two days and 10 games while Josie Barnes, a three-time winner on the WPBA Tour and current Associate Head Coach at Vanderbilt, sits in fourth place in this field of 192.

Poss crafted games of 256-254-204-266-300 en route to her memorable total, which is the third highest in Queen’s history.  Ironically, the Queen’s record was a 1,297 set established in 2015 by Kristin Quah, then an incoming freshman at Vanderbilt.

“I tried to go back to basics,” Poss said afterwards, “things such as timing and fundamentals. My one thought was just pushing the ball away on time and letting everything else take care of itself.” 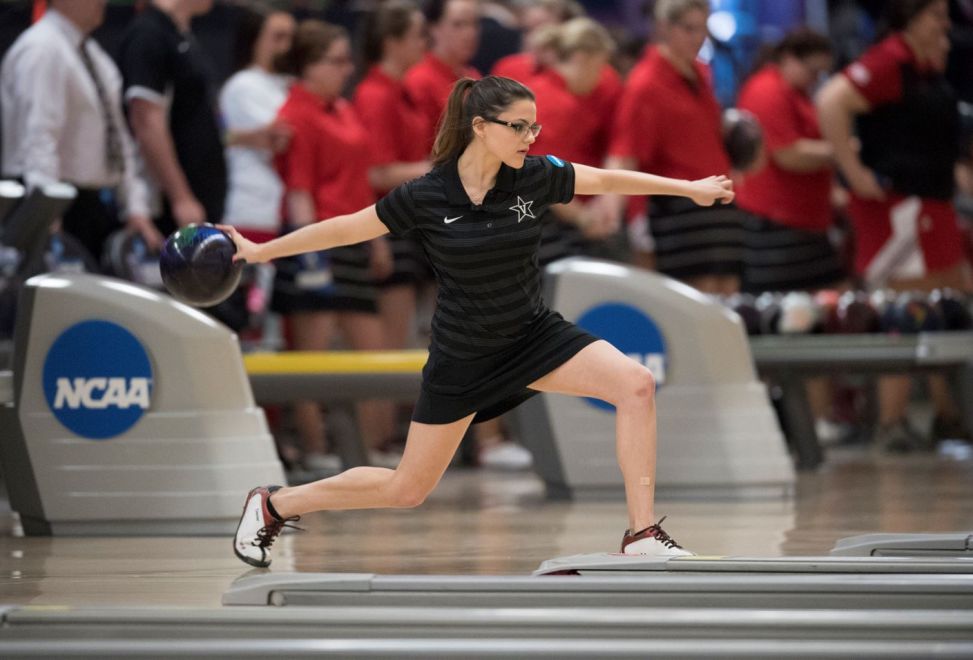 Poss’ game was not on autopilot, despite the impressive run.  Her day included several decisions on which ball to throw, especially when the lanes transitioned in the third game and she was struggling five frames in.  But the decisions were all good ones and after salvaging a 204 she went 266-300 to finish the day.

“Oh, I was a little nervous,” Poss admitted on her 300, her first as a touring professional and first in about five years.  “I took the same amount of time on each shot, kept the same pre-shot routine and made sure I was breathing well.  It feels great to have some success after several weeks of not having much of it.”

Barnes lurks in fourth place after back-to-back solid sets of 1,114 and 1,109, just 87 pins off the pace with five more qualifying games remaining Saturday.  The field gets trimmed to the top 63 plus the defending champion for double-elimination match play.

Complete results and a good live stream are found on bowl.com.