Former Vanderbilt kicker turns to new career with the Navy

NASHVILLE, Tenn. — Three years after working under pressure as the kicker for the Vanderbilt Commodores, Tommy Openshaw is facing a new challenge.

After finishing graduate school, Openshaw decided to pursue a career in the Navy as an Aviator. 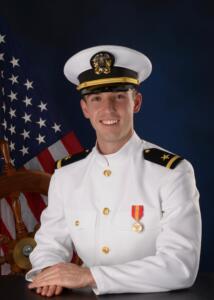 Although he has no prior flying experience, Openshaw does have experience with leadership. He received a master’s degree in Leadership and Organizational Performance from Vanderbilt’s Peabody College in May 2019.

“Leadership and Organizational Performance is basically a mix between a master’s in business administration and managing talent,” Openshaw said. “It gave me the framework and language to articulate leadership.”

When it comes to aviation, Openshaw feels ready for that pressure thanks to his football career. 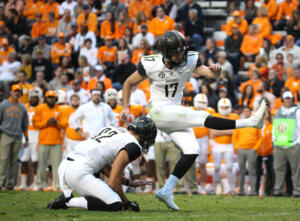 “Being a kicker, performance and pressure are always a part of the job,” Openshaw said. “At Officer Candidate School, I found the pressure situations we were placed under to come somewhat naturally to me due to what I had dealt with during my football career. I think that is why a lot of pilots in the military are former student-athletes.”

Growing up, Openshaw was a part of a Naval household. His mother, father, uncle and grandfather all attended the United States Naval Academy. Openshaw could have followed his family’s footsteps and attended the Naval Academy as well – he was offered a football scholarship there out of high school.

But something else drew him away.

“I do not think at that time I was ready to commit myself to military service,” Openshaw said. “When Vanderbilt offered, I knew I could not turn down an opportunity to play in the SEC and receive this education.”

At Vanderbilt, Openshaw was the starting kicker from 2014-17. He is second in school history in total points scored with 224.

After going 15-for-19 on field goals his junior year, he went just 3-for-7 his senior year. Like he normally does, Openshaw took his down season and learned from it. 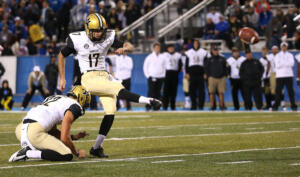 “My successes in football gave me confidence,” Openshaw said. “And my failures gave me humility and perspective. Nobody wants to follow an officer who thinks they are better than their sailors, soldiers or Marines. We all want to follow someone whose attitude is contagious and stokes confidence within ourselves.”

Before graduate school, Openshaw graduated at Vanderbilt with a double major in economics and engineering sciences.

On March 1, Openshaw started Officer Candidate School and on June 19, he was commissioned.

“To me, leadership is finding the harmony of confidence and humility,” Openshaw said. “Football molded me into the man that I am and the Naval Officer I will become.”