Opening Round at the Masters

Augenstein 1-under before play suspended by darkness

AUGUSTA, Ga. — Two of Vanderbilt’s own each completed their first day of play of the Masters Tournament on Thursday in Augusta, Georgia.

Current fifth-year senior John Augenstein, one of six amateurs competing in the event, shot a 1-under through 12 holes in his Masters debut. The Owensboro, Kentucky, native carded birdies on 4, 8 and 9. 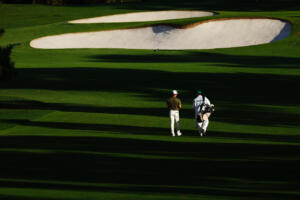 Former Vandy standout Brandt Snedeker was also part of Thursday’s opening round. The 39-year-old finished 1-under after an up-and-down day that included an eagle on 4 and birdies on 2, 8, 13 an 15.

Snedeker is tied for 34th going into the second round.

Grouped with Charles Howell III and Jazz Janewattanond, Snedeker is scheduled to tee off at 10:16 a.m. CT on Friday. Augenstein is playing with Rickie Fowler and Danny Willett and is scheduled to begin his second round at 6:11 a.m. CT Friday.