Off the Court With Kurtz

A Q&A with the Vanderbilt women's tennis standout

NASHVILLE, Tenn. — For the Vanderbilt women’s tennis team, the fall season may have looked a little different – but the dominance is still the same.

While the Commodores have not been able to take long trips like they normally do for fall tournaments, they have been holding down well in the state of Tennessee.

Kurtz, a fifth-year senior from Atlanta, Georgia, rejoined the team with more than 160 career college matches played. Her leadership and experience on the court is essential for a young team.

The Vandy spring season was cancelled after just 10 matches due to the COVID-19 pandemic. There are only four players on the current team that have experienced a full college season – Kurtz, Christina Rosca, Amanda Meyer and Lauren Gish.

Off the court, Kurtz is a model student as well. In the classroom she has been a part of the SEC Academic Honor Roll every year since 2016.

She is also active in her community. Kurtz has been honored as part of the SEC Community Service Team in both 2019 and 2020

Coming out of high school, the former five-star recruit skipped her senior year to jumpstart her Commodores career early. Since then she has won more than 70 singles matches and 27 doubles matches.

Kurtz recently took some time with VUCommodores.com to talk about tennis, Vanderbilt, her ability to speak three languages and more. 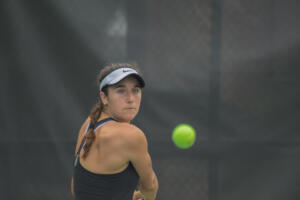 VUCommodores.com: Why did you decide to come back for your fifth year?

Kurtz: “I decided to come back for a fifth year to write my own ending, which I wasn’t able to do last year because of COVID. Once I realized I had the amazing opportunity to return and be a leader on the team and continue playing tennis, while pursuing a master’s in finance and receiving a great education – it was an irresistible option.”

How are you handling the challenges of being only one of four athletes on the team to have experienced a full season?

“We have an extremely young team which provides a different perspective from other years but there is so much potential and opportunity with that youth. I have really enjoyed forming closer relationships with my teammates and leading them on and off the court. I hope to be a great role model for the girls and love to be a resource for them. After four years I have had my fair share of ups and downs and so I love to pass along a lot of my experiences and lessons I have learned in order to help out my teammates.”

Do you have different strategies when you play with different doubles partners?

“I oftentimes get to play with many different doubles partners and I especially love being able to play with some of the younger girls on the team and help mentor them. Each doubles pairing results in a different strategy and the coaches do a great job helping us create our identity on the tennis court. There is so much to teach and learn for doubles and I know I have improved drastically in my understanding of doubles since I have been at Vanderbilt.”

You speak Italian, French and Spanish. How did you learn all of them all and what sparked your interest in learning them?

“My mother is Italian so I learned to speak it growing up. This sparked my interest and affinity for languages. I was able to pick up other Romance languages fairly quickly due to my Italian skills. In high school I studied French and Spanish and continued this throughout college where I eventually minored in Italian and French. I hope to live in Europe at some point and love traveling. Languages help you connect better with people of different cultures and that is really what fascinates me.”

You skipped your senior year of high school to begin your career at Vanderbilt in 2016. Do you have any regrets in missing that final year?

“I have no regrets about leaving high school early. I had an amazing freshman year and I would not do it any differently. I really loved the team freshman year and had amazing senior leaders that I would have never met if I had not come.”

Why did you pick Vanderbilt?

“I picked Vanderbilt because of the amazing coaching staff that valued me as a person, strong tennis program and remarkable academics.”

What are your goals after your college career is over?

“I recently accepted a job offer as a financial analyst at a portfolio company of a private equity firm that specializes in education.”