NASHVILLE ÃƒÂ¢Ã¢â€šÂ¬Ã¢â‚¬Å“ When Dare Odeyingbo‘s younger brother, Dayo, began sifting through scholarship offers from college football programs, the older Odeyingbo mostly stayed quiet. Dare was already a defensive lineman at Vanderbilt, but he understood that his brother’s decision was just that: his.

“I told him what I knew, but I made sure to let him know this decision was completely up to him,” the older Odeyingbo said. “It’s his four or five years of college, not mine.”

Dayo ultimately signed with Vanderbilt in February 2017, joining forces with his brother on the Commodores’ defense. More than two years later, the Odeyingbo brothers are linchpins of Vanderbilt’s defensive line. That family connection has worked wondered for the Dores ÃƒÂ¢Ã¢â€šÂ¬Ã¢â‚¬Å“ and the Odeyingbos.

The Odeyingbo brothers enter 2018 as key pieces for new Vanderbilt defensive coordinator Jason Tarver. The Commodores return just four starters on that side of the ball, including Daro Odeyingbo, who started 11 of 12 games at defensive end last season. The 6-2, 272-pound Odeyingbo led the Dores with 11 tackles for loss and finished second on the team with four sacks.

Dayo Odeyingbo was one of six true freshmen to see action for Vanderbilt in 2017. He played in all 12 games at defensive end and recorded 20 tackles, 4.5 TFLs, 2.5 sacks and an interception. Dayo said having his older brother along for the ride helped him adjusted to the speed of SEC football.

“It definitely helped having someone in the locker room that I knew and have known forever,” Dayo said. “For everyone, the first year is always the hardest. Having family here and not hundreds of miles away really helps.”

The Odeyingbos, who hail from Irving, Texas just outside Dallas, never played on the same team prior to their careers at Vanderbilt. Dare Odeyingbo starred at Cistercian Prep, where he played defensive end, linebacker and running back as a two-year captain. Dayo, meanwhile, was a two-way starter at defensive end and left tackle at Carrollton Ranchview. 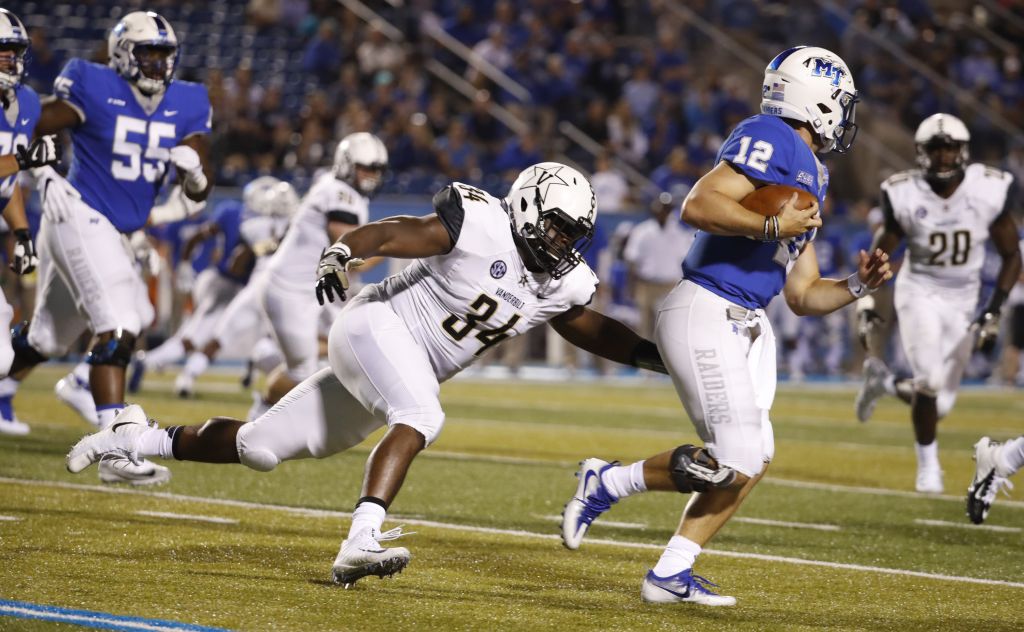 Now it’s no surprise the Odeyingbos have enjoyed finally wearing the same uniform.

“We had never had a chance to play together growing up because we actually went to different high schools,” Dare said. “This is really the first time we’ve been on the same team. It’s been a lot of fun. The guys on the team become your family, but it’s nice to have actual family up here at the same time.”

The Odeyingbos no longer need to adjust to college football. Now they get to help return the Commodores’ defense to the top of the SEC. Last season, Vanderbilt’s defense was one of the nation’s most smothering units through a 3-0 start, when it limited a ranked Kansas State squad to seven points. The Dores then struggled in SEC play before ending the regular season with a win over Tennessee. One big problem during the stretch was an inability to rush the passer; Vanderbilt finished 10th in the conference in sacks per game (2.25).

This fall, head coach Derek Mason said he expects a renewed energy on defense under Tarver ÃƒÂ¢Ã¢â€šÂ¬Ã¢â‚¬Å“ with the Odeyingbos playing a big part up front.

This summer, Dare Odeyingbo is enjoying the full Vanderbilt experience. He is splitting his time between class, workouts and an internship with Hashed Health, a Nashville-based firm that focuses on implementing blockchain and distributed ledger technologies in other businesses. The internship has taught Dare the importance of efficiency in the business world. In the fall, he hopes to be just as efficient against opposing offenses, which must once again prepare for dual Odeyingbos on each play.

That potential has both brothers excited for the 2018 season.

“The defense hasn’t technically changed too much, but there’s a change in energy,” Dayo said. “We have a lot of young guys who are coming up and are great athletes and still learning the game. They’ll get more reps, and they’re already getting better and better every week.”