NASHVILLE, Tenn. – Nine nonconference games are on the 2020-21 slate as the Vanderbilt women’s basketball program announced its pre-SEC schedule on Thursday.

The SEC schedule and game times will be announced at a later date.

Nov. 25 vs. Tennessee Tech:
This will be the 20th meeting with the Golden Eagles. Vanderbilt has won the last four matchups, including a 75-61 victory last season.

Nov. 29 at Middle Tennessee State:
This will be 19th meeting between the local rivals and Vanderbilt’s second trip in three years to Murfreesboro. The Commodores have won seven of the previous 10 in this series, but the Blue Raiders have taken the last two.

Dec. 2 vs. Texas Tech
This will be the sixth all-time meeting between the Commodores and Red Raiders. Texas Tech has won all five previous encounters, including Texas Tech’s 60-46 win at the 1993 Final Four in Atlanta. The first meeting between these programs was also the last time the Red Raiders visited Nashville — the Commodores fell 74-69 in the 1985-86 season opener. In the latest matchup, No. 13 Texas Tech defeated the 22nd-ranked Commodores, 81-71, on Dec. 29, 2001 in Lubbock, Texas.

Dec. 5 at Arkansas-Little Rock
This is the first meeting with the Trojans, but Vanderbilt fans are familiar with Little Rock, Arkansas, as the Commodores are 7-3 all-time in the SEC Tournament in Little Rock, including the 2009 SEC Championship.

Dec. 8 vs. East Tennessee State
Vanderbilt is 6-2 all-time against Buccaneers, including six straight wins dating back to the 1980-81 season. The last meeting between these programs was four years ago to the day and Vanderbilt won 80-72 in Johnson City.

Dec. 13 at UT-Chattanooga
For the first time since the second round of the 2004 NCAA Tournament, Vanderbilt will match up with Chattanooga. In that last meeting, the Commodores advanced to the Sweet 16 with a 60-44 win in Chattanooga.

Dec. 17 vs. VCU
In the only other meeting between these programs, Vanderbilt defeated the Rams, 75-73, at the 1989 Marshall Classic in Huntington, West Virginia.

Dec. 20 vs. Gardner Webb
This will be the first all-time meeting between the Commodores and the Bulldogs from Boiling Springs, North Carolina. Gardner Webb is a member of the Big South Conferencee.

Dec. 28 vs. Samford
Vanderbilt has won all three previous meetings with the Bulldogs.

Mark your calendars with pencil. All games and dates are subject to change. 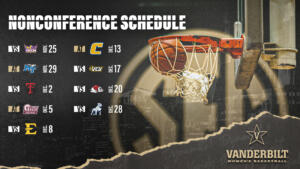