Myles of Growth, Myles to Go

Through 34 career games in black and gold, the 6-foot-7 shooter is often found spotting up in the corner, snatching a pass from a teammate and launching a 3–which swishes through the net to the delight of the home crowd or the chagrin of the opposing fans.

Stute has made 57 shots in his young Commodore career, 42 of them from behind the arc. Those numbers have earned Stute a reputation as a dangerous scorer on opposing scouting reports.

But for all that, Stute knows he has much more to give to maximize his potential as a complete basketball player. It’s why he chose a growth environment like Vanderbilt in the first place. 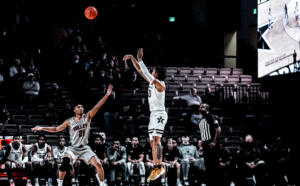 “I think it was really just coach (Jerry) Stackhouse,” Stute explained. “Having an opportunity to learn from somebody like that who has been to a place you’re trying to go to. He’s exactly who I want to be in 18 years.

“It’s crazy to have the opportunity to learn from somebody with that tutelage and be able to experience that every single day, every single practice, every single game with an amazing coaching staff. It just makes your experience as a student-athlete at Vanderbilt second to none.”

From the North Star to Three Stars

Stute was born in Minnesota and grew up in Minneapolis. A job opportunity for his father, however, moved the family to Washington D.C. during the winter of Stute’s eighth-grade year.

Adjusting to the nation’s capital, a new set of friends and a higher level of competitive basketball was, admittedly, a tough adjustment for Stute at first. He enrolled at Gonzaga Prep and joined an elite basketball program playing some of the top competition in the country in the Washington Catholic Athletic Conference.

“It was great having the opportunity to play somewhere like Washington D.C., which is known as a hotbed nationally with a lot of good talent with good players everywhere,” Stute said. “The conference has four or five top-25 teams in the country every single year, so playing those guys two times a year, sometimes three times a year, automatically makes you better having to go through that grind with your team. It makes you a better overall basketball player.” 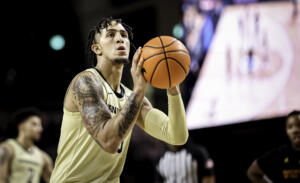 Stute began to grow physically and as a prospect. As a senior, he was a McDonald’s All-American nominee and earned all-state accolades while helping Gonzaga win a DC State Athletic Association championship.

“I just kind of put my head down, no matter where I was, what environment I was in,” Stute said of his rise as a prospect. “Even in Minnesota, I was just really, really working hard at the game of basketball. At a young age–in middle school and then as I transitioned to high school–not having too many friends but having a core group of friends really just allowed me to focus on what I love and my craft. That’s been basketball through and through.”

Shooting the Trey and Meeting Tre’

Years ago,  Myles’ father, Will Stute, listened as a group of friends lauded Tre’ Kelley’s basketball prowess. A guard, Kelley starred at the University of South Carolina from 2003-07 and went on to a 14-year career in professional basketball.

He was also originally from Washington D.C.

Will Stute got the idea to connect his three sons with the former SEC standout. Kelley and Myles immediately grew close. 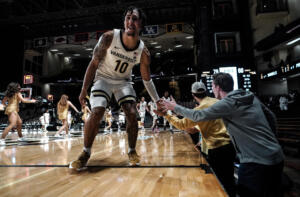 “I don’t just train kids,” Kelley said. “I don’t just work them out at the gym, and they don’t hear from me until the next time I come to the gym. I always try to teach them perspective and things about life. And me and Myles, we just sit back and talk a lot before and after the workouts. Those conversations trickled over to the phone, to text message and long calls when he was on the road during some of his trips.

“He started wanting to pick my brain about different things. I kind of try to teach segment by segment. Just step by step. Every part of the game, every part of the floor, offensively and defensively. I’ve played a lot of basketball, so I felt like I had a lot of knowledge to give back to the youth. He’s been one of my best kids.”

Kelley and Stute were connected as products of the D.C. basketball scene. But what Stute appreciated most about his new mentor was Kelley’s honesty, including the harsh truths about how he needed to be better in all areas of his game.

The small things are what are most important to Kelley, so if Stute is doing some of those small things wrong, he lets the young guard know about it. Kelley also drives home the point that playing time, starting or coming off the bench, and involvement in the team’s game plan are all connected to Stute’s consistency and effort on a daily basis. That comes in games, practices, the film room and everything else involved with the Vanderbilt program.

Plays like the one Stute made Tuesday at Arkansas, a blocked shot in the closing seconds to preserve a 75-74 win, indicate the sophomore is on the right track.

“If you’re not rebounding well, you’re not playing defense well, you don’t feel like you’re in great shape, you need to fix those things and that helps you become consistent,” Kelley said. “That’s what the great players do. They are consistent, and night in and night out, they are going to give you something that helps the team win.

Success spreads through the branches of the Stute family tree.

Will is a prominent attorney in the field of corporate law. Myles’ mother, Natalie Stute, was a college bowler at Florida A&M and is now the chief human resources officer at Consilio, a legal services company. Older brother Kai Stute returned to Minnesota to work in the health care industry. 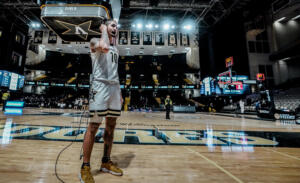 At Vanderbilt, he encounters the same commitment to excellence on and off the court. And he’s taking advantage of the opportunity to add to his list of mentors.

“I’ve grown tremendously over the past 18 months,” Myles said. “Not only has our team gotten better, but I think the resources around Vanderbilt have also gotten better with Vandy United and the amount of support we have within the Vanderbilt system. I think we have no choice but to grow at a place like this.

Leaning toward a sociology major with a minor in business, Stute has his eyes on a possible coaching career once his playing days are through. But he has a whole lot of playing days ahead of him and has vowed to make the most of them. And not just behind the 3-point line.

Stute hopes the Vanderbilt faithful see that each time he steps on the court inside Memorial Gymnasium, as he will at 11 a.m. Saturday when the Commodores (9-4, 1-0 SEC) host South Carolina  (9-4, 0-1 SEC).

“I just want [Vanderbilt fans] to know me as a hard-worker,” Stute said “I want them to remember the good days, the bad days, I want them to take it in and say ‘There’s never a day where he quit or hung his head.’