NASHVILLE, Tenn. – In a season that has been like no other, the Vanderbilt soccer team had a performance in the SEC Tournament that was like no other.

The Commodores went the distance by playing four games and scored the most goals ever in the 26-year history of the event with 14.

“(This team showed) incredible testament to their resilience and toughness,” head coach Darren Ambrose said. “They put themselves on a mission.”

Oh, what a mission it was.

It was the first SEC Tournament crown for Vandy since 1994. In the past three seasons, Vanderbilt has won the Tournament championship, the East division and the regular season championship.

After an up-and-down regular season slate that was filled with scoring three unanswered to win the opener over Kentucky, three losses in extra time and a thrilling double-overtime win at Florida, Vanderbilt was in unfamiliar territory ending the regular season at 4-4.

Four Dores – Haley Hopkins, Maddie Elwell, Ella Shamburger and Abi Brighton – earned recognition from the SEC for the season. Hopkins was named All-SEC, Elwell and Shamburger were tabbed to the second team All-SEC and Brighton was named a member of the All-SEC freshman squad.

A season ago, they fell to eventual champion South Carolina 2-0 in the semifinals. As the No. 7 seed the Commodores wanted to change the narrative.

A 4-0 drubbing of 10th-seeded Mississippi State highlighted by a Brighton rocket from 20 yards away gave way to a rematch against in-state rival and second-seeded No. 13 Tennessee. The Commodores avenged a Week 2, 1-0 overtime loss with a resounding 4-2 victory that sent Vanderbilt to the semifinals for the third time in four years.

Despite conceding in the first minute of the championship match, Vanderbilt leveled two minutes later via a Kimya Raietparvar penalty kick right before taking a lead they wouldn’t relinquish two minutes later when Raegan Kelley headed in a cross from Leila Azari to go up 2-1.

To put the match firmly out of reach, Brighton put home a screamer in the 54th minute for the 3-1 advantage. 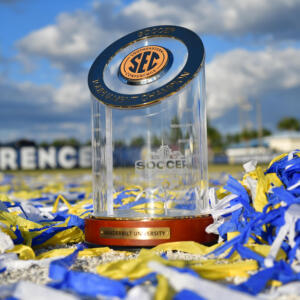 Following the match, Ambrose added this about the team, “this week cemented in their minds that we belong and we’re a force to be reckoned with,” and that he, “couldn’t be happier to be with this group.”

With the SEC Championship won, Vanderbilt has locked up an automatic bid to the NCAA Tournament. Due to concerns stemming from the COVID-19 pandemic, all NCAA fall championships were postponed and the tournament is tentatively scheduled for the spring with the College Cup set for May 13-17, 2021, in Cary, North Carolina.