by Chad Bishop and Graham Hays

NASHVILLE, Tenn. – It is to Vanderbilt’s great benefit that Quentin Millora-Brown preferred the camaraderie of basketball to the solitary nature of fencing. Imagining a sabre or épée in the 6-foot-10 senior’s hands, it may also have spared a generation of young fencers from nightmares.

As the Vanderbilt men’s basketball team opens its season Wednesday in Memorial Gymnasium against Alabama State (0-1), Millora-Brown is likely to play a key role. The Commodores will need his rebounding, defense and post presence as they attempt to reach the NCAA Tournament for the first time since 2017. Yet they almost didn’t have him at all. And not just because he played his freshman year at Rice University before transferring to Vanderbilt. Growing up in Virginia, Millora-Brown got his start in sports by following his dad’s lead in fencing.

Although Millora-Brown insists now that he wasn’t all that good on the piste, as the long, narrow competition area is known is fencing, it wasn’t any lack of ability that stopped him. It was a scheduling conflict. By middle school, weekend afternoons only offered enough time for fencing or basketball. He chose the one that required collaboration. He liked hanging out with his teammates. He liked what happened when they worked together and had each other’s backs.

People are important to Millora-Brown. His people–teammates, peers in the mechanical engineering program, his extended Filipino family. And if success is sometimes a slow or circuitous process, it’s all the sweeter when you have the right people around you.

“It’s been a building process for us,” Millora-Brown said. “Now that we have a core group of guys that have really been in the system, understand the system and are able to expand on the system in our own ways, I think that’s been really good.

“We’ve been hitting that wall each year. We’ve hit it a little bit more every year, and I think that this year is the year for us. We’re going to break through that wall. We’ve been banging on it, and we’ve been close in almost every game we’ve played. We’ve been right there.”

His grandfather and grandmother, before she passed away about a decade ago, taught him about his Filipino heritage. To this day, he can’t help but smile in recounting his grandfather’s stories about growing up on a mango farm, throwing rocks at monkeys in mango trees so they would drop the fruit to the children below, or how the community would dig trenches on the beach to trap fish for easy catching. The stories are entertaining. The people telling them are inspiring.

“It’s definitely a part of me that shaped me into who I am today,” he said of his background. 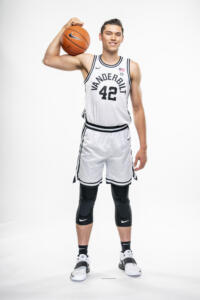 Millora-Brown has never been to the Philippines, but he experienced the culture through the Filipino community in Virginia. Growing up, he played in the Filipino-American Youth Basketball Association, a formative experience in which simple league games turned into a community event with Filipino meals and pick-up games for members of all ages.

“In that culture, if you’re not starting 60 minutes late you’re definitely not doing something right,” Millora-Brown laughed. “There’s definitely talking and chatting and so much energy — everyone is family. If you’re half Filipino if you’re full Filipino, it doesn’t matter. You’re family. If you just show up? Family. Everyone is always family.”

Basketball may yet be his ticket to visit the Philippines for the first time. The country is home to a respected professional league, and he could potentially qualify to play for the country’s national team. It would be a perfect match between his lineage and his passion. In the meantime, embracing his Vanderbilt family could transform his senior season into one to remember for both student-athlete and team.

Knocking Down the Wall

Between Millora-Brown’s time at Rice and Vanderbilt, Wednesday’s home opener will be his 52nd collegiate game. His best as a Commodore came this past December against Mississippi Valley State, when he had 12 points, eight rebounds, a block and an assist. But across two seasons on the court (he sat out the 2019-20 season as a transfer), he totaled four double-doubles, shot 62 percent from the field and scored in double digits in nearly a quarter of his appearances.

This season offers the chance for even more. While center Liam Robbins recovers from a foot injury, Millora-Brown will start the campaign in a key rotation role.

“It’s an opportunity for me to show what I have,” Millora-Brown said. “Hopefully when Liam comes back, that will be great because we’ll be able to switch things up a little bit on teams and he’ll be something different.” 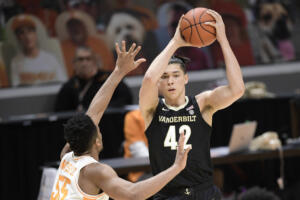 It’s a good start that head coach Jerry Stackhouse said had as good of a summer and fall as anyone on the roster.

As the opener approached, Stackhouse talked about watching film and seeing his student-athletes talking, supporting and encouraging each other. To him, that was evidence of a program ready to take the next step. It’s also evidence of the camaraderie that Millora-Brown craved, the reason he chose the sport. For a member of the SEC Academic Honor roll, it’s no different off the court.

Part of his senior project inside his major is to help construct a mechanical elephant calf that could be featured at the Nashville Zoo.

He and his classmates began their studies by learning the theories underlying such a project. Now they are turning theories into reality. It’s a scenario not unlike the growth of Vanderbilt basketball during Millora-Brown’s time in Nashville. Learn how to do it. Then do it. Together.

“It’s always a process. Big changes don’t happen in one day,” he said. “You got to take those steps along the way and have those growing pains to get something that is worth having.”