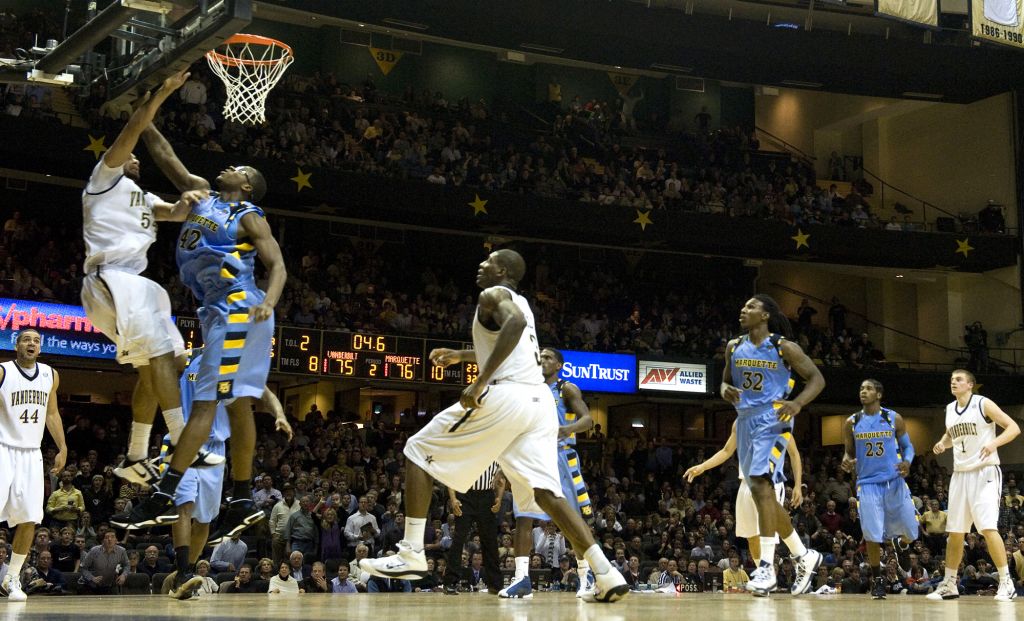 The Commodores return from their holiday break to take on nationally ranked Marquette Thursday night in the Bradley Center in Milwaukee. The game will be televised nationally on ESPN2 and ESPN3 at 8 p.m., and can also be heard live on the Vanderbilt Radio Network from IMG College in the middle Tennessee area and online at vucommodores.com.

Vanderbilt and Marquette will play for the second consecutive season – last year at Memorial Gym, Commodore forward Andre Walker made a running layup with 4.1 seconds remaining and then Vanderbilt withstood a final Golden Eagles’ shot as the buzzer sounded to come away with the 77-76 victory.

More On The Marquette Series

More on Marquette
Marquette is 11-1 on the season, with their only loss coming at LSU on December 19. Darius Johnson-Odom leads the Golden Eagles in scoring with 17.9 points per game, with Jae Crowder adding 17.3 points and Vander Blue chipping in 10.2 points per contest. Crowder leads the team on the glass with 7.3 rebounds per game.

2011-12 vs. Ranked Opponents
Vanderbilt is 0-2 against ranked opponents this year, with both games going to overtime. The Commodores dropped an 82-70 decision to Xavier on November 28 at Memorial Gym, and then a 62-60 game to Louisville on December 2 in Louisville.

Last Time Out – Vanderbilt 89, Lafayette 58
John Jenkins tied a career-high with seven made three-pointers in route to a game-high 27 points to lead Vanderbilt to an 89-58 win over Lafayette on December 21. Jeffery Taylor (16) and Lance Goulbourne (15) also scored in double figures, and point guard Brad Tinsley tied a career high with 10 assists in the victory.

Jeffery Taylor Is Active SEC Leading Scorer
Taylor is the active scoring leader in the SEC with 1,531 career points. He leads Florida’s Erving Walker by 32 points. Taylor is also the SEC’s second-leading active rebounder with 621.

Taylor, Jenkins Moving Up Scoring Chart
Jeffery Taylor, who is averaging 17.9 points per game in his senior season, is now in the top 10 on Vanderbilt’s all-time scoring list with 1,531 career points. If he continues at the current pace, with 19 regular season games remaining, would end up with 1,877 points, which would put him third on the all-time list. At his current scoring pace, Jenkins would end the regular season with 1,565 points, which would make him 10th all-time.