Leyen Goes Out With a Roar

This is the first piece in a four-part series highlighting Vanderbilt bowling’s four outstanding seniors:

NASHVILLE, Tenn. — As a Vanderbilt honors student, Bryanna Leyen has had many career options.

She’s watched as some of her friends are taking six-figure starting salaries in flashy corporate companies and she admits it’s given her pause because she has chosen something decidedly different – the much lesser-paying, old-school profession of teaching.

Teaching in the lower elementary ranks to be exact. It’s not the “cool thing” to be doing – but Leyen sees it as a calling.

“When I was younger, I didn’t want to be a teacher,” said the Perry Hall, Md., senior who has spent many hours of her college career on Vanderbilt’s nationally prominent bowling team. “Who would want to teach?

“Once I started high school I was in the best magnet school in our county and I toured the Teacher Academy of Maryland. That’s when I started wanting to teach. I wanted to focus on my future family life. My mom was always there for us when we were growing up and I wanted something similar for myself. If I was a teacher I’d be on the same schedule as my kids and that’s something I really valued.”

That kind of forethought is typical Leyen, always looking ahead with a determined but prudent eye. Her father Chris, an electrical and environmental engineer, suggested she go into engineering because math and science were her strong suits.

Bryanna Leyen was so gifted in those she tested out of both at Vanderbilt.

She thought about her dad’s engineering pathway but watching her family move multiple times as he was promoted helped turn her thoughts back to the children. And her student teaching experiences confirmed it.

“I love working with the young children,” Leyen said. “They are very optimistic and happy. It’s nice to be around them. When I’ve gone through tough times, if I seem sad they notice and ask, ‘What’s wrong?’ And when I tell them they say, ‘But you can make it better.’

“It’s nice to have those reminders that this moment isn’t a big deal – to have that positive attitude.”

Leyen also admires the same kind of determination people see in her come out in the youngsters.

“Young children keep trying and trying and they don’t give up easily,” she observed. “They get a problem and think, ‘I’ll figure it out.’ That’s really cool to watch.”

Determination and self-discipline are hard-wired into Leyen’s DNA.

She was recruited to Vanderbilt after a sparkling junior bowling career, which included winning the Collegiate Masters national championship in 2014 and dominating Maryland junior events.

However, joining Vanderbilt’s talented roster of older and more experienced bowlers came with its adjustment and realization: she was no longer the biggest fish in the pond.

“It was hard not to be on the travel team my freshman year,” Leyen admitted. “It was tough watching my teammates leave campus for a tournament and I was staying home. Being here I got a reality check and going through this program made me emotionally stronger.” 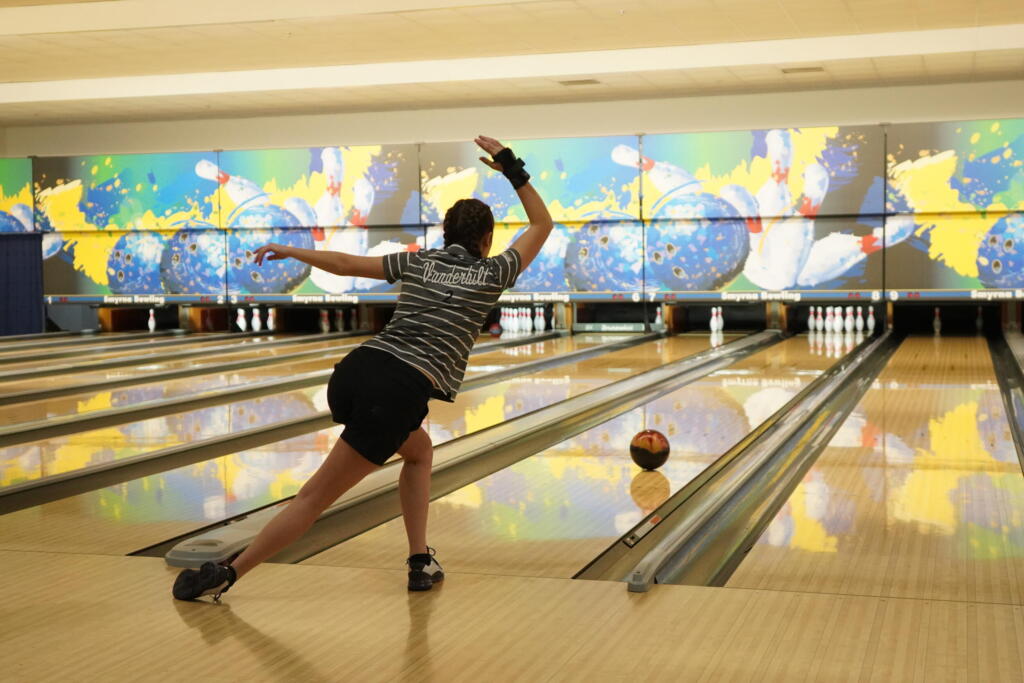 Strength is a Leyen asset as well.

The Leyen family is tight-knit and physically active. Twin brothers Aidan (a junior electrical engineering major at Alabama) and Tristan (a junior marketing and sports management major at Auburn) and father Chris are veteran runners who will join her this October in a Ragnar Relay Race where the foursome will cover something crazy – like 90 miles crazy – with each runner handling three separate legs.

“I used to run every day after school from middle school until I came here,” Leyen said. “I’m picking it up again now that I’m graduating. I’ve run half-marathons with my dad.”

“If I get fixated on something I really work for it,” the three-time Dean’s List member said. “One semester I got a 3.7 and I decided I wanted a 4.0 the next semester. I worked really, really hard for that.”

Leyen, who is heading to Vanderbilt’s nationally top-rated Peabody College of education and human development this fall armed with a prestigious scholarship, said her graduate degree will give her more career options.

“My ultimate goal is to be an elementary education teacher,” she said, “but with this training in educational leadership I will have the opportunity to expand my role in education and increase my income potential.”

Leyen is thankful for the lessons she learned within Vanderbilt’s bowling program – aside from the unforgettable memories such as winning the 2018 NCAA Championship or bowling one of the best games (276) in program history. 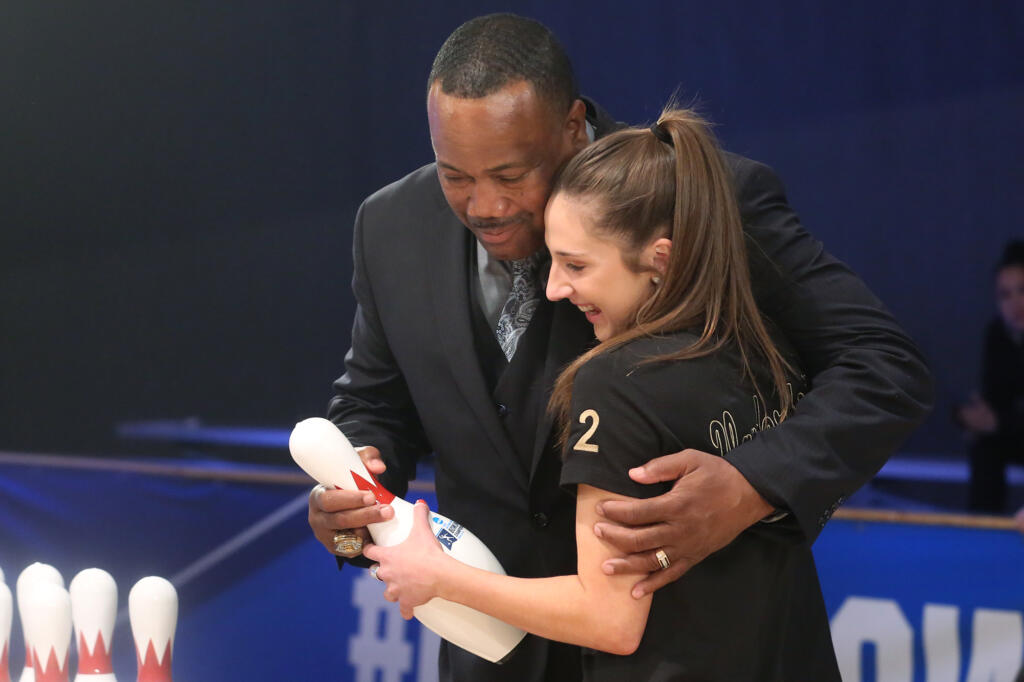 “I’ve learned how to work with people who are not just like me,” she said. “I had grown up in a neighborhood where we were all similar. The team is not like that and at first I had trouble connecting with those who seemed different. Some things I said might bother someone, for instance. The diversity of our team was really helpful to me.”

“Without a doubt I’d choose Vanderbilt again,” she said. “I’ve been taking graduate courses this year and I’ll be halfway done with my graduate program at graduation. Academically and athletically, it was the best school I could go to.” 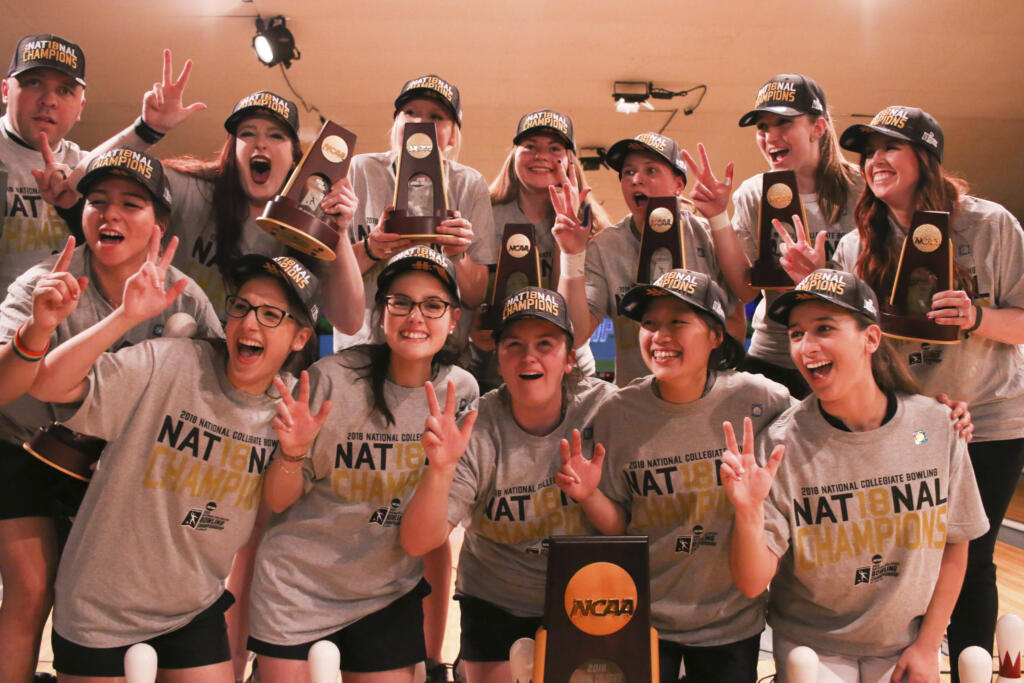