It still strikes me that, almost 12 years later, there is still so much weight behind saying those words.

Coming out can be a momentous event in a person’s life—a pivotal moment of clarity and vulnerability, of freedom and authenticity. Mine was more of a slow burn, a gradual build toward truth and a painful journey to get there. It was a lot like a 40-minute basketball game—full of exciting runs, scoring droughts, much-needed time-outs, questionable calls, great execution and the constant support of great teammates.

My life is immensely better after coming out 12 years ago.

I spent so much time wishing I could feel normal or hoping that I would stop hating who I was. Many people who identify as LGBTQ+ have shared in those hopes, dangerous as they are. Some have hoped they were going through a phase, have ignored their identity, or actively repressed it to protect themselves. For a long time, I tried to do some of those things.

It has taken a long time to forgive myself for the pain I put myself through. I wish I could have been truthful with myself, my family, my friends and the world much earlier than I was able to, but the fact of the matter is that actually coming out is so much harder than wanting to be out. To expose yourself to the world in that way, to be open to unsolicited feedback from people you know and people you don’t, is terrifying.

A friend of mine in basketball reminds me often why it’s important for some of us to be out, and to be as out as we are. He and I agree that it is best summed up by a social media post by Chasten Buttigieg, husband of U.S Secretary of Transportation Pete Buttigieg, at the start of pride month in 2019: “The closet kills people, and it didn’t get you. That’s reason enough to march and celebrate your existence.” 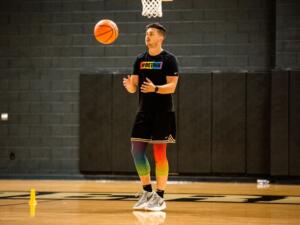 It’s hard to type that, so I hope it’s hard to read it. The fear of coming out is enough to convince some people that taking their own life is the safer choice. Coming out of the closet can be as lethal as staying in, and if you are in an unsafe environment, living that truth can be dangerous. In the South, LGBTQ+ youth are four times more likely than their heterosexual peers to attempt suicide before turning 18 (Source: The Trevor Project). Our community deserves more than that. We deserve better than that.

We deserve to celebrate our identities and what makes us us. We also deserve to feel like our love, our relationships, our families and our lives are equal … and normal. It takes a lot of courage, confidence and support to come out, and too few of us get to do that safely. Therefore, those of us who can do it safely have a responsibility to make it safer for others.

That’s a big reason why we use the word “pride” to celebrate the LGBTQ+ community. Pride started as a riot for LGBTQ+ rights but has transformed into a celebration of equality and, frankly, survival. If not for trailblazing Black and brown trans women deciding that enough discrimination was enough, who knows where our community would be. Many of them did not survive the fight, but they are why we continue to march and fight for equality.

We lost an entire generation of gay men due to medical and government negligence and discrimination and we have only recently have been afforded marriage equality. The fight is far from over, and we are proud to keep fighting.

I had a chance to watch the Nashville Pride parade from my apartment this weekend. With so much happening in our world, it was beautiful and moving to see people from all walks of life come together to celebrate. The LGBTQ+ community holds many stereotypes, but one was on full display this weekend in downtown Nashville: LOVE.

The love that our community gives and receives during Pride is what keeps us going. If more people led with love and with pride, we would all be better for it. Knowing that we have an uphill, societal battle for equality—legally and culturally—is daunting. Taking a weekend out of the year to dance in the street is so powerful and fulfilling. It gives me hope that more and more people will feel safe coming out, being honest and living their truth.

Afraid as I was, coming out of the closet was easy and peaceful for me. I was prepared for the worst but truly could not have had a more supportive and safe experience. My parents, both lifelong basketball coaches, were so kind and loving. That is, unfortunately, not the case for everyone, and I am so sorry about that. Ann and Lou DeMille are a great example of what it means to lead with love. As we say in Nashville, I love y’all. You have shown me how to be there for others who need the love you gave me.

Coming out to my friends took a little longer, and I did it over time. I never made a big announcement or published a big article or a video during that time when such things were in vogue in the sports world. I was approached about it, but in my mind, it didn’t make much sense. I had come out to so many people individually and just kept on living my life. I decided that, once the important people in my life knew my truth, I would live authentically and honestly.

In my mind, there was no need to broadcast my coming out—I could simply be myself and make it a normal part of who I am. I have done that, and I don’t have any regrets about that. My authenticity and my genuine openness about being gay have been powerful sources of confidence for me, and I hope they have been for others as well. It makes me a better leader, a better coach, a better mentor, a better friend and a better person. It has forced me to live with honesty and integrity, which are things our program holds in high esteem. I am proud of who I am and I have been fortunate to have a supportive family and friends.

Shea Ralph, though, is truly special. 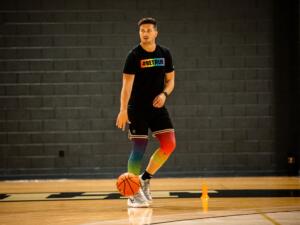 When she approached me about working with her at Vanderbilt, she wasted no time in expressing her desire to build a diverse and inclusive staff at the nation’s premier institution. My sexual orientation was not something for me to hide when I got to Vanderbilt, it was something she expressly wanted me to live out fully.

That’s a brave thing for her to ask! In a visible and public-facing role, not everyone will be comfortable with me being out and proud. But that’s okay! We have a responsibility, as educators, to show our students what the world looks like. There are gay people in the world. They are just like everyone else.

Visibility has proven to be a major change agent through history—for the civil rights movement, for women’s rights, for racial justice, for equal pay, for socioeconomic growth in general. When we, as a subculture, can see people who look like us or feel what we feel doing things that we dream about, we can begin to understand that it is safe for us to pursue those dreams.

That 10- or 11-year-old boy was always unsure if there was a place for him in basketball±—or in sports at all. I walked a long, hard road to get where I am as who I am, but I know I have had it easier than most. What I can do now is to make things easier for others.

I am out and proud as a gay man coaching a revenue sport at a Power Five school, the best one in the country, in the best conference in the country. I want other people in our community to know they can do the same thing (as long as they do the work!). I want to be it for others to see it, so they can be it too.

Until recently, I have always balked at the idea of being The Gay Coach. I didn’t want to be stereotyped or to check a box. I didn’t want that to define me. I won’t do that anymore.

Being gay is such a big part of who I am, but like all people, my identity is more complex than that. I am a pretty good coach, according to my colleagues and our student-athletes. I’m confident in my basketball ability. But I’m also confident in who I am, and being the truest version of myself only enhances my ability to do the job that coach Ralph hired me to do.

If me being “The Gay Coach” helps one more person feel confident coming out of the closet, sharing their truth with someone, or just knowing there is a place for them in sport, then sign me up. I will still be able to teach our players how to screen, when to cut, how to rotate in help defense and box out technique. It might even make me better at those things. It will certainly give me more capacity to love our players, and that’s the most important thing I do.

If you are ready to come out of the closet, you will always have love and support from Vanderbilt women’s basketball. There’s a whole community of people—at Vandy, in Nashville and nationally—who will love and support you for who you are. And if you’re not ready just yet, or it’s not safe for you to do so, know that we have your back. We will be here when you are ready.

November 23, 2021 The Pioneer Behind Shea Ralph