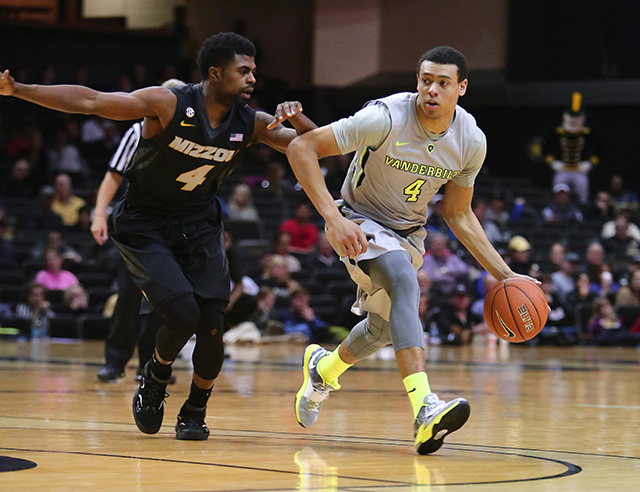 Vanderbilt freshman point guard Wade Baldwin IV shares a first name with his father. But he isn’t named after him.

When he was only 10 years old, Wade Baldwin III’s father, Wade Jr., died. At that time, Wade Baldwin III remembers telling his mother if he ever had a son, he would name him after his father. Thus, the youngest Wade is named after his grandfather.

So the old adage of what’s in a name carries a deeper meaning for Wade Baldwin III and he reminds his only son that he’s not just representing himself when he’s out on the basketball court or in the classroom.

“I was told at a young age by my father’s older brother, never to disrespect your last name,” Wade III said. “That was a name that was given to you. It wasn’t yours. I told Wade that wherever he goes, don’t ever disrespect your name.”

Respect, good moral character, hard work and diligence in the classroom were preached to Wade Baldwin IV at an early age. In fact, it was hard for Wade to get away with anything as his father was a senior special agent for the Drug Enforcement Administration and his mother, Monica, worked for the FBI.

“I had the rough basketball dad who really dug into me, coached me up a lot,” Wade said. “Then I had the mom who was nice, but she was still grinding and pounding, hitting me with I need to do well in school, do well in basketball as well. It was like I had two fathers and a mother. It was awesome. Awesome people. I wouldn’t trade them for the world.”

In December, Wade III retired and moved to Tampa after 27 years with the DEA as an undercover agent in narcotics that took him from New York to the Bahamas to Baltimore then back to New York. When Wade III lived in the Bahamas for six years, Wade IV would spend every July with his father, playing baseball and getting to join his father in a Coast Guard helicopter.

Monica has spent the last 26 years in the FBI. She supervises a squad who handles white-collared crimes such as mortgage fraud, healthcare fraud and government fraud. Before that she worked in recruiting agents, along with street crimes and teaching at the FBI Academy.

“She is absolutely the strongest woman I have ever come across by far,” said Wade IV, who broke the school’s freshman single-season assists record and was named to the All-SEC Freshman Team. “I think I get my toughness from her.”

Wade said because of his parents’ background, he learned organization, discipline and mental toughness. He also got a taste of the rigorous training they went through to even be qualified for their jobs.

Three summers ago, he went to the FBI National Academy Youth Leadership Program in Quantico, Va. Baldwin was one of two representatives from the state of New Jersey to be chosen for the nine-day program, which attracts national and international students. In order to be accepted, he had to complete an application, write an essay and provide high school transcripts in addition to completing an interview.

Wade and his peers were put through the gauntlet with 55 hours of classroom instruction regarding law enforcement and leadership skills, along with book reports and team-building exercises. He also got a literal eye opener with a 5 a.m. wake-up call every morning that jumped right into a demanding physical fitness program.

This was the condensed version as his parents went through nine months of basic training.

“I got a little feel of what it is like to become an agent,” Wade said. “It really inspired me and it was shocking how my mom, especially — I knew my dad had the toughness to go through it — but I just really learned a lot about my mom and the toughness she had to go through as a strong woman, going through that type of training.”

At the end of the program, each student runs through the Yellow Brick Road–a Marine Corps obstacle course and run. Wade finished first in his class of 50 and was awarded the coveted Yellow Brick.

Wade said he was the only athlete in the program. He was out of his comfort zone, and loved it.

“It was great. There was not a single athlete,” he said. “I met kids who drove tractor trailers to school, kids from Hawaii, who only go to school for three hours. I had a very limited connection with any of them. By the time we all graduated from the program… I still keep in contact with people. It was a good network. Basketball meant nothing for them. Meant nothing for me at that time. Shook down to what type of kid I am and what kind of kids they are.”

Whether Wade follows in his parents’ footsteps remains to be seen.

In high school, he thought wanted to become a college athletic director. Now he is eying an economics major and isn’t counting law enforcement.

“What the FBI is really looking for now isn’t really a criminal justice major, more people who have work experience, computer science, speak different languages,” he said. “Not typically what an average person would think to be in the FBI.”

But he does want to do his best to make his parents proud. And at just 18 years in, he has already done that.

“You do your best to raise a child with good moral character, gets good grades and achieves the most he can in life,” Monica Baldwin said. “It is safe to say, Wade did that in basketball and also in school during high school. As a young man, he made some very smart, mature decisions. Whether the law enforcement aspect played into that or whether it was the way he was raised, I’m not going to credit either one but I’m sure it is a combination of both.”