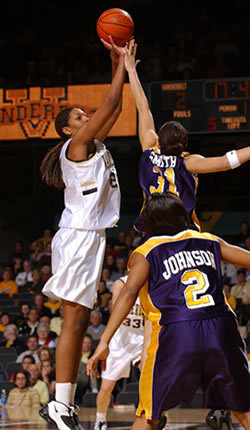 Vanderbilt is planning a special Hall of Fame weekend for September 12-13. A series of events will unfold over those two days, capped by the Induction Banquet Friday evening, September 12 and the Class of 2008 being presented at halftime of Saturday’s Rice football game. VUcommodores.com will spotlight one inductee per day leading up to the Hall of Fame weekend.

To say Chantelle Anderson was surprised to learn she would be included in the inaugural 12-member class of the Vanderbilt Athletics Hall of Fame would be an understatement.

Having graduated from Vanderbilt with a degree in human and organizational development just five years ago, it is easy to see why the former Vanderbilt women’s basketball star was so surprised.

“I was surprised because I just graduated,” Anderson said. “It happened so fast and there are so many great names. To be in a group with people like Dan McGugin, who has the athletic building named after him and Ryan Tolbert, who has the Tolbert Cup named after her, is such a great honor.”

A native of Vancouver, Wash., Anderson is currently living in Atlanta, where she is rehabbing from a knee injury that cost her the 2008 season with the WNBA’s Atlanta Dream.

Although Anderson would much rather be on the court than going through rehab, the injury has afforded her the opportunity to return to Vanderbilt for Hall of Fame Weekend (Sept. 12-13). Had she been healthy, Anderson would have been wrapping up the season and wouldn’t have been able to make it to Nashville.

While at Vanderbilt, Anderson scored more points (2,604) than any player in school history, was a three-time All-American (2001-03), a three-time first team All-SEC selection and was the SEC Player of the Year in 2002.

Just 27, Anderson is far and away the youngest member of the inaugural class. Because of her youth, Anderson’s selection to the hall of fame has given her an even greater appreciation for how she is viewed at Vanderbilt.

“Anything that includes a hall of fame is a big accomplishment,” Anderson said. “Vanderbilt is such a great university and has a tradition in many sports, so to be one of the first 12 and to be the youngest one says a lot about what I did at Vanderbilt and how people viewed me.”

Even with all of the awards she has won throughout her career, the title “Hall of Famer” never appeared on her resume. That will change on Sept. 12 when she is enshrined into the Vanderbilt Athletics Hall of Fame.

“I’m so excited and honored. Everything has been a surprise to me and I’m really looking forward to the weekend.”