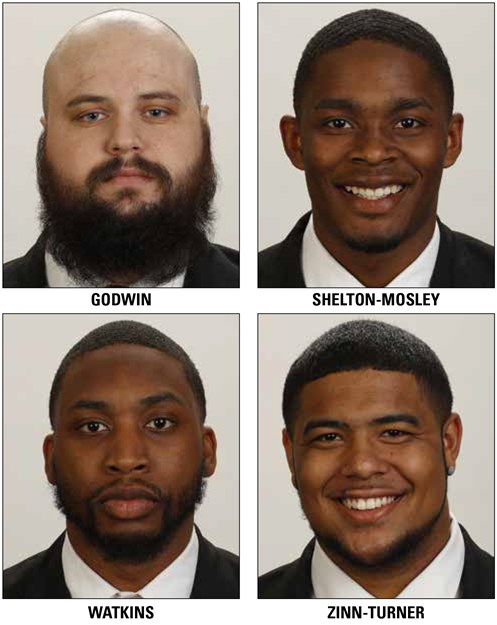 They are joined by quarterback Riley Neal as graduate students preparing for their first season in a Commodore uniform. Neal participated in spring practice after enrolling as a Vanderbilt graduate student in January.

“These young men bring a lot of ability and experience to our program. They will make us a more talented and deeper football team entering the season,” Mason said. “We saw last year how experienced, proven men like Louis (Vecchio), Parker (Thome) and Alim (Muhammad) can help our team. I look forward to these men having the same impact.”

Watkins, a native of Nashville, starred at Pearl-Cohn High School alongside Commodore running back Ke’Shawn Vaughn, who dazzled Vanderbilt fans in 2018 by rushing for 1,244 rushing yards and 12 touchdowns in his first year as a Commodore. Watkins and Vaughn also were teammates at Illinois in 2015-16.

Watkins played in 31 games for Illinois during the past three seasons, contributing 98 tackles, nine passes defended and a forced fumble. He earned 16 career starts at cornerback for the Illini. At Pearl-Cohn, he was a standout football and track performer, earning all-state and all-metro honors in 2014.

Shelton-Mosley, a product of Sacramento, California, graduated from Harvard this spring following a stellar collegiate career as a versatile receiver and return specialist. He arrives on West End as an FCS All-American and All-Ivy League recipient who earned the conference’s rookie of the year award in 2015.

As a prep athlete in Northern California, Shelton-Mosley was a three-sport standout and team captain at Capital Christian High School. He earned all-state honors in 2014, and holds school records for touchdowns in a season (37) and career (88).

Godwin, a native of Dothan, Alabama, spent the 2017-18 seasons at South Alabama. A second-team Academic All-American in 2018, Godwin played in 12 games on the offensive line last year for the Jaguars, earning six starts at right guard.

He was a prep standout at Providence Christian High School in southeast Alabama, helping his team to a pair of state playoff appearances.

Zinn-Turner, a native of Canton, Ohio, played the last three years at Marist in upstate New York. He was a two-time all-conference interior defensive lineman at Marist, registering 6.5 quarterback sacks and 11 tackles for loss among more than 130 tackles.

Zinn-Turner was a three-sport prep star at Malvern High School. He was named team MVP in 2014.

The Commodores open the 2019 season Aug. 31 by playing host to SEC East foe Georgia. Kickoff for the opener is 6:30 p.m.

Vanderbilt kept 2019 season tickets at the same rates as a year ago. Season ticket packages for the Commodores’ seven-game home schedule start at only $308 for premium sideline seats and $178 for reserve end zone sections of Vanderbilt Stadium.