NASHVILLE, Tenn. — Jim Foster’s career in women’s basketball is a story that unfolds on a grand scale. It is a sweeping epic of dynasties and legends.

His legacy is better measured on a human scale. To those who played for him, he isn’t the figure who had a hand in building dynasties. He isn’t even the coach who helped them win a lot of games. Not entirely. At his core, Foster is the mentor who helped them grow as people.

Foster certainly helped shape basketball superpowers. As head coach at Saint Joseph’s University more than 40 years ago, he mentored Geno Auriemma and Muffet McGraw. Of the eight Division I women’s basketball coaches who won at least 900 games, three sat on those Saint Joseph’s benches in the late 1970s and early 1980s, Auriemma before he went on to fame at the University of Connecticut and later McGraw before decades of success at Notre Dame.

Foster even dared take on the mighty Pat Summitt, seeing potential greatness at Vanderbilt despite proximity to a University of Tennessee program that held an entire sport in its thrall.

Vanderbilt put down roots of basketball success under Phil Lee, but Foster set the enduring standards of excellence. He led the Commodores to their first Elite Eight in his first season, beating Auriemma along the way. The next year brought a trip to the Final Four—after a regular season game against Tennessee that saw Memorial Gymnasium become the center of the basketball universe. Hours ahead of tip, fans lined up by the thousands to ensure they wouldn’t miss the spectacle. Legend has it that even Chancellor Joe B. Wyatt couldn’t find a ticket.

“All the anticipation was tangible–the excitement was tangible,” former All-American Heidi Gillingham recalled in recent years of taking the court that day. “I’ve never experienced anything again like that, and don’t really expect to in my life. It was hard, hard work that got us there, great coaching and it was magical. The moment. I remember thinking ‘This is what the guys experience. We have arrived in this moment.’ ”

Vanderbilt remained near the top of the sport throughout Foster’s time in Nashville, reaching at least a regional final in five of his 12 seasons and regularly drawing some of the biggest crowds in the country to Memorial.

Playing for Foster was not easy. Practice started at 6 a.m. most mornings, student-athletes lacing up the black high-top sneakers the coach called their “work boots.” A military veteran who served two tours of duty in Vietnam, he was strict, demanding and unfailingly blunt.

“Fun might be a stretch,” said Rhonda Blades Brown, a freshman on Foster’s first team who went on to play in the WNBA and now teaches and coaches at Brentwood Academy. “Worth it? Yeah, I would say it was worth it. Ask any of the players on teams that are good every year. Sustained excellence is difficult, and there is a price. When we won the SEC Tournament, when we got to play in the Final Four? Gosh, I wouldn’t trade those experiences for anything.”

And as intense as Foster was about basketball and seeing players make the most of their potential on the court, what happened there wasn’t his only concern. Whether talking about events in the news or welcoming Henry Davenport, a passionate fan who had a developmental disability, into the women’s basketball family, Foster stressed a world beyond wins and losses. 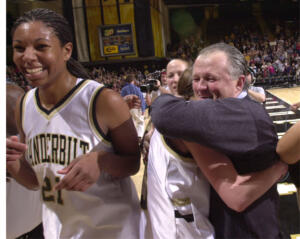 “I think he just wanted us to understand that this is a piece of life,” Brown said. “But you can use it to help you in life and push through some hard things. It was about appreciating all that was out there and helping us become great people, not just great basketball players.”

That message was as constant as the black sweaters he wore.

“We knew that he loved us and cared for us,” said Candice Lee, vice chancellor for athletics and university affairs and athletic director. “He was always trotting us off to watch some film or hear some speaker. As an adult, I just greatly appreciate what he exposed us to.”

You can’t write the history of women’s basketball without Foster. From mentoring Auriemma and McGraw to battling Summitt and designing defenses to contend with the likes of Sheryl Swoopes, he experienced all that the heights of the sport have to offer.

And yet none of it changed the reason he coached. He won enough to shape the sport. Shaping people always meant more.

“That’s an interesting time [in life] to be locked into,” Foster said before he retired. “I see a lot of change, a lot of growth and a lot of understanding about things. They come in wide eyed at 18 and are a heck of lot different, generally speaking, when they walk out at 22.”