Enna Pehadzic's Example to Others

Sometimes strength is knowing that you aren’t alone.

Growing up in Denmark, Enna Pehadzic loved basketball. That passion set her apart in a country with a rich soccer culture. It set her apart even in her own family, with a dad and sister who played competitive soccer. None of that deterred her.

It didn’t matter that her sport wasn’t particularly popular in the Scandinavian country. All she needed was a ball and hoop. Even the hoop was optional. 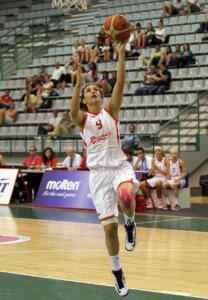 It didn’t matter that too few girls played basketball in Horsens, her hometown about 150 miles west of Copenhagen, to field a competitive team. She joined boys’ teams instead.

It didn’t matter because she knew she wasn’t alone. She turned on her computer and immersed herself in highlights of American women’s basketball stars—no one more often than Skylar Diggins-Smith. Born and raised in South Bend, Indiana, the former Notre Dame guard led a very different life. But in the charismatic star, a Danish teenager saw someone like her.

“At some point you get tired of looking at boys,” Pehadzic said. “And you want to look at some female role models.”

Now she believes it’s her turn to be the role model—even if it is a role she never envisioned and is still trying to understand. In May, the 24-year-old Pehadzic was diagnosed with essential thrombocytosis, a blood disease that rarely affects someone so young.

Time and again, basketball spurred Pehadzic to move beyond her comfort zone: leaving home as a teenager to play in Italy, crossing an ocean to attend the University of South Florida, and arriving at Vanderbilt as a graduate transfer in the middle of a pandemic. No matter how unfamiliar the food or accents around her, basketball gave her a community. And along the way, the sport empowered her to believe she can build one.

She wants to share her story, the story of her athletic and medical journeys—just in case it reaches someone else out there who’s like her.

“If I didn’t have those examples, at least I can be the first one to do it,” Pehadzic said. “I realized how important it is. I realized there are all these small communities where people are helping each other, and they’re leaning on each other and sharing their own experiences.”

Pehadzic was still in high school when she first followed basketball into the unknown. As a teenager, having been spotted at a tournament playing for a Danish boys’ team and identified as a promising talent, she spent nearly a year living apart from her family and training with an established girls’ program in Italy. Devoting herself to the sport seemed at first like a dream come true. But the isolation of distance and the language barrier was wearing, and she eventually returned home to complete high school among her friends and family.

More mature for the experience, and more comfortable with a second language she already spoke, she found what appeared a better fit with the opportunity to play basketball and study at the University of South Florida. It still wasn’t easy. She redshirted her first season because of a knee injury, then she reinjured the knee and missed most of the subsequent season. It wasn’t until her third try, the 2018–19 season, that she emerged as a starter.

Despite the injuries, she never thought about returning home. She enjoyed her studies and made connections in the academic community. She found people with shared interests and experiences. Even through the moments of isolation that injured athletes endure, she felt part of something. She was emboldened to stay and prove herself on the court.

“You start from zero and you build up,” Pehadzic said. “I learned so much about myself going through all those injuries and challenging myself to climb over the obstacles. If someone asked if I would change anything, I really wouldn’t. It gave me the opportunity to see and understand things from a different perspective.” 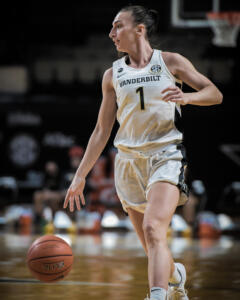 Coming to Vanderbilt was the next challenge to take on—an opportunity to test herself against the best of the best in the Southeastern Conference. The pandemic altered that. She started seven games this past season, but when student-athletes reached their decision to discontinue the season in January, Pehadzic underwent a surgical procedure on her troublesome knee.

Little did she know the latest challenge was just beginning.

She woke up with chest pain about a week after her surgery, a Sunday morning. She assumed she had merely tweaked a muscle by sleeping in an awkward position and went about her day. But in the predawn hours Monday, she awoke in even greater distress.

“Every time I tried to breathe it was like someone was trying to stab me,” she said.

A trip to the emergency room revealed blood clots in her lung, as well as a high platelet count and enlarged spleen. Subsequent testing in the weeks that followed confirmed essential thrombocytosis, or ET, a blood cancer resulting from gene mutation that causes a person’s bone marrow to produce too many platelets—the blood cells that normally clump together to stop bleeding. Those platelets can lead to, among other things, inflammation and blood clots.

ET is one of several myeloproliferative neoplasms (MPNs), a family of blood cancers, and it most often affects people 60 or older. Estimating the precise frequency of ET in people as young as Pehadzic is difficult—the gene mutation at play was discovered only in 2005. But cases like hers are rare.

Dr. Nicole Kucine of Weill Cornell Medicine in New York often helps patients and their families separate the word “cancer” from dire connotations of chemotherapy and life expectancies. ET is consequential and life-altering—but in different ways. While it can in some instances progress to leukemia, such worst-case scenarios are very rarely seen in young patients.

“I don’t think it’s super helpful to think of it as cancer because that puts you in a very stressful mindset,” said Kucine, an expert who specializes in MPNs in pediatric patients, of her message to families. “I think of it as a chronic bone marrow disorder. It’s a chronic disease that you’ll live with, you’ll need some monitoring, you might need medication—and there can be complications associated with it. But I really try and think of it as a longevity thing.”

Yet for someone like Pehadzic, shifting from short-term fear to long-term planning makes the experience no less isolating. Not because of any lack of support from friends, classmates, teammates or family—her sister and mother navigated the pandemic protocols to travel from Denmark to the U.S. in January and have remained ever since. But isolating because

“The only people I could find were people who are 60 and 70 years old,” Pehadzic said. “It just wasn’t relatable or encouraging.” 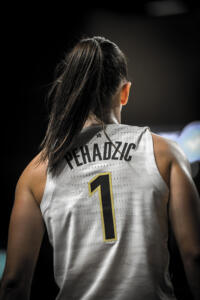 The rehab for her lungs, weakened by the clots and treatment, was another source of frustration. Pehadzic never shied away from tough coaching as a young basketball player. She liked it when someone challenged her and responded when pushed to improve. So when she felt light-headed during one particularly aggressive rehab session, she didn’t want to back off. She wanted to complete it, but her body gave her no choice.

“I felt so embarrassed,” Pehadzic said. “I’m an athlete, I should be able to do these things. But I just couldn’t.”

Pehadzic still aspires to play professional basketball in Europe after completing her master’s in medicine, health and society, with an eye toward a future career as a sports psychologist. She said her hematologist believes the medicine needed to treat her ET shouldn’t prevent her from resuming full-scale basketball activities.

Meanwhile, when her morning workouts are done, she continues researching ET and learning about advocacy groups like the MPN Research Foundation, which was able to provide her with news about how Danish doctors are contributing to advancing research.

It is, for the first time, a world in which basketball can’t provide the community she seeks. But her sport taught her to adapt and thrive in unfamiliar surroundings. It gave her role models. And it prepared her to be one.

If she isn’t just like someone else, maybe she can help someone in the future be just like her.