East Emerges Out of West End

He chased scholarship offers that almost never came, an NFL dream that sometimes seemed unattainable and the chance to inspire others.

Through all of the trials and tribulations, the former Vanderbilt long snapper (2010-14) never lost faith.

In high school, East wanted to play college football as a linebacker. He spent the summer going into his senior year attending different college camps hoping to receive a scholarship offer.

After hearing about Vanderbilt from his high school academic counselor, East decided to attend the Commodores’ camp.

At the camp, he ran his 40-yard dash in 4.72 seconds. Chasing that scholarship that he was there for, East asked for another chance to run faster.

After pleading with the coaches to let him have another chance, East ran his next attempt below 4.7 seconds. East believes he meshed well with the Vanderbilt coaches by showing his grit and confidence.

Still, no offer came that summer.

At the end of his senior season, with no Football Bowl Subdivision offers on signing day, East was set on playing at Wheaton College, a Division III program in Illinois. East planned to play there with his brother, JD, who he is very close to.

But just before graduation, former Vanderbilt head coach Bobby Johnson called and offered East a scholarship to Vanderbilt. The circumstances were staggering. 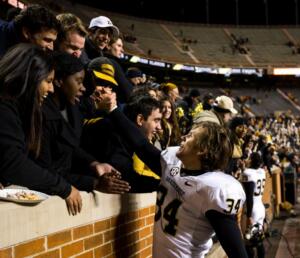 Due to the death of one of Vanderbilt’s top recruits Rajaan Bennett, East was offered at the last minute to play linebacker and long snapper.

“I had mixed emotions because on one hand here is a scholarship in the Southeastern Conference but on the other hand these are tragic circumstances,” East said.

Eventually, East decided to take the scholarship offer and honor Bennett with his hard work and play on the field. He then found his way to the field quickly.

Luckily for East, he grew up playing the position. His father, Guy East, was a linebacker and long snapper at Purdue and taught his sons how to snap.

While Giller was injured, East received a lot of practice reps at the position. A year later, East became the full-time starting long snapper as a redshirt freshman. Revered by his teammates, he became a captain his final two seasons.

When East looks back at his time on West End, he will also always think about how he met his wife, Shawn Johnson. Johnson is a former gymnast who won a gold medal at the 2008 Summer Olympics in Beijing.

After the Olympic games, she won an ESPY award for Best US Female Olympian. In that same year, she also won season eight of Dancing with the Stars.

“There was an article that came out that said, ‘Shawn Johnson is looking at going to school at Vanderbilt,’ and my roommate said he wanted to date her,” East said. “My brother was an Olympic cyclist and met her at a cycling race in 2012 and gave her my number. I created my first ever social media account to tweet at her and she responded. She eventually came (to Vanderbilt) 2013 and we connected.”

East and Johnson dated while East attended Vandy and the two and got engaged in July 2015 at Wrigley Field in Chicago. In that same year, East stayed focused on chasing his NFL dream. He signed with the Kansas City Chiefs after the NFL draft. 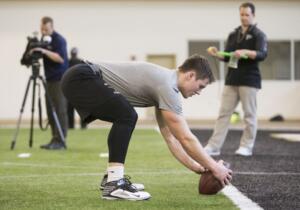 After going through training camp, East was released.

“When I got cut by the Chiefs, I signed up to be an Uber driver and I did not know what I was going to do with my life,” East said.

In that time, the couple created a YouTube channel to show how their wedding planning process was going. That channel ended up featuring much more.

“Fortunately, I was either getting tryouts from teams or Shawn was doing events like red carpets at the Oscars,” East said.

Although Johnson was already famous in her own right, the videos went viral and the couple became stars all over social media. Today, The East Family is one of the most recognizable names on social media.

“For a while we were doing it just to have something to do because I didn’t have a job. But then we put out a couple videos where people started commenting very vulnerable and personal things not knowing anyone else was going through the same things as them,” East said. “Our whole mission now is to help families become more connected and to be more hopeful.”

One of the most inspirational video series that The East Family has put out is when Andrew finally got the call to play for the Washington Football Team in December 2018. Four seasons after he was initially waived by the Chiefs, East finally received his opportunity.

“When that all happened, I couldn’t help but think back on all the events that took place to help me get there. My 40-yard dash at that Vanderbilt camp set me up for a scholarship opportunity which set me up to get an NFL opportunity,” East said. “It is a cool realization.” 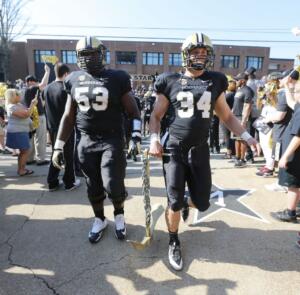 East’s dedication to live out his childhood dream is an example of how faith and determination can make any dream happen. There is no way East thinks he could ever have made it without the closest people to him.

“It was cool to see how little of my success could be attributed to me,” East said. “I remember Shawn, my family and some of my friends were there. I looked into the stands and saw that these people sacrificed so much for me to chase this dream of mine.”

Today, The East Family is still focused on creating content.

The YouTube videos are getting as much attention as ever. They stay up to date on social media posting pictures and videos from their lives.

“We now share a whole range of different types of content from cringey comedy to really personal stories and the whole reason is to put a smile on someone’s face,” East said.

East also has his own podcast called Redirected which focuses on the different directions that life has taken him and other celebrities.

No matter how the past looks, East is always looking ahead.

“My faith has taught me that was just a chapter,” East said. “There’s always something next.”

November 12, 2020 Henry-Brooks Continues to Play Big for the Commodores