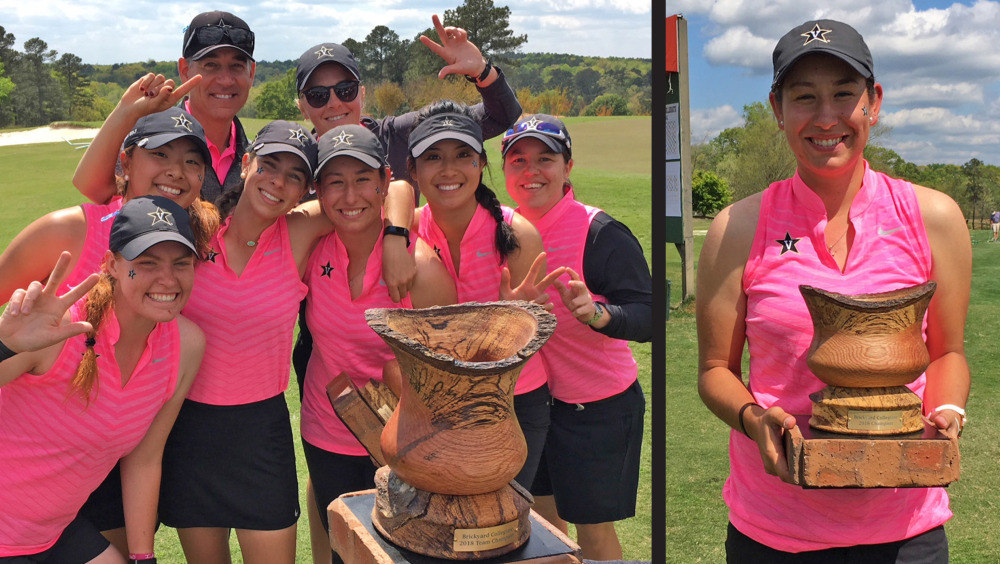 MACON, Ga. – The Vanderbilt women’s squad captured their first team victory of the year in resounding fashion, winning by a double-digit margin to take the Brickyard Collegiate Tuesday in Georgia.

Commodore freshman Morgan Baxendale matched the team accomplishment by claiming medalist honors as the low individual in the 78-player field. Baxendale, from Orlando, Fla., finished with the three-day total of one-under par 213, two strokes better than the closest competitor.

The Commodores’ dominated the tournament Tuesday by registering a team score of two-over par 290, the lowest total of the final round. Vanderbilt posted a 54-hole total of 869, 10 strokes in front of runner-up Old Dominion.

The impressive win was exactly what Vanderbilt head coach Greg Allen wanted to see from his Commodore squad in their final prep before the Southeastern Conference Championships.

“I’m so dang proud of this team. It’s been a while [since winning a tournament] and this feels really good. This is a great shot of confidence before heading to SECs next week,” Allen said. “We talked a little bit yesterday before leaving the course about the opportunity in front of us and what we needed to do. Today, it was all sticking to the game plan and trusting the process. For the most part, we did that.

“There was a couple of holes where we lost some focus, but Burger [assistant coach Emilie Meason] did a wonderful job of bringing them back. Mo [Baxendale] and Abbey [Carlson] were solid today with under-par rounds, and I’m so happy for Mo. That girl works extremely hard and it’s good to see that work pay off,” Allen said.

The Commodores, ranked No. 24 nationally by Golfweek, captured their first team title since the 2015 Las Vegas Collegiate Showdown.

Baxendale was sensational in her first collegiate win. Holding a two-stroke advantage entering the day, Baxendale’s round featured a birdie on No. 10 and 17 pars, including a superb up-and-down on the difficult par-4 15th.

“Honestly I can’t believe it happened. It just shows that hard work can really pay off. I’m more happy that it also was a team win – that’s definitely an added bonus,” Baxendale said. “I’m so thankful that Coach Allen kept me really patient on the course. I just stayed patient, trying to hit greens and two-putt.”

Carlson, from Lake Mary, Fla., might have fashioned the Commodores’ best round of the day, garnering three birdies and a lone bogey for a two-under 70. It was Carlson’s lowest round of the tournament.

Yu, from Duluth, Ga., was in contention for medalist honors all three rounds. On Tuesday, she carded a three-over par round of 75.

Virginia Green of Fairhope, Ala., responded well after a disappointing second round. The team’s third contributing freshman rallied late with birdies at No. 16 and No. 17 to post a two-over par 74.

Junior Courtney Zeng from Orlando started with a near-ace on the par-three second hole, but could not keep the hot touch through the round. She finished with a 76.

The Commodores return to competition at the SEC Championships, scheduled to start April 18 at Greystone Golf & Country Club in Birmingham.