NASHVILLE, Tenn. — When the COVID-19 pandemic sent many Vanderbilt student-athletes back to their respective hometowns earlier this year, Daveion Davis found himself with not much else to do but study and work out.

So when he had completed his course work and online summer courses as a rising Vanderbilt sophomore, he would physically train 2-3 times a day. He suddenly went from 307 pounds to the 285 he weighs today.

That’s lean enough for him to maybe line up at defensive end one day.

“Oh, I would love that,” Davis laughed.

But Vanderbilt continues to need Davis in the middle of its defense at the nose tackle spot. That’s a position he has played at a high level since enrolling in January of 2019.

The next time the Commodores take the field, Davis will be playing in his 15th career game.

“That was probably the best help for me, being able to enroll early and get after things and get after certain drills and take each day as an opportunity to continue to grow and get better and kind of mature as fast as I can,” Davis said.

Davis’ five tackles this season has upped his career total to 19. That goes along with 1.5 tackles for loss, 0.5 sacks, two quarterback hurries and a forced fumble.

Not bad for a young man many programs considered too short to produce at an SEC-level of competition.

“I was being recruited by everybody, but they would never give that offer because they may have had a guy an inch or two taller than me with maybe three inches longer wingspan,” Davis said. “I took it with a grain of salt and just kept working. 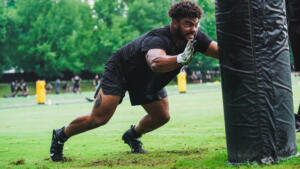 A native of Huntsville, Alabama, who attended James Clemens High School in Madison, Alabama, Davis turned plenty of heads on the field during his prep days. He was a 7A Lineman of the Year finalist, an all-state selection and participant in the 2018 Alabama-Mississippi Game all while making 250 career tackles.

But off the field, a string of unexpected deaths began to have a profound impact on his future. His great-grandfather Ed Jones died in November of 2018. Two weeks later a close cousin was involved in a fatal car crash.

Not long after that, a close uncle passed away. The wife of that uncle lived just one week longer.

By the time December rolled around, Vanderbilt told Davis he was more than welcome to reschedule an official recruiting visit. Davis opted to come to Nashville anyway for a bit of a mental break.

“It made me love the people around me 10 times more. You can’t take anything for granted,” Davis said of that period of his life. “Everything is an opportunity, whether it’s to tell somebody you love them or maybe to try to work on yourself and what you’ve got going on. It definitely helped me realize that everything is sacred.”

Davis is a medicine, health and society major and has aspirations to go into the medical field upon graduation. He points to his mother, Amanda Davis, as being a guiding force and major influence on his own successes.

Davis remembers being picked up from school or daycare with his older brother Dylan Davis and helping mother Amanda work overtime at her nurse practitioner job by filing charts alphabetically.

As for older brother Dylan, he was the one to constantly push his little brother to be better and to compete at nearly everything.

Now, with still more than 2 1/2 seasons left in his Vandy career, Davis is using that competitive spirit in the classroom and on the grass to better himself and his teammates. The biggest thing he wants out of his career is to help turn the Commodores into winners.

“The goal, no matter what has happened in the past three games (this season), is to continue to build each day in practice, perfect the craft in practice each day as much as you can, take every rep as serious as possible and at the end, on Saturday, cash that check in at the bank and be 1-0,” Davis said. “Leaving West End I want to leave it as a winning program. I want everybody to know that the work was put in, the work always has been put in and there’s no surprises when we start winning.