NASHVILLE, Tenn. — In many ways, there would be no Vanderbilt lacrosse program without Lyle Davis.

She doesn’t like to take much credit for that fact. But it is fact nonetheless.

“I think it is important to recognize that it is not just one person,” Davis insisted. “It’s less about pride about one program and more about getting girls involved in sports at a high level. That is probably the biggest part of the objective that most of us have in remaining connected to the sport.”

A Mississippi native, Davis began playing lacrosse as a high school student in Virginia. She arrived as a freshman at Vanderbilt in the fall of 1990 and quickly found a community of lacrosse players – both male and female – competing as Commodores at the club level.

Davis, née Hull, became close friends with teammate Carrie Lochmiller and the two began to discuss the idea of Vanderbilt lacrosse becoming a Division I program. By 1992 the lacrosse team was traveling for road games and by 1994 had found a volunteer coach in Wendy Stevens, a former U.S. National Team member who just happened to be jogging by a practice one day.

“(Lochmiller) and I kind of worked together to draft a proposal and bring it to the athletic department and say, ‘Hey, we have a talented group of people, we draw a unique crowd for an SEC school and we draw a lot of kids from the Northeast and from the mid-Atlantic who have exposure to this,’ ” Davis said. “By junior year we got pretty serious about pursuing this and began to look into all the NCAA requirements.” 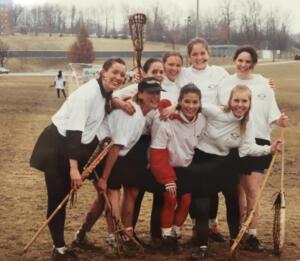 Fate also began to favor Davis and the Dores.

Leigh Ernst Friestedt was in law school at Vanderbilt and her younger brother was on the men’s club lacrosse team. Ernst was specializing in studying Title IX and took a special interest in the lacrosse team’s efforts to earn Division I status.

While Ernst worked behind the scenes, Vanderbilt began to up its competition. Davis and her teammates went up against Georgia Tech, Purdue, Indiana, Dayton, Duke and North Carolina, among others, and finished with a 9-1 record in the 1993-94 season.

“Our job was essentially to make sure that we had robust competition to show that we were actually worthy of that competition,” Davis said. “We had a pretty broad net and pretty decent competition for club programming.”

When Davis graduated from Vanderbilt in 1994 she had helped set the foundation for the future of Vanderbilt lacrosse. While she went on to enroll in graduate school at Northwestern, Vandy’s first official lacrosse team made its debut in 1996 under the direction of Stevens.

More than 25 years later Vanderbilt has put together 11 winning seasons and played in nine NCAA Tournament matches while becoming a consistent winner in the American Athletic Conference.

Davis, meanwhile, found herself coaching youth lacrosse during her time as a resident in Illinois and continued to do so when her and her family moved to Memphis. She soon found that while lacrosse was a relatively new sport in the state and the region, the interest was high from young girls looking for a competitive activity.

Because of her proximity to Nashville, Davis and her husband Ted Davis soon became more involved in the development of Vanderbilt lacrosse and eventually created the Lyle and Ted Davis Family Immersion Endowment scholarship which is awarded to a student-athlete who is pursuing academic research during the summer semester across any of the university’s programs or schools in order to fulfill their Immersion Vanderbilt requirement. The Davises wish to ensure student-athletes have the financial support to pursue their research passions thus enhancing their future career goals. 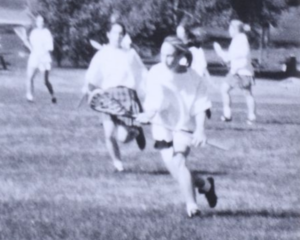 In recent years, Lyle Davis has been a featured speaker in Vandy lacrosse’s career week. Her efforts in continuing to connect Vandy lacrosse alumni has been vital for the growth of the Commodores.

On April 9, Davis will be awarded the Super Fan Award by the Vanderbilt lacrosse program.

“I’m so humbled,” Davis said of the honor. “But I’m one person doing the work that a lot of people are doing just to make sure that we take care of our girls and give them some options out there.

“The takeaway for me is just making sure that the younger generations have opportunities – and that they’re encouraged. Just showing girls that there are lots of different things that they can excel in and it’s fun. It’s hard work and there are sacrifices, but it’s fun and it makes you a better human being.”

Davis added the commitment by Vanderbilt head coach Beth Hewitt and Vanderbilt director of operations Lisa Gracey has been vital in growing the program’s alumni base and regional network. Their commitment to not only furthering the game, but expanding the reach of Vandy lacrosse, has been relentless.

Because of those factors, Davis said, young women across the state and the region continue to have the opportunity to succeed.

“What makes Vanderbilt lacrosse so special, especially recently, is this incredible bond that allows current and former players to lead future generations to support each other and grow the sport beyond conventional geographic and socio-economic communities,” Davis said. “Over the last 30 years, I knew we had to live by example in showing young women how many amazing doors athletics opens.

“Our role in giving back is to demonstrate how strong bonds that build great teams support women in so many other arenas. I love that Vanderbilt’s lacrosse program has a dominant presence in a region that continues to develop young, talented players. More importantly, however, I love that it is a place that alumnae can point to and say, ‘Hey, look at them — brilliant female leaders who are not only thriving in making a huge impact on the field, but also in our communities and in our world.’ ”