ADDISON, Ill. — Vanderbilt’s Mabel Cummins has advanced to the semifinal round of the Intercollegiate Singles Championship after defeating Brystal Beyer of Stephen F. Austin, 628-608, on Wednesday in quarterfinal action.

Cummins, an NTCA All-American, will face NCAA Division I Player of the Year Olivia Farwell of Duquesne in the Saturday semifinals which will be streamed live on BowlTV.com. CBS Sports Network will also provide coverage of the event. 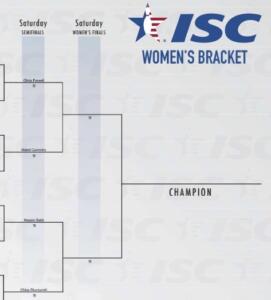 The Commodores’ other entry in thie 24-woman field, determined by qualifying at four sectional sites last month, was Amanda Naujokas, who lost in the round of 16 to Rebecca Hagerman of McKendree, 627-552. Naujokas had beaten Wisconsin-Whitewater’s Caitlin Mertins, 601-489, in opening round competition.

The Intercollegiate Singles and Team Championships bring together collegians from both the NCAA ranks and the USBC (non-NCAA) to crown national champions. The event began in 1975, decades before the NCAA began sponsoring bowling and produces some interesting and often unique matches.

Naujokas and Cummins qualified second and third, respectively, at the Smyrna Sectional in a field of 171 hopefuls. The top six qualifiers at each site advanced to the Stardust Bowl in this Chicago suburb.

Kierra Saldi of Duquesne will meet SFA’s Chloe Skurzynski in the other semifinal.

Vanderbilt bowlers have had success at this event, which is held after the NCAA Championship. Brittni Hamilton won the championship in 2011 while Robyn Renslow (2016) and Jordan Newham (2019) were runners-up. Kristin Quah reached the semifinals in 2018.

Live scoring for the 2022 event can be found HERE.