NASHVILLE, Tenn. — Tuesday was like any other day out on the golf course. That’s how John Augenstein tried to treat it, anyway.

Augenstein, one of five amateurs to be playing in the 120th U.S. Open beginning Thursday in Mamaroneck, New York, was grouped with Tiger Woods and fellow Kentuckian Justin Thomas during a practice round Tuesday.

Getting the opportunity to walk Winged foot Golf Course with Woods, was one of the game’s greatest to ever play, was certainly a once-in-a-lifetime memory for Augenstein no matter how much he tried to downplay the moment.

“Growing up I was obsessed with watching him and he’s such an influence on everybody, including my generation and even the golfers that are a little bit older than me,” Augenstein said. “He was everything. He was the excitement for most kids growing up watching golf and playing golf.

“It was awesome and it really was a dream come true to play with him, pick his brain a little bit. But we were all just kind of doing our work out there and trying to get prepared for the week.” 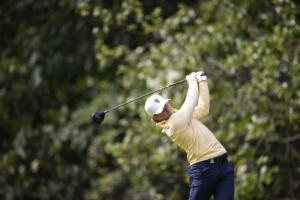 The 2020 SEC Player of the Year and 2017 SEC Freshman of the Year, Augenstein is one of three Commodores in the field this week. He joins professionals Matthias Schwab and Brandt Snedeker in the field of 156.

Vanderbilt head coach Scott Limbaugh is also on site to take in what should be an historic weekend for golf – and for his program.

“Having the opportunity to have those guys here and hang out with them has been really cool on such an outstanding, difficult, U.S. Open golf course,” Limbaugh said.

Augenstein will step into the tee box at 6:23 a.m. with major winners Jimmy Walker and Martin Kaymer. At 12:38 p.m., Snedeker, Xander Schauffele, Billy Horschel will tee off while Schwab is scheduled to begin his round at 1 p.m. with Cole Hammer and Alex Noren.

They’ll all have their work cut out for them on what Limbaugh sees as a very difficult course.

“I think the players that learn how to handle adversity the best and have the mental toughness to overcome a bad shot or a bad break and are just accepting of bogeys, I think those are the players that are going to have the most success this week,” he said. “It’s going to be tough.”

As for Augenstein, the U.S. Open presents the start of what he called a fun stretch of golf. The Owensboro, Kentucky, native opted to return to West End for another season after his senior campaign was cut short due to the COVID-19 pandemic.

After this weekend’s action he’ll join his Commodore teammates for Vandy’s fall season will then compete in a rescheduled Masters Tournament on Nov. 12-15.

“I’m just really looking forward to be able to start competing,” Augenstein said. “It’s such a long week from the time you actually get here until the time you tee off and there’s a bunch that goes into preparing – practice rounds, practice before and after rounds.

“You try to keep it as light as possible because it’s a tiring week, but you also want to make sure your game is in the right spot both mentally and physically.”