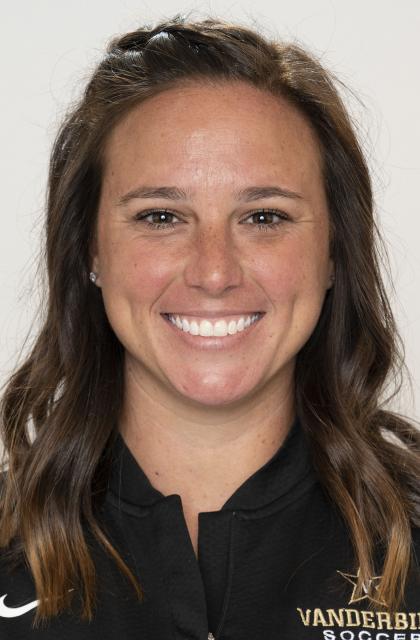 The 2021 season marks Laura Lamberth’s fourth season at Vanderbilt. Serving as the program’s director of operations, she joined the program ahead of the 2018 season after serving in the same capacity at LSU.

In her time with the Commodores, Vanderbilt has won three trophies. Her first season in 2018 saw the Dores win the regular season title while 2019 culminated with the SEC East title. Vanderbilt’s 2020 campaign went one step further, though, by hoisting the SEC Tournament title for the first time since 1994.

Claiming the SEC Tournament as the No. 7 seed in 2020, Vanderbilt scored an SEC Tournament record 14 goals across four games on the way to beating Mississippi State (4-0) and a trio of top-15 teams in No. 13 Tennessee (4-2), No. 8 Texas A&M (3-1) and No. 6 Arkansas (3-1). With the 2020 NCAA Soccer Championship moved to April and May of 2021, Vanderbilt had earned the automatic bid to the tournament thanks to the SEC title but it wasn’t done there. Punching its ticket to a fourth-straight NCAA Tournament to mark the second-longest run of consecutive tournaments in program history, Vanderbilt put an exclamation point on the journey by garnering its first-ever NCAA Tournament seed at No. 16 and reached the second round of the tournament for the third time in four seasons.

In 2019, the Commodores captured the SEC East Title and advanced to the NCAA Tournament for the third-straight season. The Commodores concluded the season with a 14-5-2 record while advancing to the semifinals of the SEC Tournament.

The 2018 Commodores won the SEC for the first time since 1994 and third regular season championship in program history. They reached the NCAA Tournament for the second-straight season as well as advancing to the second round of the tournament.

Lamberth joined the Commodore program after she was the director of soccer operations at LSU from 2014-18. Before her time at LSU, she served as a graduate assistant women’s soccer coach at East Tennessee State from 2012-13.

Lamberth graduated from Middle Tennessee State in just three and a half years in December 2011 with her Bachelor of Science degree in health and human performance with a concentration in Exercise Science. She then obtained a master’s degree in kinesiology and sport studies with a concentration in sport management from East Tennessee State in December 2013.