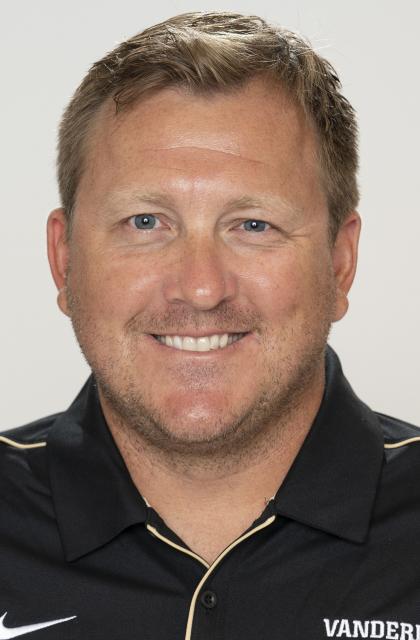 Joining head coach Darren Ambrose at Vanderbilt since the start in 2015, the 2021 season is the seventh for Ken Masuhr at Vanderbilt. Serving as the program’s associate head coach, he also coaches the defensive unit and is the team’s recruiting coordinator.

With the program since Ambrose took over ahead of the 2015 season, Masuhr was elevated from assistant coach to associate head coach in April 2018.

Helping bring a championship mentality to the program, Masuhr has helped guide Vanderbilt to SEC trophies in three consecutive seasons. Starting with the 2018 SEC regular-season crown, the Commodores won the 2019 SEC East title before going on to claim the 2020 SEC Tournament championship in 2020. Along the way, Masuhr has helped the Commodores to 14 wins over nationally-ranked opponents through the first six seasons, including four victories over top-10 teams. For comparison, the program had just eight wins over ranked foes before the arrival of the new staff in 2015.

Helping Vanderbilt to 70 victories thus far, the Commodores have averaged 13 wins per season since 2017. With a focus on the defensive side of the ball, Masuhr has developed some of the stingiest back lines in the SEC while also tutoring players like Myra Konte, who became the first Vanderbilt player selected in the NWSL Draft in January 2021 when she was picked 30th overall by the North Carolina Courage.

The extended 2020-21 season reflected challenges the COVID-19 pandemic brought to the world, but Masuhr helped the team navigate adversity from the start to achieve his championship vision in capturing the 2020 SEC Tournament title in dominating fashion.

After fighting through a 1-3 start to the season with three one-goal losses, Vanderbilt went on to win seven of its last eight games on the way to the SEC title, the first tournament title for the Commodore program since 1994.

Vanderbilt’s 14 goals during the 2020 tournament set a new SEC record, while allowing just four on the defensive side. Along the way, the Commodores defeated Mississippi State 4-0 in the second round before taking out top-15 programs in second-seeded and 13th-ranked Tennessee 4-2 in the quarterfinals, third-seeded and eighth-ranked Texas A&M 3-1 in the semifinals and top-seeded and sixth-ranked Arkansas 3-1 in the final. Thanks to momentum from the SEC title, Vanderbilt went on to earn its best national ranking in program history, checking in at No. 4 in the nation.

With the 2020 NCAA Soccer Championship moved to April and May of 2021, Vanderbilt had earned the automatic bid to the tournament thanks to the SEC title but it wasn’t done there. Punching its ticket to a fourth-straight NCAA Tournament to mark the second-longest run of consecutive tournaments in program history, Vanderbilt put an exclamation point on the journey by garnering its first-ever NCAA Tournament seed at No. 16 and reached the second round of the tournament for the third time in four season.

The 2018 Commodores reached the NCAA Tournament and hosted a postseason game for the first time since 2005. The Commodores posted 10 shutouts along the way, increasing the total from seven in the 2017 season.

In 2017, Masuhr and the Dores had a breakthrough in making their first NCAA Tournament since the 2006 season and won the program’s first NCAA Tournament match since 1998, holding opponents to one goal or fewer in 17 of 22 games. Graduate transfer defender Stephanie Amack was named First Team All-SEC, First Team All-Southeast Region and a Second Team All-American, while then-freshman Konte earned a spot on the SEC All-Freshman team. Masuhr served as acting head coach for the Commodores’ SEC match with Missouri on September 29 in Nashville while head coach Darren Ambrose attended a family event. The Commodores won the match, 5-3, posting their highest goal total of the season.

In 2016, the Commodore defense posted four shutouts, including a 2-0 home win over No. 14 Texas A&M. Junior defender Cristina De Zeeuw was named to the second team All-SEC. She also earned a spot on TopDrawer Soccer’s Team of the Week and was named SEC Defensive Player of the Week on Sept. 26. The Dores brought in 10 freshmen and most of them made immediate impacts on the squad. Grace Jackson started all 19 games and was named to the SEC All-Freshman team. She led the Commodores in points (16), assists (6), game-winning goals (3) and tied for the lead in goals (5). Five freshmen scored a goal for the Commodores during the 2016 season.

In his first season at Vanderbilt, the Commodores allowed 23 goals the entire season, marking the fewest since 2006. The Dores had six shutouts throughout the year and did not concede a goal against No. 12 Ole Miss and No. 20 Kentucky.

Prior to 2015, Masuhr spent four seasons at Penn under Ambrose. In Masuhr’s four years, the Quakers never allowed more than 19 goals a season. The team led the nation in shutout percentage and set a program record by allowing just seven goals in 2011, his first season with Ambrose. In 2013, Penn recorded 12 shutouts, gave up only eight goals and went 12-1-4, setting a program record for fewest losses in a season.

In his first three seasons at Penn, Masuhr helped guide the Quakers to three top-three finishes in the Ivy League. In 2011, Penn went 14-2-1 to tie the program record for overall wins and set the mark for winning percentage. Three players were named All-Ivy all four seasons, including three straight years of three players being named First Team All-Ivy, which had never happened in the 20-plus year history of the program.

Masuhr joined Penn from Monmouth, where he spent two seasons as an assistant coach and recruiting coordinator with the Hawks. In his first season, Monmouth won the Northeast Conference (NEC) Tournament championship and advanced to the NCAA Championship first round.

Masuhr worked with the Hawks’ defensive unit, and had two players earn NSCAA All-Region honors in 2009 (Ali Kliment, Lia Fierro). Kliment also was named the NEC Defender of the Year in 2009.

Masuhr was also heavily involved in the youth soccer scene in New Jersey. Formerly, he was an assistant coach with New Jersey’s under-17 Girls’ Olympic Development Program team, which won regional championships in 2010 and 2011 without allowing a goal in those two years. Those teams featured 10 ODP regional players and three national team members. Masuhr also worked with Continental FC Delco in Philadelphia.

In fact, his first coaching job came when he was only 19 and still in college as he was healing from a broken leg. He coached a club team in New Jersey while he was at Richard Stockton College, making a nearly 90-minute commute each way a couple days a week.

“It was just an incredible group to be around, and basically I fell back in love with the sport again,” he said. “That experience made me want to coach and be a part of this process the rest of my life… I (also) felt it made me a more conscious player because the things I was trying to teach all of a sudden started coming out in my own game when I finally was healthy. It was a reward on both ends.”

As a player, Masuhr began his college career at Rutgers University, where he helped the Scarlet Knights win the Big East title and earn an NCAA Tournament bid in 1999. Masuhr then transferred to Richard Stockton College, where he played a role on the 2002 and 2004 Osprey teams that won New Jersey Athletic Conference (NJAC) championships and earned NCAA Tournament berths.

Masuhr graduated from Richard Stockton with a bachelor’s degree in psychology, and he also holds a Master of Public Administration degree from Kean University. As a coach, Masuhr has an “A” license from the United States Soccer Federation (USSF) as well as the Premier Diploma from the National Soccer Coaches Association of America (NSCAA).

Masuhr lives in Nashville with his wife Megan who is the varsity girls soccer coach at the University School of Nashville, and their two children Landon and Miller.

Ambrose on Masuhr joining Vanderbilt: “When you put a staff together you want to have people who share the same vision you do and also have the same values you do. Over the last five years that he has been with me, work ethic and commitment are two of the biggest things. He is not afraid to challenge. He is not afraid to speak his mind. I think that shows the tremendous amount of trust we have in each other. He is one of the guys that has a work ethic, an engine and a passion for it unlike anyone I’ve ever come across.”

Masuhr on joining Vanderbilt: “I’m just really appreciative that Darren thought to include me in his vision for the program. I’m passionate about what I do and I get excited talking about it because it means so much. I’m fortunate to have worked with some great coaches and seeing (Ambrose) teach has been really incredible. At Penn I walked into a program that was already set up for success, but at Vanderbilt I get to help him try and establish something new. We’re going to work very hard and I look forward to the challenge.”

Masuhr on his coaching philosophy: “Coaching the defenders is really rewarding. Day to day, we try to find what the best versions of themselves are and put that toward the team mentality. How hard are they willing to work? How much sacrifice, physical risk? Those characteristics show your teammates how much you care about them. That’s what defending is. I hope our players try to extend beyond themselves in tackling hard, being confident in the air, and pushing through exhaustion. Those aren’t really the most comfortable things to do. But that’s how I feel defenders show how much they care about the rest of the team. They put themselves out there.”