Defensively with Breckterfield’s units applying the pressure, Wisconsin allowed an average of just 16.6 points/game and 107.7 rushing yards/game during his tenure.

Finishing at Wisconsin in 2020, Breckterfield directed a defensive line that helped the team limit opponents to 299.9 yards/game, the fewest in the Big Ten, and 96.1 rushing yards/game, the second-lowest average in the conference. Wisconsin finished third in the Big Ten in scoring defense, yielding 17.4 points/contest. Senior Isaiahh Loudermilk earned third-team accolades to cap the campaign.

Breckterfield rebuilt the Badgers’ depth up front in 2019 around a talented trio of defensive ends in Loudermilk, Garrett Rand and former walk-on Matt Henningsen. That group combined with freshman nose tackle Keeanu Benton to rack up 17.0 tackles for loss and 10 of the Badgers’ school-record 51 sacks — the nation’s second-best total.

In his first year in Madison, Breckterfield helped the Badgers build the nation’s top defense, ranking No. 1 in scoring defense (13.7 points/game) and No. 2 in total defense (268.5 yards/game) in 2015. He developed a deep front line for the Badgers’ 3-4 defense, anchored by a trio of defensive ends who became part of the winningest senior class in school history with their four-year record of 45-10: Alec James, Chikwe Obasih and Conor Sheehy.

Obasih joined James and Sheehy to give Wisconsin a trio of All-Big Ten honorees at defensive end in 2016, when the three paired with nose tackle Olive Sagapolu to record 10.0 tackles for loss and 8.5 sacks.

His most successful pupil was Aaron Donald, a first-round pick of the St. Louis Rams in the 2014 NFL Draft following a senior season that saw the consensus All-American sweep the nation’s top defensive honors by claiming the Bronko Nagurski Trophy, Chuck Bednarik Award, Outland Trophy and Rotary Lombardi Award. Donald led the nation with 28.5 tackles for loss and ranked 11th in the country with 11.0 sacks as a senior.

Breckterfield arrived at Pittsburgh after coaching the defensive line at UCLA in 2011. The Bruins played in the inaugural Pac-12 Championship Game and the Kraft Fight Hunger Bowl.

Prior to UCLA, Breckterfield coached the defensive line at Montana during the 2010 season. The Grizzlies led the Big Sky Conference and ranked 14th nationally in tackles for loss/game with 7.6, and stood second in the league and 18th nationally in sacks/contest with 2.6. The year prior to Breckterfield’s arrival, Montana ranked 103rd and 88th in those categories, respectively.

He began his coaching career under Mike Riley, his former head coach, at Oregon State. Joining the Beavers as a volunteer assistant in 2006, Breckterfield went on to serve as a graduate assistant in 2007 and 2008, working with the defensive line. The 2008 Beavers finished with a No. 18 ranking after going 9-4 with a victory over Pitt in the Sun Bowl.

A tenacious defensive end at Oregon State, Breckterfield finished his collegiate career as the Beavers’ career leader in tackles for loss (55.5) and sacks (19.5). As a senior in 1998, he was a third team Associated Press All-America and received the Pac-10’s Morris Trophy Award as the top defensive lineman in the league as voted on by Pac-10 offensive linemen. Breckterfield additionally was named Oregon State’s Male Athlete of the Year and played in the prestigious Hula Bowl.

Breckterfield was twice named the Beavers’ most valuable player and was the team’s defensive rookie of the year as a freshman.

Following his Oregon State career, he played five seasons in the Canadian Football League with the Toronto Argonauts (1999-2000) and Winnipeg Blue Bombers (2001-03). In Breckterfield’s initial season with Winnipeg, the Blue Bombers advanced to the Grey Cup final after posting a franchise-best 14-4 mark and tying a CFL record with 12 straight wins.

Breckterfield earned a bachelor’s degree in liberal studies from Oregon State. He and his wife, Carol, have three sons: Kalevi and twins Rocky and Riley. 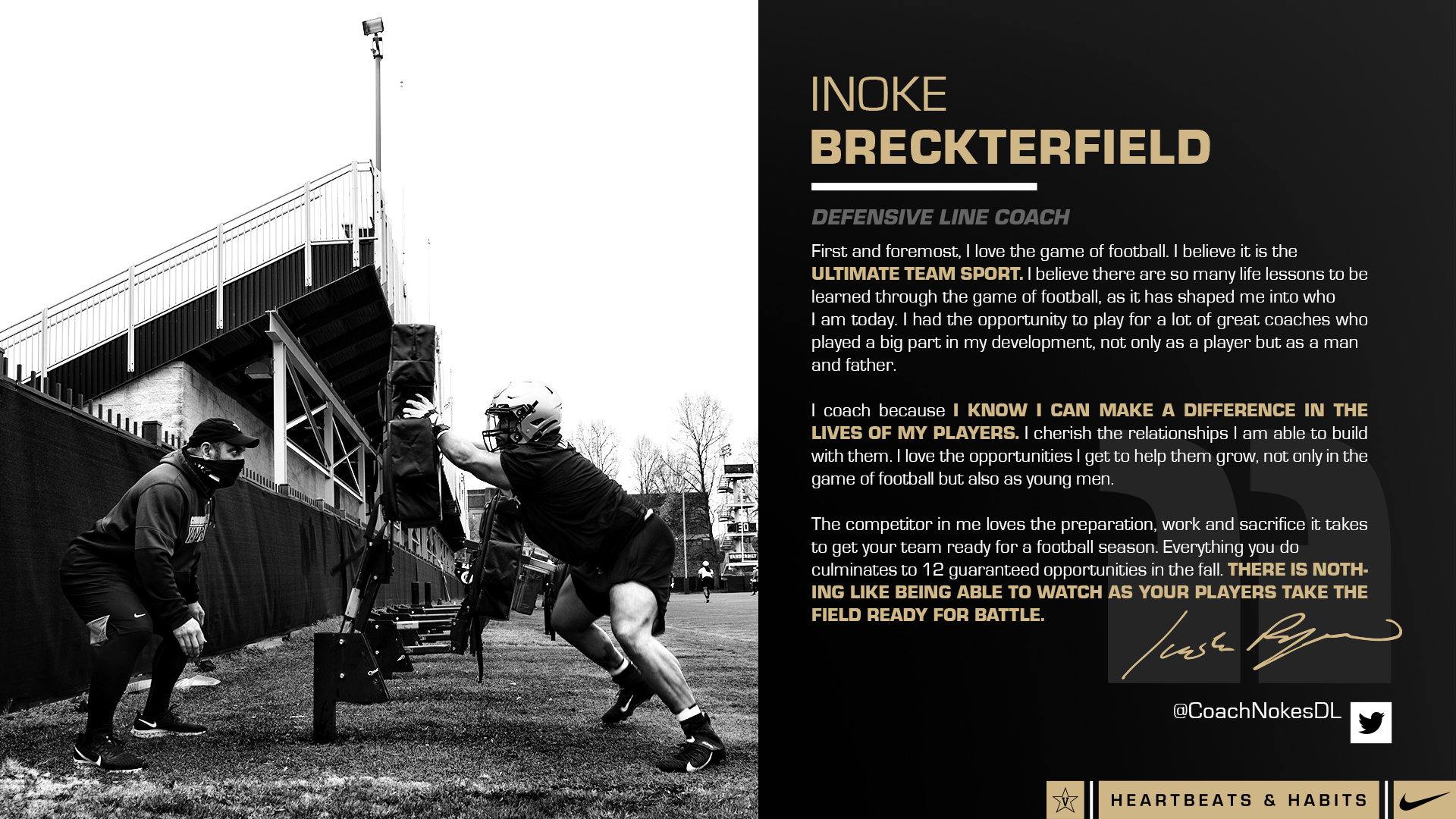