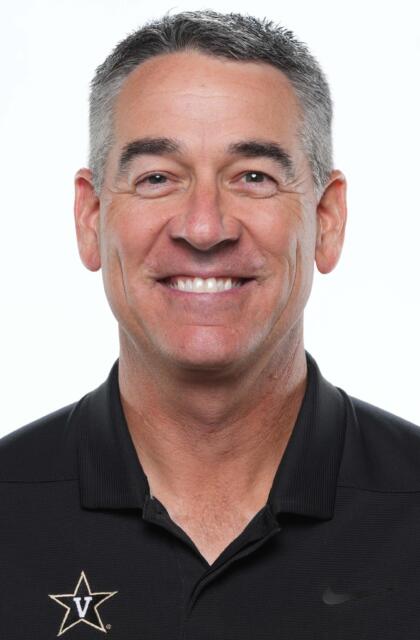 For Greg Allen, who is considered one of the outstanding collegiate golf coaches in the NCAA, the 2022-23 season is his 16th at the helm of the Vanderbilt women’s golf program.

Allen has made a big impact at Vanderbilt, leading the Commodores to 13 postseason appearances while advancing to seven NCAA Championships including five consecutive from 2010-14 for the first time in program history.

Following the 2018-19 campaign, Allen was recognized as Southeastern Conference Coach of the Year, the first such honor in his career, after guiding the Commodores to a program-record six victories. The 2019 postseason was highlighted by winning the NCAA Auburn Regional Championship in early May, which propelled Allen’s nationally-ranked Vanderbilt squad into the NCAA Championships. One of his top pupils, freshman standout Auston Kim, also swept the 2019 NCAA Auburn Regional Championships individual title.

Allen has guided the Commodores to 15 tournament titles in his tenure on West End, including four NCAA Regional crowns after the program claimed the title at the NCAA Franklin Regional held on its home course (Vanderbilt Legends Club) from May 9-11 during the 2021-22 season.

Allen’s seventh Vanderbilt team in 2013-14 ranks with the 2018-19 among his most successful to date, winning four tournaments including the 2014 SEC Championship and the NCAA East Regional, the Commodores’ first victories at the events since 2004. Simin Feng also won medalist honors at the SEC Championships and the Central District Invitational, while Jennifer Hahn won the NCAA East Regional individual title. Additionally, three different Vanderbilt golfers finished in the top five in 2013-14.

During his tenure at Vanderbilt, Allen’s teams advanced to seven NCAA Championships (2010-14, 2019, 2022), including five consecutive from 2010-14. He has coached two first-team All-Americans in Marina Alex — a two-time SEC Player of the Year recipient — and Lauren Stratton, NCAA regional champions in Kim and Hahn, and SEC Freshman of the Year Feng.

Annually, Allen’s Commodores are among the SEC’s leaders in academic achievement. In 2017, he mentored the program’s SEC Scholar-Athlete of the Year in Kate Sborov.

Allen has guided three teams to conference championships — the 2001 and 2002 Pac-10 titles at Arizona and the 2014 SEC crown at Vanderbilt.

In 2010, his first NCAA Championships team at Vanderbilt broke through to finish seventh in Wilmington, North Carolina. Also in 2010, he coached the SEC Player of the Year in Alex and had two freshmen make the All-SEC Freshman team in Anna Leigh Keith and Stratton.

In 2011, his Commodore team qualified for the NCAA Championships after winning a one-hole playoff against Florida State in the NCAA East Regional. It was Allen’s second consecutive trip to the national championship as Vanderbilt’s coach and eighth overall. He also guided Vanderbilt to its first back-to-back top-10 finishes at the NCAA Championships after his 2011 squad ended the event in a tie for 10th place. Two of his players, Alex and senior Megan Grehan, were named to the All-SEC second team at the end of the regular season.

In 2012, Vanderbilt advanced to the NCAA Championships for the third consecutive season and a date on their home course when the Commodores finished in second place at the NCAA Central Regional in Columbus, Ohio. The Commodores’ second-place finish was the second-best at a regional in program history — only the 2004 team’s win at the Central Regional was better. Vandy finished in 11th place at the national championship, and Alex and Stratton were each named NGCA First-Team All-Americans. It was the first time in the history of the program that the Commodores had two first-team All-Americans in the same season.

Allen came to Vanderbilt after a seven-year tenure as the head coach at Arizona, where he twice won the Pac-10 Conference, finished as NCAA runner-up in 2002 and coached Lorena Ochoa — the number one ranked player on the LPGA Tour before her retirement in 2010 — among nine other All-Americans.

Allen had a lengthy record of achievement at Arizona during his seven years there. In addition to his Pac-10 titles and 10 All-Americans, he coached eight NCAA All-Scholars, 13 Academic All-Pac-10 student-athletes, three NCAA Players of the Year, two National Freshman of the Year, three Pac-10 Players of the Year, two Curtis Cup selections and 21 All-Pac-10 performers. Two of his players won the Golfstat Cup Award for the nation’s lowest stroke average on three different occasions. His Wildcat teams also won nine tournament championships and registered 28 individual victories.

Allen arrived at Arizona after serving as assistant men’s golf coach at Texas from 1998-2000. He helped lead the 1999-2000 Longhorns to a banner year that included the NCAA Central Region championship and a fifth-place finish at the NCAA Championships, its their best result in five years. The squad ended the season ranked No. 8 in the final MasterCard Collegiate Rankings. The 1998-99 team had its best showing in six years, as it earned three tournament victories and finished in the top three in seven of its 13 competitions. Well known for his rapport with collegiate players, Allen handled many of the day-to-day operations for the Longhorns and assisted head coach John Fields with scheduling, recruiting and coaching at practices and tournaments.

He is a native of Beechmont, Kentucky and graduated from Murray State in 1993 with a degree in journalism. As a student, he worked in the sports information office, where he was a liaison for numerous sports including golf. Prior to graduation, Allen worked two summers as a communications intern for the AJGA, where he was responsible for all on-site media relations at 10 national junior golf tournaments.

Allen and the former Sarah Moore were married in August 2019. They are the parents of six children: Maggie, Mollie, Mason, Kylie, Mabry and Blake.