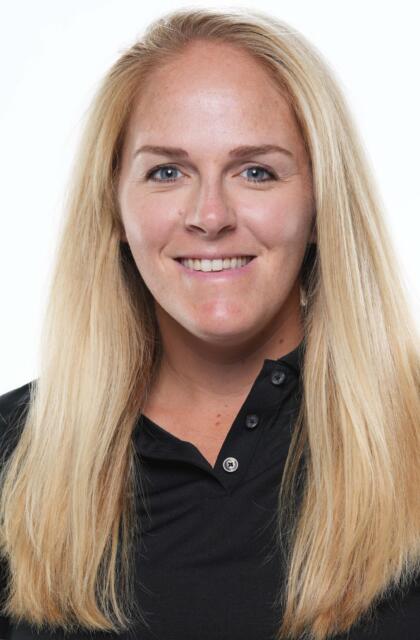 The 2022-23 season is the sixth on West End for Emilie Meason. She was promoted to associate head coach after helping the Commodores advance to the 2019 NCAA Championships.

Meason, an All-America student-athlete at Georgia, joined the Commodores’ as an assistant coach in July of 2017 after spending the spring of 2016 as a volunteer assistant coach at her alma mater, and has helped the Commodores return to postseason competition while advancing to the 2018, 2019 and 2022 NCAA Championships. During the 2021-22 season, she was instrumental in Vanderbilt capturing its fourth NCAA Regional title in program history on its home course (Vanderbilt Legends Club) from May 9-11.

Meason’s importance to Vanderbilt’s success during the 2018-19 campaign was acknowledged by her peers when she was named Assistant Coach of the Year by the Women’s Golf Coaches Association.

During the 2018-19 season, Meason’s assistance with the Commodores paid huge dividends. The team established a single-season program record with six tournament victories, including the NCAA Regional Championships in Auburn, Alabama, and Mason Rudolph Championship in Franklin, Tennessee.

Meason was instrumental in three Commodores earning All-SEC recognition in 2019, including Auston Kim, who became one of the nation’s top freshmen, medalist at the NCAA Auburn Regional Championships, and a qualifier for the U.S. Women’s Open.

In her first year on campus, Meason helped Allen mentor a young Commodore squad into 2018 NCAA postseason play after the team missed the tournament one year earlier.

Meason, a four-time All-SEC performer, was a mainstay in the Bulldogs’ lineup from 2009-13, posting 14 top-10 and 28 top-20 finishes in 43 events played. She was a three-time medalist, securing wins at the 2010 Auburn Invitational, the Commodores’ own Mason Rudolph Championship in 2012 and the 2013 Bryan National.

Meason’s career-low round of 6-under-par 66 is second all-time at Georgia. She posted that score both in the first round of the 2012 Lady Puerto Rico Classic and in the third round of the 2010 Tiger/Wave Invitational. Meason also owns two of the top-15 season stroke averages in Georgia history. As a junior, she recorded the ninth-best average of 73.28, and as a senior, she posted a stroke average of 73.47, which is 14th on the Bulldogs’ all-time list.

Following a brief career competing professionally, Meason regained her amateur status in 2015. She qualified for the U.S. Women’s Amateur that summer and also helped Georgia win the USGA’s Women’s State Team Championship later in the year.

A native of Hoschton, Georgia, Meason was a standout junior who advanced to match play at both the 2008 U.S. Girls’ Junior and the 2009 U.S. Women’s Amateur and participated in the Canon (now Wyndham) Cup.

Emilie is married to William Meason, who played collegiate golf at Arkansas, and welcomed their son Hudson in 2021.