NASHVILLE, Tenn. — When speaking to AJ Blazek about offensive line play, he has seen what can make a unit exceptional between the white lines. Ultimately, however, it’s the mentality as much as the technique that can make the five guys up front special.

“You have to be a guy who is wired not to let the guys around you down,” Blazek said. “I think that’s what makes offensive linemen such great teammates.”

Blazek joined the Vanderbilt football staff this month to lead the Commodores’ offensive line into 2021 for head coach Clark Lea. Blazek has nearly two decades of coaching experience after being a teammate of Vanderbilt offensive coordinator David Raih at Iowa at the start of the century.

After recently making stops at North Dakota State and Wyoming, respectively, Blazek jumped at the chance to join Lea in Music City. It will also be his first opportunity to coach in the SEC. 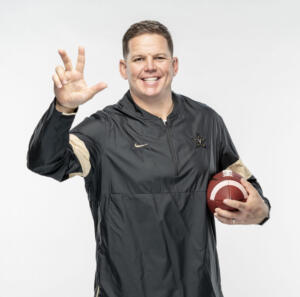 “The challenge of building an offensive line to help coach Raih’s offense and the rest of our offensive staff and then to help coach Lea and our defensive staff’s team, that’s the fun part for me. That’s my role in the whole thing,” Blazek said. “I think when you get to be on the ground level of putting a program and team together, it means everything.

“The passion and the time put into it, the sweat, every little piece of work had to be ground out and done and you had the opportunity to be a part of it. I’m looking forward to that and doing it at the highest level.”

After playing along the offensive line for Iowa where he became close friends with Raih, a quarterback, Blazek coached for the Hawkeyes briefly before joining the Fort Hays State (Division II) staff. Blazek was named the 2012 Assistant Coach of the Year by the American Football Coaches Association while at Winona State (Division II) in 2012.

Following Winona State, Blazek helped turn around a Western Illinois program that averaged six points/game before his arrival and went to the second round of the FCS playoffs three years later.

After a stint in the Big Ten at Rutgers, he moved to FCS power North Dakota State, where he was part of a Bison team that rushed for 4,601 yards in 2019 en route to a national championship.

“Whether it was Rutgers, North Dakota State, Fort Hays State or Winona State, I’ve always liked to recruit smart, tough, dependable guys,” Blazek said of his career path leading to West End. “I’ve had an affinity to build! You learn how important the chemistry of the coaches and the players beliefs are. 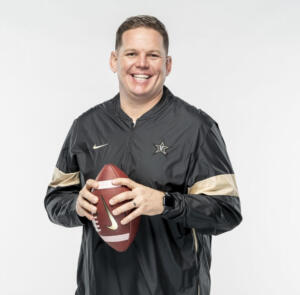 “Friends and coworkers in this profession, with the way they spoke about coach Lea was off the charts as a human being, even more than a football coach. That was huge to me.”

Blazek has a knack for building strong bonds with the student-athletes. Last fall, with North Dakota State having only played one game due to the COVID-19 pandemic, Blazek joined players on a hunting trip.

Now he’ll be charged with hunting victories this fall and molding the Commodores into a new-look force in the trenches. That endeavor will begin during spring practice as Blazek looks to build his best blockers.

“When I say tough, it’s when your fingers are sore and it’s late in the season and your feet hurt – and guess what? After the first day of practice you don’t ever really feel great again,” Blazek said. “I’m process-driven – the process to get better regularly. Results will come if the process gets to work its course.”