NASHVILLE, Tenn. — Vanderbilt freshman Iyana Moore knows she is very good at basketball. She is good now. She has been good for a long time.

Because of that, Moore has to remind herself not to be complacent.

“I just know there is no limits. I’m always seeing how I can improve,” Moore said. “I never go in like, ‘OK this is enough.’ There’s always so much more I know I can do and can give for the team that I’m just never satisfied.

“I just try to just learn from everything I do just knowing that I can always be better no matter how good people say I can be or I am right now. I just know that’s there’s still some more left.”

It’s that type of attitude that has Moore being considered as one of the top freshman in the Southeastern Conference. Going into this weekend she leads all SEC freshmen in scoring at 11.9 points per game, a mark that is 21st overall.

The 5-foot-8 guard is undoubtedly one of the pivotal bricks in the program that first-year head coach Shea Ralph is building. But Moore admitted she had second thoughts about becoming a Commodore before she ever enrolled.

“They always tell you not to pick a school based on the coaches, but I feel like I had a really strong bond with everybody on the old coaching staff. Of course my options did waiver,” Moore said. “Like, ‘Do I want to stay here?’ But I picked it because of the school, the people, the team, the family environment, being close to home. It’s going to work out regardless, no matter who I’m playing under as long it’s still that family environment.

“All the freshmen were staying, we all talked about it. I was like, ‘OK it’s going to work.’ ” 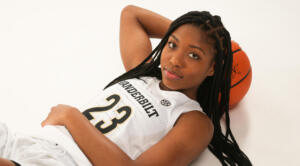 Moore was born and raised in Milwaukee, Wisconsin, where she remembers going to the gym with her father and putting up shots, dribbling and just running around the court for fun. She joined an organized league at the age of 5 and recalls coming to the realization she was better than her peers when she played on a fifth-grade team … as a second-grader.

A move to Tennessee when Moore was in sixth grade because of a job promotion for her mother landed her in Murfreesboro. The summer ahead of her freshman year at Blackman High School she received a scholarship offer from Tennessee State in another life-changing moment.

Moore quickly became one of the best prospects in the state of Tennessee and the Southeast. She was considered a top-100 recruit nationally and one of the top-20 point guards in the 2021 signing class.

In April of 2020 she committed to Vanderbilt and former head coach Stephanie White. One year later, to the exact day, Vandy decided to make a change in head coaches. 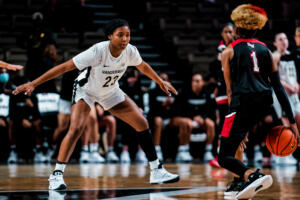 “I first heard from (Vanderbilt vice chancellor for athletics and university affairs and athletic director) Candice (Lee) the next day after the old coaching staff left. The conversation was like, ‘We still want you, we’ll find a great coach. Just know that we still want you. It’s still going to be the same type of environment, the same everything that you were told with the last coaching staff.’

“Then as soon as coach Ralph was hired, I heard from her a couple days after. That conversation was, ‘I know you weren’t recruited by me or you didn’t come to play for me, but I promise I’m going to get to know you.’ She made a great effort having (video) calls, having phone calls. We had those conversations every now and then and those conversations were all about basketball. She did her research so it was pretty cool to know that she was invested in me even though I wasn’t recruited by her at all.”

Moore, however, got off to an awfully slow start once she put on the gold and black.

She went 4-for-18 from the floor and totaled just 12 points in her first three games. A homecoming in November to play at Middle Tennessee was somewhat disastrous with nine missed shots and two turnovers in a 55-46 loss.

Since then? The kid has been virtually unstoppable. Thirteen times this season Moore has finished in double figures. She’s averaging nearly two assists per contest and shooting better than 40 percent from behind the 3-point line.

On Dec. 28, Moore announced her presence to the college basketball world with 32 points and a Vanderbilt single-game record nine 3-pointers in a 94-42 win over Alabama State at Memorial Gymnasium.

“(Moore’s) growth has been tremendous,” Ralph said in January. “I’m proud of her for how far she’s come. “We’ve put a lot on her shoulders as a young kid but we’re going to keep putting that on her shoulders because she’s capable.”

In case you missed one of @imoore_23‘s 9️⃣ 3’s last night… 👀#AnchorDown pic.twitter.com/22MswJJxyp

Moore, who had narrowed her college decision down to Vandy, North Carolina State and Syracuse before becoming a Commodore, said she wouldn’t be where she is today without the support of her mom and stepfather, who both work for the Veterans Heath Administration, and father, who has a career in information and technology services and who resides in Arizona. She also draws motivation from her five siblings.

Leaning toward a major in human and organizational development, Moore, a self-described sneakerhead, has her sights set on possibly owning a business one day. But those plans will have to wait for a few years.

There is more to come from Moore.

“The first thing I want people to think about me is how much energy and effort I give for the game and how good of a teammate I am, how much I put others before myself no matter if it’s the extra pass or giving the high five or just little things that I just try to give my teammates everything I have,” she said. “I just want to make Vanderbilt better than what it was when I got here.” 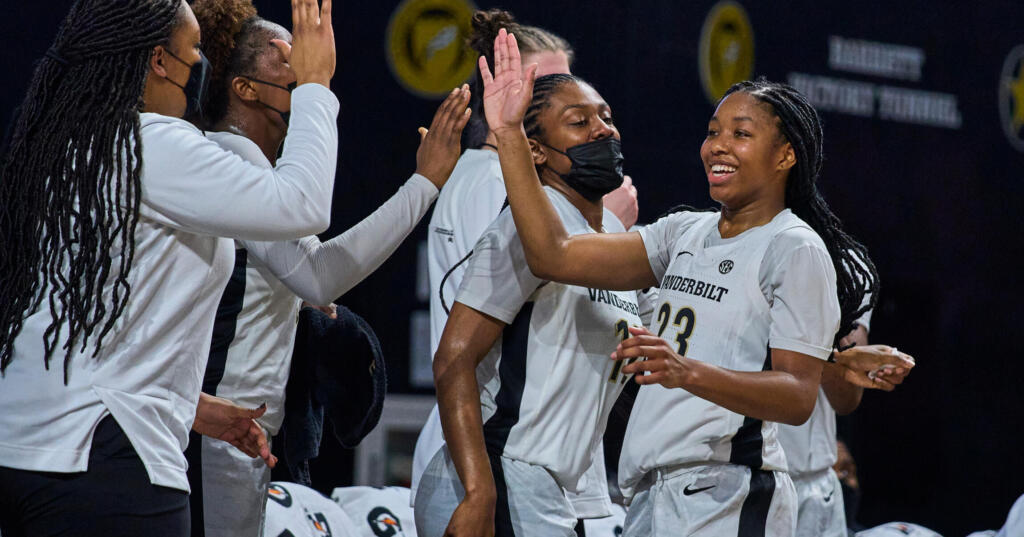 November 23, 2021 The Pioneer Behind Shea Ralph