NASHVILLE, Tenn. – Following a season that was cut short due to the pandemic outbreak, third-year head coach Beth Hewitt and the Vanderbilt lacrosse team announced the 2021 slate on Friday. The Commodores will play a 17-game schedule, split between nine home and eight road contests with ten conference matchups.

American Athletic Conference play will be in a double round robin format. With the exception of Easter weekend, all contests will take place on Fridays and Sundays. Two weekends will remain open in the event conference matchups need to be rescheduled.

“We are thrilled about our 2021 lacrosse schedule,” said head coach Beth Hewitt. “We want to thank the American Athletic Conference for creating a schedule that would keep everyone safe and allow us to compete at the highest level.

We believe we achieved both of those goals not only from a conference level but also in our non-conference schedule. We are psyched to pick up where we left off last season with Notre Dame and can’t wait to get things underway at practice this weekend.”

Vanderbilt will play five games against teams that finished in the IWLCA’s final top-25 from last season, and that includes No. 1 North Carolina and No. 2 Notre Dame.

Starting the season off on the road for the second consecutive year, the Dores will face off with Notre Dame on Feb. 13. The Irish finished last year 7-0, including a win over the Dores in Nashville in the final game of the 2020 season.

The Commodores’ home opener is slated for Feb. 21 against Colorado, quickly followed by a visit from Central Michigan on Feb. 24. Closing out the month, Vanderbilt will take on North Carolina in a road tilt on Feb. 28.

Once back home, the Dores will close out nonconference play with three matinees. On March 3 and 7, Vanderbilt will host Mercer and High Point, respectively. To close out the homestand, the Commodores will welcome Kennesaw State on March 10. A year ago, the Dores used five goals by Emily Mathewson to cruise to a 21-11 road win over the Owls.

To being AAC action, Vanderbilt will travel to the Queen City to take on Cincinnati on March 19 and 21. A week later, the Dores will return to the Tar Heel state to take on the East Carolina on March 26 and 28.

On April 1 and 3, Vanderbilt will welcome league newcomer Old Dominion for a pair of matchups. The Dores will trek south to take on Florida on April 16 and 18 in their last trip before closing out the regular season April 23 and 24 against Temple on West End.

The AAC tournament will be contested May 6-8 and the NCAA Championship is set for May 28-30. 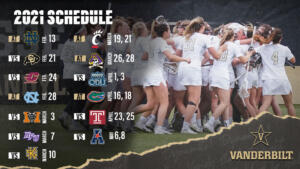