A Different Shade of Blue

NASHVILLE, Tenn. — In the opening match of the 2020 season, Vanderbilt trailed the Kentucky Wildcats 2-0 at halftime.

The Commodores were down, but never out.

Haley Hopkins started the comeback with a goal and soon enough the Commodores were back in it. The turning point in the game came when Blue Ellis came off the bench in the second half to tie the match at 2-2.

After that goal, the momentum swung in the Commodores’ favor and Ellis said, “It was over from there.”

Ellis recently took time to reflect on her clutch performance against Kentucky, how she ended up at Vanderbilt and her life goals after her college career is over:

VUCommodores.com: What was the general feeling throughout the game?

Ellis: “When we were down at halftime, there was a little lull of the team. We have never been down like that as a team. But we also knew that once we got one goal, the second and third goals would be a lot easier to get. Everyone worked very hard and we kept attacking.”

In hindsight, how prepared do you think you were for that moment?

“I felt very prepared. I think our team was very prepared as well. We worked on quick pass and releases all week in practice and when Madiya (Harriott) passed the ball, it was like another repetition at practice.”

How did the nickname “Blue” come about?

“My first name is Paola and it is hard for a lot of people to pronounce. When I was in the seventh grade I was playing in a club game and the referee did not know how to say my name so he asked if there was anything else he could call me. On the spot I just made up ‘Brenda’ because it was a name I had heard in my science class the week before.

“When he asked what my last name was, I just told him it was ‘Blue’ because it was the color of our uniform and it has always been my favorite color. Jokingly my teammates kept calling me Brenda Blue for the rest of middle and high school. When I got to college I just went by Blue because it is way easier for people to say and remember.”

How did you start talking to Vanderbilt in the recruiting process?

“We had a Friday night club game and it was freezing. Assistant coach Ken (Masuhr) was on the sidelines. After the game, he emailed me. My mom and I took visits to campus, had multiple phone calls and watched most of the team’s games online. By the time I committed, I was very familiar with the program.”

Why did you pick Vanderbilt?

“There are multiple factors that went into my decision. I wanted an environment that challenged me academically, I wanted to be surrounded by a group of girls that shared the same values as me and I wanted a chance to play in one of the best conferences in the country. After a few visits, more research and talking to the coaching staff, it was obvious that Vanderbilt checked all the right boxes as the perfect school for me to further my career.” 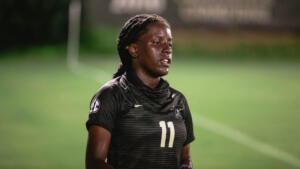 What have you learned at Vanderbilt that you will carry with you the rest of your life?

“I learned early on at Vanderbilt that it is not about the grades you make but the hands you shake. I live by that quote. I have networked and met a lot of alumni who have been very helpful with future career advice and internships.”

What are your career goals after your college career is finished?

“There are multiple things that I want to accomplish. I want to go play professionally overseas for a few years. I visited France and Germany a few years ago and absolutely loved the culture over there. In soccer, I also want to play for the Haitian national team. I was born in Port-au-Prince, Haiti, and representing where I was born is important to me.

“After my soccer career is over, I want to attend medical school and become a pediatrician. I’ve always wanted to impact people’s lives. By teaching soccer to little kids at camps, I realized my passion with working with the youth.”