Vandy makes historic announcement with the return of women's volleyball

NASHVILLE, Tenn. — Vanderbilt is getting a volleyball program.

In a historic announcement Tuesday, Vice Chancellor for Athletics and University Affairs and Athletic Director Candice Lee unveiled plans to (re)create a volleyball program, the 17th Division I varsity sport for the university.

“Today’s announcement has been a long time coming. For some it’s one that people have been waiting to hear for more than four decades,” Lee said. “I’ve said from the beginning that Vandy United is about transforming and reimagining our athletics department. That includes sports sponsorship.

“So it is with great excitement, pride and optimism that I say volleyball is back.”

Vandy volleyball will make its official debut in the fall of 2025. It will become one of 16 competing members of the Southeastern Conference and one of three new squads to join the league alongside Texas and Oklahoma—which are slated to join the conference as full members in 2025.

The next three years and change will give Vanderbilt ample time to find the right head coach and support staff, recruit at a high level and plan for the use of on-campus facilities.

“When it’s time for us to sponsor volleyball, we want them ready to compete at a championship level right away. We need some runway to do that,” Lee said. “We want them to be fully funded, we want to make sure they have the appropriate and adequate staff, all of the support resources—there are a lot of things that go into this, and we want to set them up for success while also making sure that our other sports have what they need.”

Vanderbilt Athletics fielded a varsity-level volleyball team once before, from 1979 to 1980. That team went 23-16 in its inaugural season, beat Sewanee for its first-ever win, beat Georgia for its first victory against an SEC opponent and placed second in the Division III state championship played at Maryville College.

It also participated in the first officially recognized SEC Tournament for volleyball in 1979—the Commodores fell to Georgia, Auburn, Alabama and Ole Miss that year. 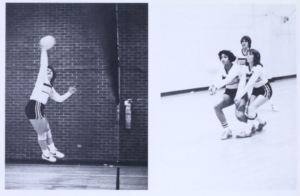 “All I can say, and what I believe, is that volleyball will be a great addition to the women’s sports program at Vanderbilt and a great opportunity for the athletes to compete at the highest level and get a great education,” Debelak said. “I’m thrilled. You can’t imagine.”

The 2025 Commodores will make their volleyball debut in Memorial Gymnasium. The Vandy United campaign will assist in the creation of a team locker room and offices for the coaches and staff.

Lee said an informal committee comprising current club team members, students enthusiastic about the sport, faculty, staff and alumni will usher in the new era of Vanderbilt volleyball by being ambassadors for the inaugural team. And from now until then there will be a plenty of work to do creating the next championship program to wear the black and gold.

“With all that Vanderbilt University has to offer as an elite academic institution located in a great city, and with the momentum and support that we’re experiencing in athletics and as charter members of the SEC, we also have high expectations for success of women’s volleyball. We are eager to find the right coach and begin building the program from the ground up,” Lee said. “To all the talented the young women playing volleyball out there, you need to know that Vanderbilt will be an option for you. We hope you’ll help us build a winning tradition here.”