Vandy Looking for Standouts at Wideout

NASHVILLE, Tenn. — Vanderbilt goes into the 2022 season knowing whom it will rely upon to be its go-to receiver. After that? Well, the competition to become one of the Commodores’ main targets could very much play out over the next four months.

“Our objective for this training camp was get as many guys as we can ready to perform in the game,” Vanderbilt wide receivers coach Alex Bailey said. “We’re trying to build that depth in the room. We don’t have a ton of experience. We do have some guys that have played a lot of ball, but for the most part we’re pretty young from an experience standpoint.”

Bailey, in his first year with the program, does have the assurance of the production of junior Will Sheppard. Sheppard had a breakout sophomore season by hauling in 43 receptions for 577 yards and a team-leading four touchdowns.

Sheppard had two games where he eclipsed 100 yards receiving and two others where he went over the 80-yard mark.

“We’ve got a lot of young guys on the team. We probably have the most inexperienced group as far as in-game playing time. But everybody’s stepping up, getting better,” Sheppard said of his wideout mates. “We’re out there competing every day, 1-on-1s and everything, just trying to help each other get better. All the young guys, they’re pushing the older guys, pushing for spots and pushing for key spots. It’s all just blending together.” 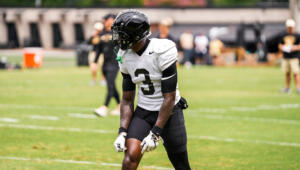 Lining up along Sheppard with the first-team offense during the preseason have been senior Devin Boddie, freshman Jayden McGowan, sophomore Quincy Skinner and fifth-year senior Gavin Schoenwald – Schoenwald has moved into a role as a hybrid tight end and receiver. Boddie caught 29 balls for 263 yards and a score in 2021 while Schoenwald caught his first four career passes after spending his first three seasons in black and gold primarily as a blocking tight end.

McGowan, from Laurens, South Carolina, has been used in a myriad of ways, including in the ground game and on kick returns.

“I feel good about where these guys are. Of course we’ve got so much work to do, but I love their energy, I love their effort and the mentality of our room right now is all about just getting better,” Bailey said. “That’s kind of where we wanted to be right now. We’re taking it one practice at a time, one day at a time.

“All those guys are having that mentality, they’re preparing, they’re practicing, they’re taking care of their bodies as if they’re going to be the starter and I like where they’re at right there.” 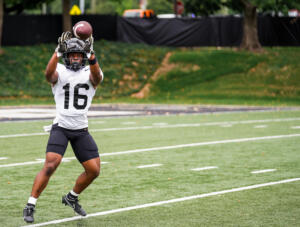 While the aforementioned quintet appears to be the primary group in the wide receiver rotation, juniors Logan Kyle and Wilson Long (a former quarterback) and sophomore Gamarion Carter could be the next men up over time. Kyle is the only receiver among that group with a career reception.

So between now and Aug. 27 when the Commodores take the field at Hawai’i, Bailey will be zeroing in on not only who can make the plays during prime time, but also who can be counted on to strengthen the core from within.

“What we’re trying to create here in practice is the toughest situations that we can outside of a game to kind of prepare those guys for it,” the coach said. “It’s all about their mindset. I like where they’re at – of course we’re not there yet, but I do see gains, I do see them getting better and it is good to see.”