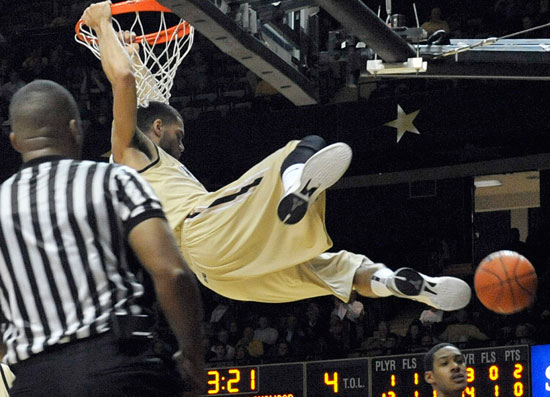 NASHVILLE, Tenn. (AP) — Jeffery Taylor scored 18 of his 29 points in the first half, and the Vanderbilt Commodores rebounded hours after dropping out of the Top 25 rankings by beating Longwood 99-71 Monday night.

The Commodores (7-4) fell out of the 25th spot nationally after starting a three-game homestand by losing to Indiana State. That was their first game in 10 days due to exams so spread out that coach Kevin Stallings had trouble holding scheduled practices or having all Commodores on hand.

They needed the chance to just play, and they got that against a team that just finished moving up to Division I in 2007. John Jenkins scored 19 points for Vanderbilt. Lance Goulbourne added 15 and Brad Tinsley 12. Nine Commodores scored at least three points.

The Commodores already have lost three times to nonconference opponents on their own court to ruin a No. 7 preseason ranking. But in this first meeting with Longwood, Stallings kept senior center Festus Ezeli on the bench to let him rest a sprained right knee that kept him out of the first eight games.

The Lancers, among four independent teams in Division I, already have played — and lost — at Brigham Young, Nevada and Virginia with trips to Gonzaga and Seattle left at the end of the season.

The Lancers led only once on a 3-pointer by Bowman. Jenkins hit a jumper, starting an 11-2 run by Vanderbilt that put the Commodores in control for the rest of the game. Vandy hit four of its first five 3s and finished 12 of 29 beyond the arc.

Goulbourne scored on a tip-in midway through the first half, putting Vandy up 24-14, and the Commodores went on to score the next seven points. Longwood managed to get back within 10 twice, the last at 38-28 on Carey’s second of back-to-back 3-pointers. Taylor answered with a dunk off a fast break, then scored on a tip-in in, starting a 12-3 spurt capped by a 3-pointer by Taylor for a 50-31 lead. Taylor scored on a layup with 2 seconds left for a 52-33 halftime lead, the most points they’ve scored this season in the first half.

Jan van der Kooij hit a jumper for Longwood to open the second half. Vanderbilt answered with a 3-pointer by Jenkins, another 3 by Tinsley, then Jenkins drove for a layup for the Commodores’ biggest lead at 60-35 with 18:01 left.

Stallings benched Taylor with 8:09 left, a point off the career-high 30 points he scored Dec. 7 in a win at Davidson. Jenkins and Goulbourne played a few minutes more before the reserves finished up. Goulbourne’s driving layup with 5:15 left gave the Commodores their biggest lead at 91-64.