NASHVILLE, Tenn. – The college careers of Vanderbilt golf seniors Will Gordon and Patrick Martin will come to an end, one way or another, at this weekend’s NCAA Men’s Golf Championship in Fayetteville, Arkansas.

“That would take a lot of thinking,” Limbaugh joked.

Gordon and Martin enter the NCAA Championships looking to seal their Commodore career with the first national title in program history. But no matter how the Dores’ trip to Fayetteville ends, that duo will leave Vanderbilt as perhaps the winningest senior class in program history.

Gordon, a native of Davidson, N.C., and Martin, from Birmingham, Alabama, have combined to win 16 team championships during their career, including Vanderbilt’s first SEC Championship and the NCAA Stroke Play Championship both in 2017. They have won five individual tournament titles between them and been honored as All-SEC recipients seven times and All-Americans five times. Last week, Gordon was honored as SEC Player of the Year – just the fourth in program history – while both seniors landed on the All-SEC First Team.

The Commodore pair has been just as dominant in the record books. If it holds, Gordon’s 69.21 stroke average will set a single-season record at Vanderbilt. Martin averaged just 70.76 strokes per round this season. More remarkably, the two seniors head to the NCAA Championships tied for second in Vanderbilt’s career scoring average with identical 70.93 averages — having amassed the exact same number of shots (9504) and rounds (134) in their Commodore careers.

If Vanderbilt’s two veterans have begun to reflect upon their collegiate accomplishments, they aren’t showing it. 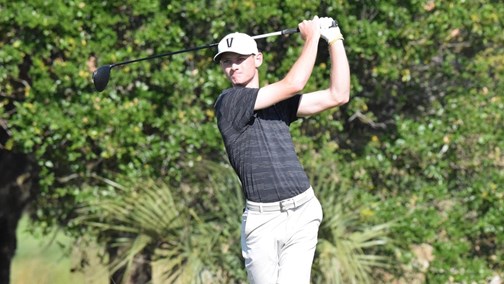 “I think we’re just locked in on what we’re doing right now,” Gordon said. “There are moments of reflection and appreciation of what’s been done here, what I’ve been so lucky to be a part of. But definitely, we’re trying to use all our energy to finish this thing off right.

“I think we’ve had a lot of guys we’ve been able to look up to when we got here and build off what they’ve done. We’ve also had a lot of younger guys who have helped us have a lot of success here. I think looking back on the bigger picture is something we’ll do down the road. Hopefully, we can make the picture a little bit bigger at the end of this year.”

Martin echoed his teammate’s priority, albeit with a slight nod to his final chapter in black and gold.

“I think just having somebody right by your side the same age has helped both of us accomplish things that we both didn’t think were possible when we got here,” Martin said. “Over these four years, every year we sit at Vanderbilt Golf Day and hear the seniors speak. That day [this year], it really signified that it’s a good symbol that things are closing. But, we still have a lot to do.”

The Vanderbilt duo said their college careers have been an ideal blend of friendship and competitiveness. Gordon and Martin both admitted to challenging each other on and off the course, a dynamic that has paid dividends for Limbaugh’s program in the SEC. Last week, the veterans helped the Commodores finished third at the NCAA Athens Regional, which propelled them to their sixth straight NCAA Championship appearance. They hope to finish the job this week as stroke play begins on Friday at the Blessings Golf Club in Fayetteville.

Like his seniors, Limbaugh hopes their Vanderbilt story ends with some NCAA hardware. But with or without a national championship, the coach said Gordon and Martin have cemented their Commodore legacies.

"Those two guys, Will and Patrick, they've really been next-level special," said Limbaugh, who last week earned SEC Coach of the Year for the second time in his Vanderbilt career. "Not just here, not just in the golf scores, but everything about them -- what they represent and just how they handle their business. People that know our program well have often reached out to me in the last month and said, 'Man, what those guys have done, you'll forever be grateful.' "They've changed Vanderbilt golf."