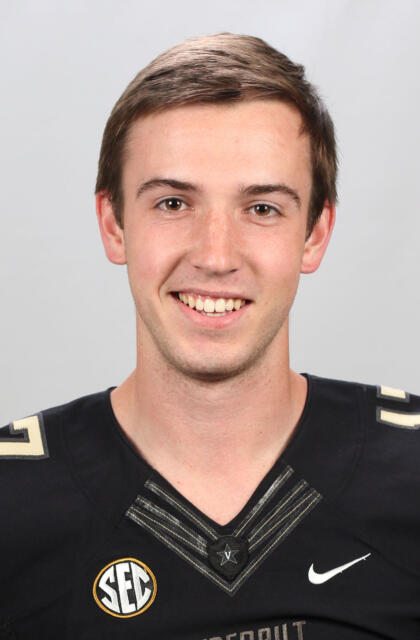 2017
Openshaw completed his fourth consecutive year as the Commodores’ primary placekicker and earned national accolades for his off-the-field activities… Openshaw struggled to match his kicking performance as a junior in 2016… Made three of seven field goal attempts, including a long of 42 yards at Florida… Ended the way with field goals against Western Kentucky and Missouri… Made 39-of-40 extra point tries… Away from the field, Openshaw was named to the Allstate-American Football Coaches Association (AFCA) national FBS Good Works Team and as a semifinalist for the Wuerffel Trophy.

2016
Openshaw enjoyed an All-Southeastern Conference caliber campaign – and one of the best ever by a Commodore placekicker… As a third-year starter, Openshaw converted 15 of 19 field goals… His 78.9 percent conversion rate has been bettered only once (Carey Spear’s 83.3% in 2012) since the mid-1970s… Openshaw was also 11-of-11 inside 40 yards and converted on four efforts from 47 yards and beyond, including twice from 52 yards… He made his last FG attempts, including three at Auburn… Openshaw’s conversions from 52 yards at Auburn and vs. NC State in the Camping World Independence Bowl matched the eighth longest in team history… Openshaw’s 81 points scored ranks as the third highest single-season scoring total ever by a Commodore kicker… His career scoring output of 175 points ranks fifth all-time among Commodores.

2015
Openshaw played in every game, spending much of the year in dual capacity of punter and placekicker… As first-year punter, Openshaw averaged 40.9 yards on 79 punts… Booted a 78-yard punt, equaling No. 6 all-time on team charts, against Missouri… As placekicker, Openshaw converted on 62.3 percent of field goals (12-of-19)… Made 7-of-10 attempts between 40-49 yards… Made field goals of 28, 41 and 34 yards at Ole Miss… All of team’s field goal attempts came in first seven games of season… Also made all 14 extra point attempts.

2014
Openshaw saw action in 11 games, serving as the team’s primary placekicker in his redshirt freshmen season… Made 72.7 percent of field goals, converting 8-of-11… Was 6-of-6 on field goals inside 40 yards… Last two conversions came from 48 and 46 yards… Made all 21 PATs on the season… Also served as team’s primary kickoff specialist during last two months of season.

2013
Openshaw did not see action as a true freshman… Displayed excellent leg strength and accuracy as a placekicker.

High School
Ranked among nation’s top kicking specialists by several services… Started three years as kicker.. Became team’s kicker as sophomore, adding punting duties as a senior… Became school’s first player to earn first-team 6A All-State from writers after making five FGs and 45.6-yard punting average as senior… Also named All-District as senior… Was 16-of-22 on field goals as junior, including team record 56-yarder, as team advanced to second round of state playoffs.