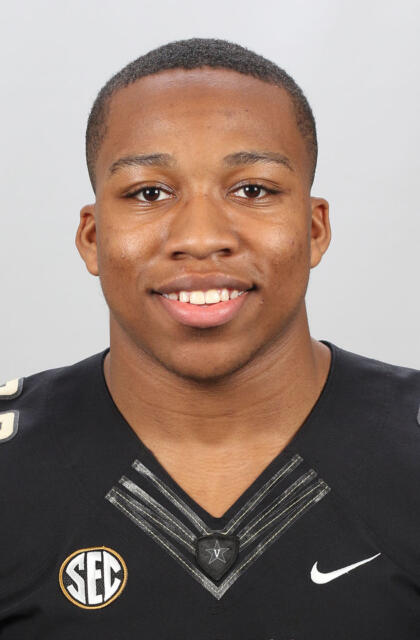 2018
Blasingame made two starts and played in all 13 games for the Commodores… The running back rushed for 401 yards and five touchdowns on 96 attempts while adding 25 receptions for 320 yards and a score… He is second on the team in rushing yards and has averaged 30.8 per game… Blasingame set a career receiving high in the Texas Bowl, posting 85 receiving yards against Baylor… The bowl performance included a first-quarter touchdown catch of 65 yards, the longest of his career… The graduate student carried the ball a career-high 20 times for 70 yards and a touchdown while adding a career-high six receptions and 62 receiving yards in the Commodores’ 38-13 win against Tennessee… Blasingame added an impressive 8.8 yards per carry and totaled 88 yards as part of a 31-27 win against Tennessee State on Sept. 27… Vanderbilt finished the regular season 3-0 when Blasingame scored a touchdown including wins against Middle Tennessee, Arkansas and Tennessee… The back broke runs for 20-plus yards on three occasions including a 35-yard scamper against Tennessee State.

2017
For the second straight year, Blasingame played an important role for the Commodores, contributing on offense and special teams… Blasingame participated in 11 games and earned a starting role at running back the Commodores’ early-season win over Alabama A&M… As the top reserve to all-time leading rusher Ralph Webb, Blasingame produced 147 yards on 45 carries… Best performance of the year came against Alabama A&M – 55 yards on six rushing attempts including a career-long carry of 31 yards… Also contributed six receptions out of the backfield for 52 yards and a touchdown… Nine-yard touchdown pass came at South Carolina… Career-long catch of 21 yards came against Florida… Blasingame also was effective on special-team coverage units, contributing five tackles during the season.

2016
As a first-year contributor on offense, Blasingame played a key role in diversifying the Commodore attack… After moving from linebacker to running back in spring drills, Blasingame played in all 13 games at running back and on special team return units… His presence gave the Commodore offensive backfield an inside-the-tackles power back to go with three-year standout Ralph Webb… Blasingame finished the season second behind Webb with 449 rushing yards and 10 rushing touchdowns on 97 carries… He also registered four receptions… Blasingame impressed in the opener, rushing for 68 yards and a score against South Carolina… Later in the year, he produced career highs with 100 rushing yards and three rushing touchdowns vs. Tennessee State… Notched two rushing scores in victory over MTSU, and added scores in SEC games against Georgia, Tennessee and Missouri… Blasingame posted his final rushing score in Camping World Independence Bowl… Blasingame also contributed at least five rush attempts in 11 games, including a high of 15 carries against South Carolina… A workout warrior, Blasingame also received the coaches’ postseason Lifter of the Year Award.

2014
Blasingame did not see action as a true freshman… Impressed as a scout team safety during fall practices and continued to add strength in the weight room.

HIGH SCHOOL
Two-year captain and two-way starter… As senior, posted 64 solo tackles and pair of INTs as safety for 6-5 Bucks’ squad that advanced to 6A state playoffs… Also rushed for 966 yards and 10 TDs… Earned second-team All-State DB and All-Tennessee Valley DB honors.. Started at cornerback during junior and sophomore seasons… Also lettered as sprinter-jumper in track & field and on baseball squad… Served as school ambassador and member of National Honor Society.

PERSONAL
Khari Thomas Blasingame… Born July 1, 1996… Son of Stanley and Tara Blasingame… Has an older sister, Camara… Dad is an engineer; mom is a podiatric surgeon… Mom is related to U.S. gold medal sprinter Evelyn Ashford… Plays the saxophone… Blasingame earned an undergraduate degree in medicine, health and society in May 2017, and is currently working toward a Master’s of Education from Vanderbilt’s Peabody College.